As the chief cyclist of my family I was tasked by my wife with the job of working out how we were going to spectate at this year’s Tour de France in Yorkshire.

I wanted us to get a decent, close-up view of the riders going past. I didn’t want to stuck in a big crowd somewhere and not be able to see anything.

I’ve ridden in West Yorkshire for many, many years so I knew the area where Stage 2 (York to Sheffield) was going to pass through. It didn’t take me long to pick a destination for spectating: Côte d’ Oxenhope Moor.

The Côte d’ Oxenhope Moor is only a category 3 climb but it was in an ideal place to get to. My plan was to drive to within 4 miles, park the car and then get to the race via a mix of cycling and hiking.

My wife is also a keen cyclist so she was well up for it. Our nearly-two-year-old child would go on a bike-seat and then in a child-carrier back-pack. Sorted. 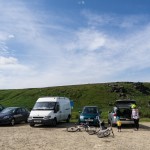 Parking up several miles away from the spectating point. 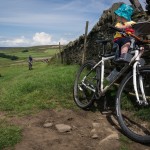 Walkers, cyclists, families. All on our way to watch le Tour. 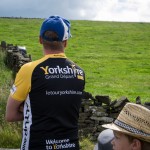 Yorkshire put on one hell of a show. 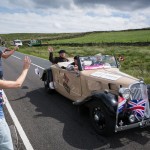 The ‘caravane’ passing through a couple of hours before the riders. 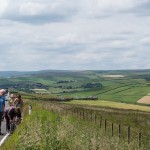 The view down towards Hebden Bridge valley. 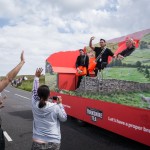 Yorkshire Tea had one of the loudly cheered floats. 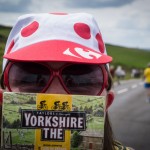 We managed to win the scramble for limited edition boxes of Yorkshire Thé. 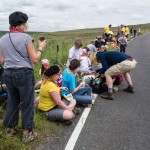 There were some genuine French spectators as well as lots of dressed up Brits. 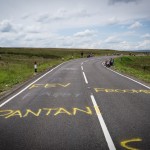 Pantani versus Froome. Who would win? 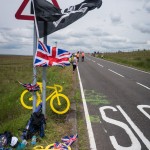 Lots of DIY decoration along the route. 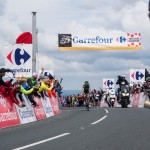 The first rider appears and claims the King Of The Mountain points. 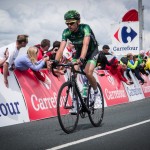 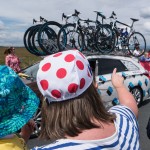 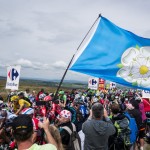 The peleton arrives and whizzes past. And within a few seconds they were all gone.

The plan went pretty well actually. The main ‘problem’ we had was the hot and sunny weather. We’d assumed it would be a bit overcast and potentially showery. Wrong. So it was fairly sweaty work getting us and our toddler over the fells to the race.

The road was lined was fellow spectators. Most were clearly cycling fans but there was a good number of ‘normal’ people there too. Top stuff. The atmosphere was great. Happy smiling chatting people.

Pretty soon the ‘caravane’ started to come past. The caravane is the parade of publicity cars and floats that pass through a couple of hours or so before the riders. Vehicles from all the Tour sponsors, most of which blare our music and throw various freebies out to the baying crowd. The biggest cheers were for the Yorkshire Tea float and the McCain Chips van. It was definitely a British crowd.

We were more than happy with our freebie haul of a King of the Mountains cap from Carrefour and a packet of limited edition ‘Yorkshire Thé’.

As the caravane came past in fits and starts we moved up the road to get to the Côte d’ Oxenhope Moor climb finish line. The crowd was bigger at the finish line but it wasn’t too big. Everyone was afforded a decent view.

Waiting for the riders to arrive was very exciting. Getting scraps of information from fellow spectators, race officials and patchy phone signal to find out when the first riders were going to arrive.

That first rider was Europcar’s Perrig Quemeneur who zipped past uncontested to claim the climbing points. He was in his big chainring and hardly appeared to be sweating. Then a couple of remaining climbers, the team cars and the peloton whizzed past.

Although the duration of this passing is comically brief – the whole thing flies by in less than a minute – it’s this intensity that is the experience of spectating.

In a funny way it wouldn’t have been as exciting if the riders and team cars had passed by over the course of fifteen minutes or something.

Watching the Tour is about the before and the after. The ‘during’ is the peak but it’s not the point.