Even the pros point out obstacles to each other, 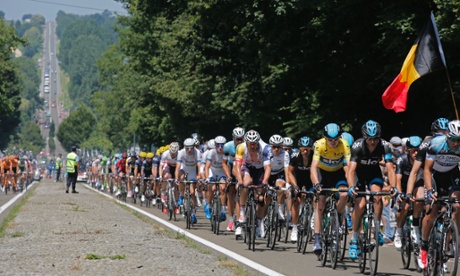 There seemed to be more road furniture than usual in the run in to the finish today but it was great to see the guys on the front were point them out to riders behind. Narrowing roads, obstacles and traffic islands were all indicated and the messages passed down the bunch nomatter what team was behind.

Quickstep mugs them all for Cav’s 25th Tour stage win. 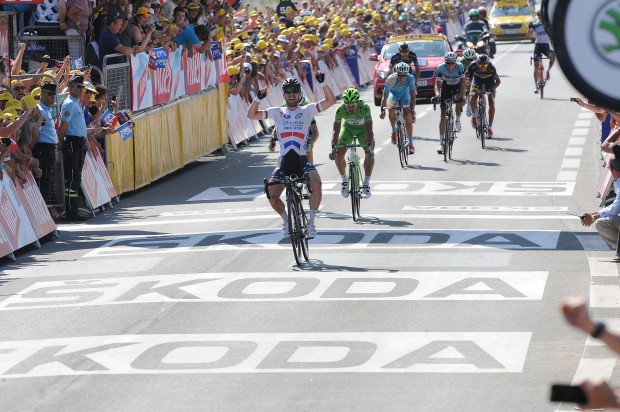 After a 100km attack, then in the last km Cav’s team mate Nikki Terpstra goes under the 1kmn to go banner forcing Cannondale to chase. When they swing off it leaves  another of Cav’s team mates Sylvain Chavanel on the font for the last few hundred metres. When he swings over its Peter Sagan on the font and who’s on his wheel but Cav just sitting ready. All he does is have a quick breather looks round and then he’s gone and Sagan is unable to respond. Easy sprint win for Cav and he knows it!

Watching the Tour on French TV is ace. 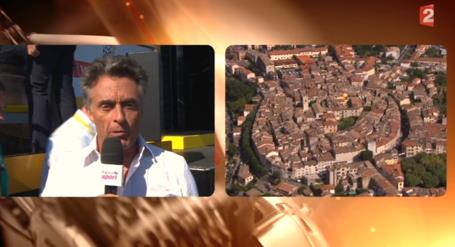 If you get a chance to watch the Tour on French TV you see how they really get behind the event. There are in-depth interviews and analysis everyday and other French sport stars often join in. They show old documentaries of previous visits to certain towns to show the difference and it really shows what a spectacle and commercial venture the Tour has become. 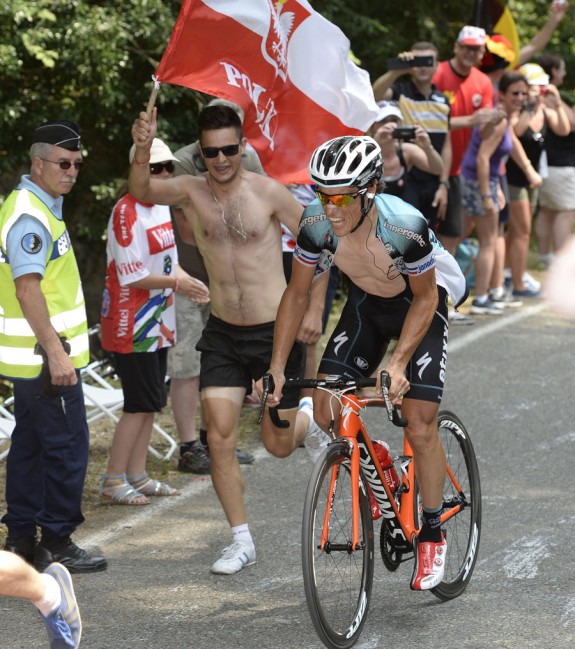 Did you see how many fans were by the aide of the road today? The high mountains are where the fans really get a chance to get up close and personal to the riders. Some have been there too long, had too much sun and/or booze; too much time to prep banners/flags/costumes or get semi naked for a chance to get on the telly. Being on Bastille Day, this weekend is a national holiday in France, lots of people have been off work for a while and taking advantage of the break to come up to the mountains for a few days and enjoy the atmosphere.

A time to reflect. 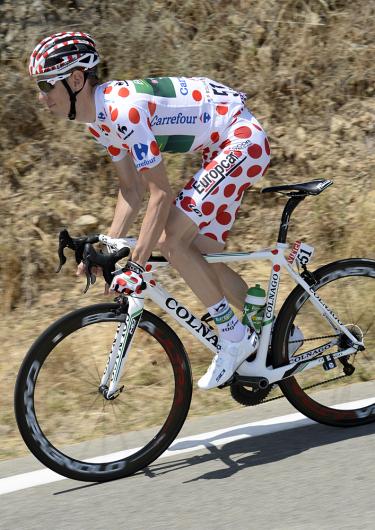 Hopefully now on the rest day Roland will take the time to look at the previous fews days pics and see just how bad his polka dot shorts really did look. Sorry but they’re just wrong!

Unlucky road or what?

Today looked a nervous stage for the top GC men as Contador crashed and Froome wobbled as both took risks. This is the road where Spanish rider Joseba Beloki had a horrendous crash in the 2003 Tour breaking his femur, elbow and wrist and from which he never really came back from. This crash was made famous as it was where  Lance Armstrong went cross country to avoid hitting Beloki and joined the road again on the other side of the curve.