Over the years cycling teams have been sponsored by a wide variety of companies. The early sponsors were bike manufacturers keen to publicise their machines to the public by having the best riders being using them. Fast forward a few years and, with the sport becoming more professional, huge multinational companies started paying big money to have their name on jerseys.

Team clothing became an extension of these companies’ brands and so the jerseys often reflected the packaging or colours of the sponsor as well as their logo.

Teams and jerseys have come and gone over the years but some have reached classic status thanks to being worn on the shoulders of the biggest names in the sport.

Looking at some of these it’s plain to see that it wasn’t just the riders that made the jersey classic but most had a simple or striking design that made them easy to spot in the crowd. Here’s my favourites through the years. 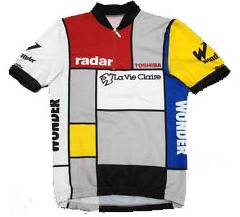 La Vie Claire was a French team sponsored by the French health food chain of the same name and had one of the most iconic jersey designs ever to grace the pro peloton, not just in the 1980’s but ever.

The jersey had nothing to do with the company’s logo or colours but was inspired by the French artist Piet Mondrian with the kit using his simple block colours to perfect effect to create a stylish and easily recognisable jersey.

The team won the Tour de France twice in the 80’s with Bernard Hinault and Greg LeMond taking one each. The team were around for many years but the only change to the jersey through that time was the name change of the secondary sponsor on the chest, the Mondrian design never deviated. 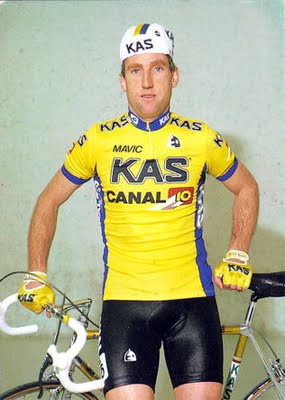 The simple yellow/orange colour and clean logo made it easy to spot and of course having a superstar like Kelly made sure the jersey was seen crossing the line first in some of the world’s biggest races giving it huge exposure. 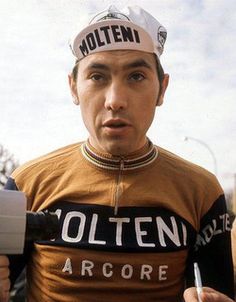 This is arguably the most famous jersey in cycling thanks to it being worn by the world greatest ever cyclist; Eddy Merckx.

Molteni were Italian salami manufacturers who had been sponsoring a cycling team since the 1950’s but it wasn’t until 1970 when Merckx joined that they gained their iconic status. 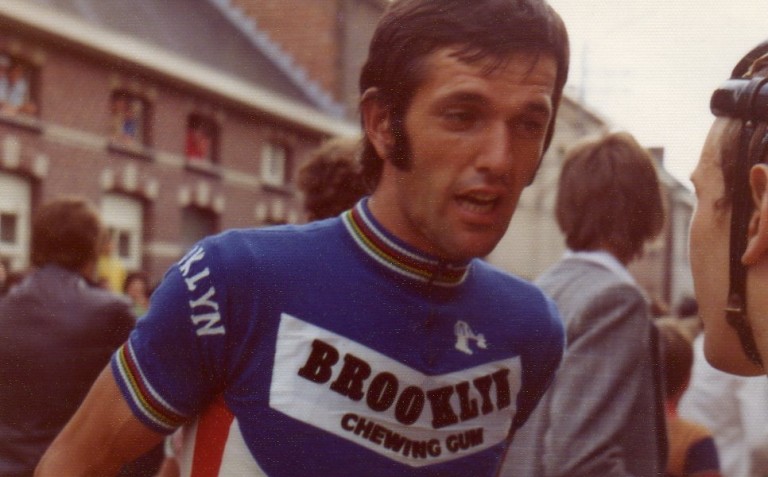 This Italian team were sponsored by Brooklyn Chewing Gum in the late 70’s early 80’s but the team was known simply as Brooklyn. This jersey gained iconic status thanks to one man; the Belgian legend Roger de Vlaeminck otherwise known as Mr Paris Roubaix as he was the first man to win the race four times.

The simplistic and stark stripes and colorways means it stands out as much today as it did when it was first introduced. 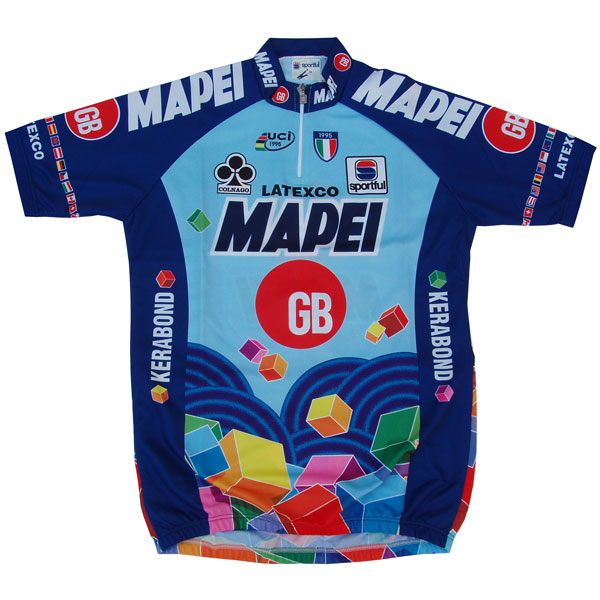 Mapei were arguably the world’s first Superteam sponsored by the Italian building materials company of the same name. The kit was highly distinctive thanks to the multicoloured ‘building block’ pattern (possibly to represent the building aspect) on blue jersey.

Secondary sponsors came and went over the years but the unique coloured blocks were a mainstay.

This team was full to bursting with stars such as Belgian Johan Museeuw and Swiss Toni Rominger. They had a strong Grand Tour team but were really one day specialist with an incredible Belgian contingent for the one day Classic races which they dominated for several years.

Here’s a real bit of cycling pub quiz trivia for you; MAPEI stands for Materiali Ausiliari Per l’Edilizia e l’Industria, Italian for materials for construction and industry. 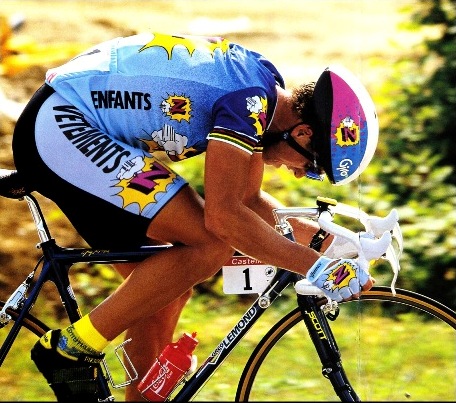 French children’s clothing brand Z had one of the best looking and iconic jerseys of the 1990’s.

American Greg LeMond made them famous by winning the 1990 Tour de France in their blue jersey with the superhero comic style cartoon Z bursting out of it. Still one of my favourite jerseys. 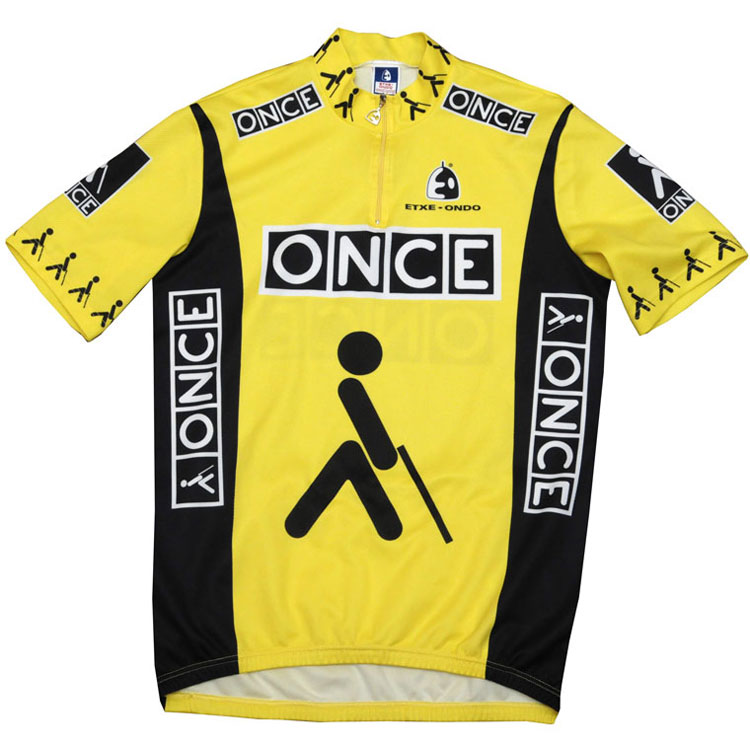 ONCE is a lottery for the blind in Spain and sponsored a cycling team from the 1990’s to 2004. The jersey was a reflection of the company’s simple logo and yellow brand colour.

The only change to the simplistic nature of the jersey over the year was the different secondary sponsor. They had one exception though; during the Tour de France the team would wear a pink coloured jersey identical to their usual one so as not to confuse anyone with the leader’s yellow jersey.

Prolific winners over the years in many of the world’s top races but the Tour always seemed to elude them. 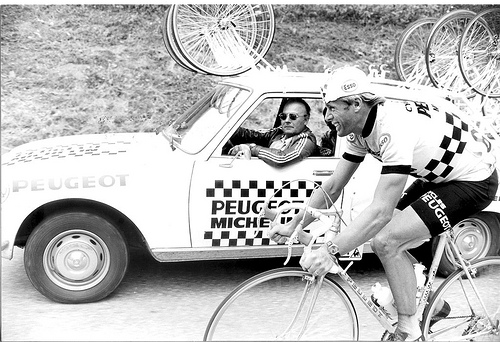 We reckon you know who Peugeot are but we thought we’d bung this team kit in because it is so iconic.

As well as cars, Peugeot used to be a huge bike manufacturer and sponsored a cycling team for many years in its native France.

Some of the biggest stars in cycling rode in the iconic white and black jersey including Britain’s first men’s professional road race champion Tom Simpson. We like the clean lines and use of a chequered flag without it looking odd. 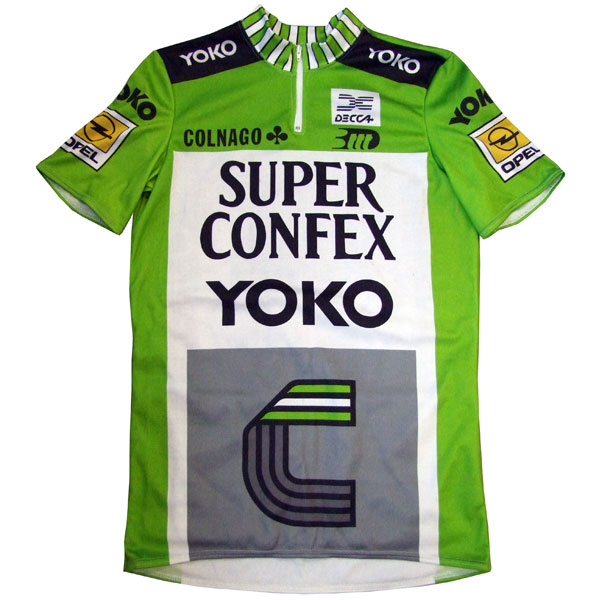 Dutch squad SuperConfex were sponsored by a retail chain and were the first team to create and perfect the sprint train in the late 80’s.

The team were distinctive in their green jerseys and were mostly seen towards the end of a race lining out the bunch and setting up the finale for their star sprinter Jean-Paul Van Poppel. 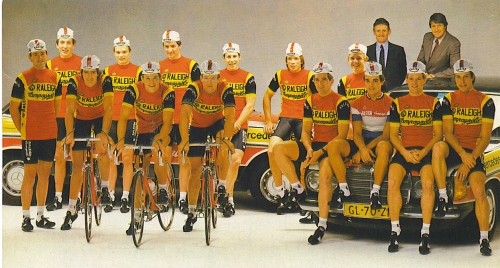 Okay we know Raleigh make bikes but did you know that at one time they were the biggest bike manufacturer in the world?

They have sponsored teams since they were formed but many believe they reached their zenith with the Ti (Tube Investments were Raleigh’s holding group) Raleigh squad in the 1970-80’s.

They were Dutch registered and so contained some of the biggest names in Dutch and world cycling at the time including Joop Zoetemelk who won the Tour de France with the squad in 1980.

It was great to see the Raleigh UK professional team wear an updated version of this jersey for the 2014 season and one we hope will stay.

Compare this lot with the modern day Pro Team Jerseys