Trustpilot Free Delivery on UK orders over £20 Finance Available Easy returns Sign Up To Our Newsletter
Sorry, this product is no longer available!
Magura eLECT Coach Bluetooth Smart Computer is no longer available at Merlin Cycles. However you may find an alternative or updated product below.

Taking over from the ultra-popular Vectra, the Velo Wireless has a great new body and screen design and the addition of Average Speed function takes this top value wireless computer to the next level. Single button operation means simple user interface and the large screen with enhanced digits al...
RRP
Buy Now
View all Cycle Computers
5/5 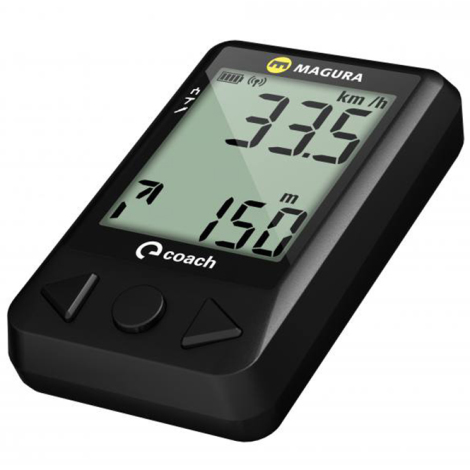 The Magura eLECT Coach - maximum control and information on your handlebars. A multi-functional digital speedometer to control all of your eLECT components, with its own smartphone app.

It connects all of the various eLECT products together, and enables interaction between these products. All key data can be seen at a single glance on the display, and the rider is constantly informed of the status (locked/unlocked) of forks, shock and dropper, and of the charge levels of the corresponding batteries. In a tight race this could be the edge you need.

As a cycle computer, the functional reach of the eLECT Coach is practically unlimited, depending only on which sensors are connected to it via ANT+ wireless technology: speed and distance, cadence, power, pulse rate and much more. If altitude data is also supplied via a smartphone (via GPS and Bluetooth Smart), this can be shown in the highly legible display area alongside the usual ride and rider data.