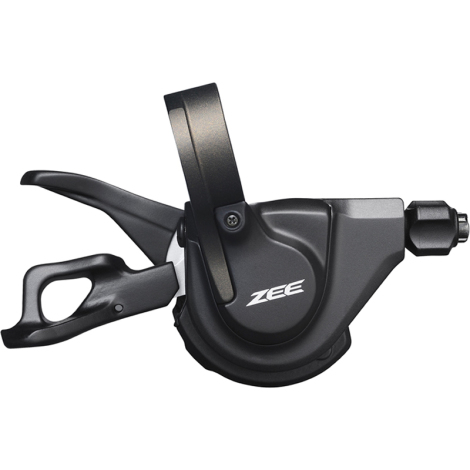 5 / 5
- Read 16 Reviews
RRP
Out of Stock
Add To Basket Email Me
Multi-Buy Savings!
Code: SLM640R
Shimano SL-M640 Zee Right Hand Gear Lever - 10 Speed
Mr Cowie Similar feel and look to it as my early 9 speed XT unit ...not as 'flashy' as more high end units but it works as intended which is quite important really and being Shimano you know its going to last.
Mr Deang Great gear lever, shifting is smooth
Justin Fantastic shifter, brilliant for a cheap 1x10 setup. Easy to use, simple shifter, nice action.
Hardy The triggers are nice, the bar mount is nice, overall seems oversized but feels solid and shifts on point. Great price. Companion lever to the Most Awesome Derailleur EVER!
Lord Healey Like how the down shift can be pushed either way to shift.
Marcelo Franchi Crisp shifting and solid constuction
Mr brown A strong and cost effective shifter when converting to 1x10 set up. Its a lot bigger than an XT shifter though so probably not ideal if your after that minimalist look.
Mr Streak I can't recommend this little shifter enough, I just love them for the price! I don't know why they so cheap compared to slx and especially deore!! Who needs an indicator anyways?
Mr nolting Works like it should! It's nice to not have a window telling me which gear I'm in. Honestly, why are those on there? Is anyone really looking at that? One nice feature that I really liked, you can either use it as a trigger or a thumb push. Since my other shifter didn't have a trigger, I was more comfortable using it like a thumb push. Nice that I can do both if needed.
Mr Healey Really crisp shifitng. Looks good and lighter than the old slx it replaced. Great value for money
Mr Royle Bought as a replacement to my SLX shifter. Worked out cheaper buying a Zee, and it has worked fine, good precise shifting, no problems so far.
Mr Slater Very nice - lovely crisp positive shifting, compared to my old SLX.
Joey B I have these on both my bikes now. At first I didn't like that both paddles were plastic, but now I'm used to them I love them. Excellent action, no pointless gear indicator, and the paddle shape is perfect, I particularly like the little bit on the end of the upper paddle that allows you to run them quite inboard.
Mr Holloway Simple, clean, crisp, wallet friendly shifting.
Mr DUNNE Works. you push the lever it changes gear. Pretty basic with no gear indicator (if you think you need that) it looks like it's going to survive a few falls. I paired this with the Zee shadow+ RD so has a real 'click' feeling to it. Comes with cable, end sleeve selection and crimp - sweet
Noodle First of all, QUICK SERVICE amazing... got in popped the shifter on in the matter of seconds, just cut the supplied outer down to size, put on the ferrels and pushed the inner through.. shifting is simple and quick, everything you'll need for a downhill bike. Loved it so much I might convert all my bikes to ten speed and use this shifter. Really is the nuttz!!!!!!!!!!!!!!!!!