Trustpilot Free Delivery on UK orders over £20 Finance Available Easy returns Sign Up To Our Newsletter
Sorry, this product is no longer available!
Wilier 110 FX GX AXS Full Suspension Mountain Bike - 2021 is no longer available at Merlin Cycles. However you may find an alternative or updated product below. 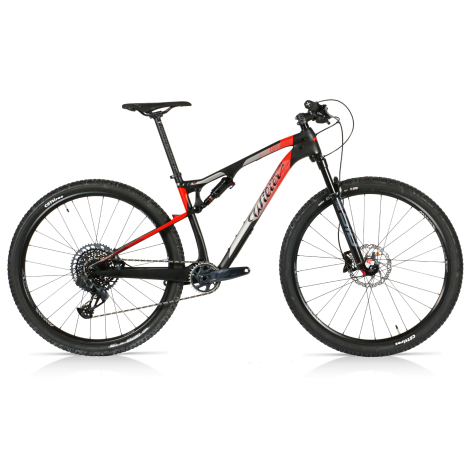 This item was discontinued 7th November 2022.

Code:: E223GCXS
Wilier 110 FX GX AXS Full Suspension Mountain Bike - 2021
At Wilier Triestina, innovation is an irreversible process: the range of off-road bikes is further enhanced by the new 110FX, the lightest full-suspended cross-country mountain bike that Wilier Triestina has ever developed.Agile on climbs and even more stable downhill thanks to its all-new geometry, low weight and advanced boost technology, the 110FX offers even the most demanding riders a truly unique feeling in the saddle.
Boost Stays
The width of the rear hub has been increased to 148mm, the standard boost. This increase in space enables optimal clearance, even with wider tyres (2.3"). The stays are much wider and shorter than on the previous 101FX model, guaranteeing increased manoeuvrability of the bike.
Light
The 60TON carbon monocoque frame weighs just 1690 gr. in the M size.
New Cable Routing
The internal cable routing has been overhauled to accommodate the brake, gear and rear shock absorber cable housings, rendering the 110FX ready for use in any type of configuration.
Frameset
Wheels
Drivetrain
Components
Geometry Information