Even if your cam isn’t a GoPro or Garmin there are some fundamental Top Tips that are applicable to all helmetcam shooters.Helmetcams are small digital camcorders that you can wear on your person, usually your head or chest.  They record footage to a memory card.

They’re known as helmetcams due to the location of where they’re typically worn. They don’t have to be worn on a helmet. They can be mounted on various places on the bike. They can also be used handheld or on a tripod just like regular cameras.

High end cams from companies such as GoPro or Garmin offer virtually broadcast quality HD footage with exceptionally good lenses up front. They also have a degree of manual control as opposed to just fully automatic all the time.

1. Try to have someone else in the shot

Riding footage is much more interesting when you can see someone in the frame. You’re more likely to capture a crash that way too!

Due to helmetcams having extremely wide angle lenses they can make anything that’s more than 10 feet away look very small. Don’t get dangerously close though!

If possible. An issue with the common on-top-of-head mounting position is that it really flattens out the perspective. Even steep downhills look flat and slow. Try mounting the camera on your chest or even on your bike.

4. Mount the camera in the middle or rear of the bike

Bike-mounted cams can suffer from wobbling, resulting in jittery messy footage. If you want to shoot some on-bike footage then it’s better to mount the camera in the middle or rear of the bike. Avoid bar- or fork-mounting your camera unless the terrain is super smooth.

Point the camera behind you every now and then. Again, ideally with someone riding close-ish behind you.

Shoot with the camera off-the-bike. Take the camera off the bike (or off your body) and use it like a regular video camera to record some footage of someone riding through a shot. Try to keep the camera still ie. don’t pan as riders go past, let the ride enter, pass through and exit the frame.

When shooting off-the-bike/body try not to do it handheld. Wobbly video is awful to watch. Stable footage is the goal. You don’t need a tripod (although you can get dinky ones that are great), simply place the camera on a nearby rock, wall, fence or even just on the ground.

8. Keep the tyres in shot

Even if it means cutting people’s heads off. The tyre-meets-surface is what cyclists like to see.

If your camera has a White Balance setting, set it fixed to Daylight (or 5500K in techno-speak). Consistent colour footage is easier to edit and nicer to watch.

The world doesn’t need another 10 minute YouTube of uninterrupted helmetcamming. The human eye and brain like things to change every few seconds, or they switch off. No individual shot should last for more than 10 seconds really. 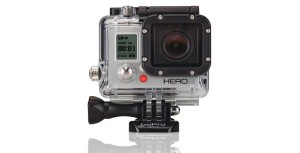 Have a look at our range of helmetcams and mounting accessories

One comment to “10 top tips for helmet camera users”