Details of how the pros change their bike builds and set-up for the iconic cobble race.

Watching Paris-Roubaix you’d have noticed most of the bikes looked slightly different to the riders’ usual svelte lightweight machines. That’s because this race gives the bikes the worst beating they are likely to get in one day. Lightweight bits are substituted for durability and moreover, comfort and control. 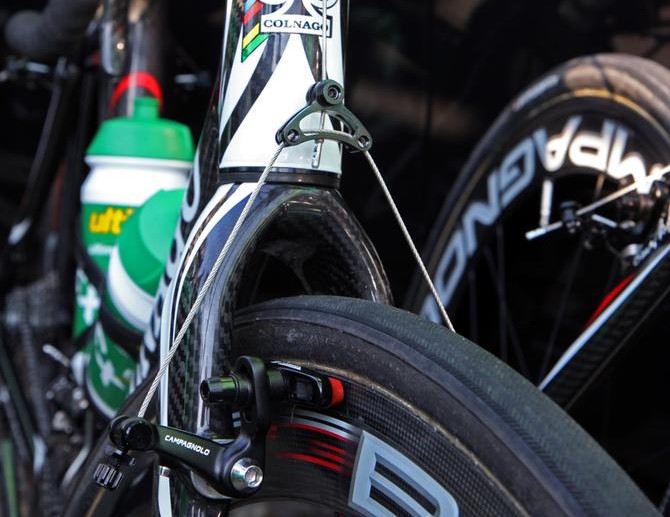 The 27 sections of cobbles totalling 52.6km gives bikes and riders an unrelenting pounding, so riders prefer bikes that will work over the entire course and won’t shake them to death.

This means lots of changes – both subtle and substantial – depending on individual’s preferences and their sponsors’ products.

The most obvious equipment change is the use cyclocross bikes. These have cantilever brakes so wider tyres can be used. Lightly buckled wheels don’t catch on the frame either.

Cyclocross frames are also longer in the wheelbase for greater stability over the cobbles. They’re slightly slower on the tarmac but over the course of the race the stability is prized more by some riders.

Some riders also use additional cyclocross brake levers underneath the tops of the handlebars allowing braking while the hands are on the tops.

Wider tyres than normal are used. All of them tubular, which can run at lower pressures without puncturing. 27mm is the norm at Roubaix (normally 20-23mm tyres are used for pro racing). Some riders go up to 30mm.

No slick tyres here. All riders’ tyres will have different tread and rubber compounds depending on rider preference. Tyre pressure goes down from 130psi to around 50-70psi to avoid skittishness on the cobbles but boy, they will notice the difference on tarmac!

To compensate for larger tyres some bikes have a higher rear brake bridge and run Shimano long reach brake callipers which are usually found on winter bikes to allow for mudguards.

Frames are often tweaked for Paris-Roubaix with slightly different geometry e.g. higher head tubes for more comfort. Sometimes even different carbon lay-ups are used to aid frame strength and improve comfort at the expense of weight or stiffness.

You’ll often see more relaxed prototype versions of stock frames tested here which end up being released to the public – with few changes – in the season afterwards.

Handlebars are double taped with some having gel strips along the tops as well, it’s not uncommon for riders to have massive blisters on the palms of their hands after the race and losing feeling in their hands and arms for a couple of days after the race. Winners say that adrenaline is the only thing that gives them the strength to lift the trophy cobble on the podium.

Riders and mechanics aren’t too snobbish about what groupset tier their stuff s from, as long as it works on race day it’ll do.

As the race is not very hilly, the inner front chainring is changed to a 44 tooth while the outer stays at a standard 53.

Chain catchers are used to keep the chains in place. Even if the riders don’t change from large to small ring on the front the catchers are still useful for keeping the chain on over the rough stuff. Watch any slow motion shots of the riders hammering the cobbles in the big ring and you’ll be surprised how much the chain still jumps around.

Some riders opt for mechanical groupsets over electronic versions but there doesn’t really seem to be any real reasoning behind this besides traditional and fear of new technology!

Having said that, there’s no better endorsement of the mechanical Shimano Dura Ace 9000 groupset than from winner Fabian Cancellara who uses a mechanical version for his cobbled classics campaign.

Wheels receive special attention. This is because they get a battering. Many teams build specific wheels which are only used for Roubaix.

Many teams forgo their sponsors’ minimal-spoked products to build old standard 36 spoke rims and badge them up as something else. Although there were a lot of aero carbons about on race day, you’ll notice that all spare wheels handed up or on the neutral service bike are standard rim and spoke combos.

Bottle cages are another item often overlooked but crucial on race day.

Carbon and light alloy flexy cages are ditched in favour of strong, often steel, cages. A bottle popping out on the cobbles can cause almighty crashes but more importantly the riders need to keep hydrated and need to know the bottle will stay in place, especially towards the end of the race where being dehydrated could cost them the race.

The debate whether a cyclocross or a road bike is best for the Paris-Roubaix rages year after year.  A ‘cross bike is more durable and comfortable over the cobbles but slower on the road. The road bike is faster but section after section of cobbles takes its toll on kit and rider.

It does go to show though that cyclocross bikes can be more versatile than just racing or mud-plugging during the winter. With the right set up a cyclocross bike can be used on the road all year round as well as off-road.

At Paris Roubaix, it’s usually a mix of both worlds depending on what the rider prefers. But just to confuse matters further, after 260km the win can come down to a track sprint on the Roubaix Velodrome.

So maybe they should have been riding fixed wheel..?