The last few weeks have seen the unveiling of four new groupsets from Shimano and Campagnolo, these will become available in the next few months. Here at Merlin Cycles we get as excited as anyone about the lovely new shiny stuff. So amongst all the new product ‘bells and whistles’, what are we really looking forward to? 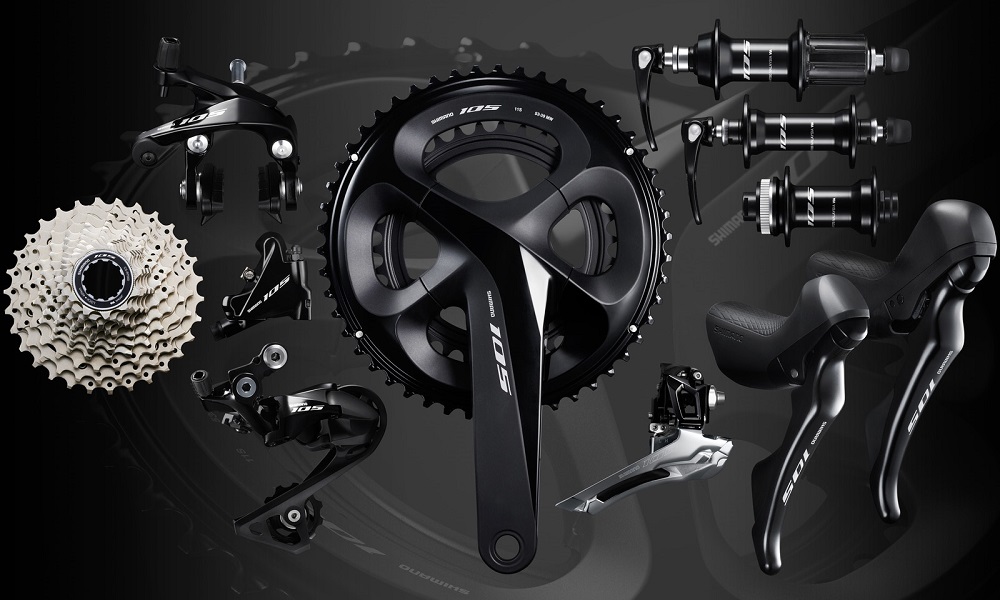 The trickle down becomes more like a flood for the Shimano latest 105 series, with the styling and performance benefits coming in like a raging torrent direct from the Dura Ace 9100 and R8000. Just like the previous 5800 generation, the new R7000 groupset components are available in a black or classic silver finish.

As the worldwide move towards disc road bikes continues, R7000 gets a full disc groupset option with all new flat mount calipers and new 140mm rotors. These will plug the current gap in Shimano’s line up for lower level hydraulic braking. 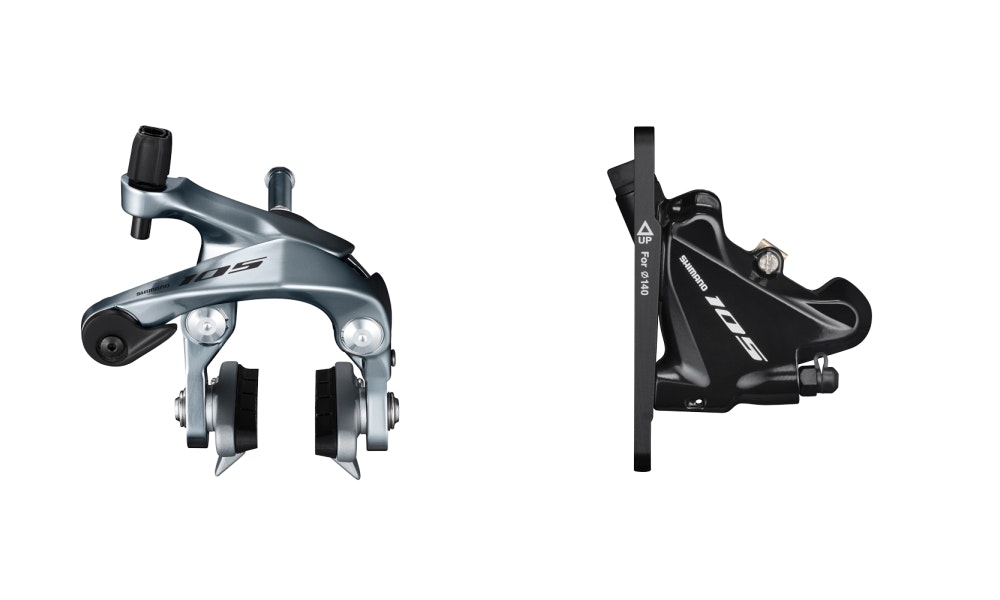 The R7000 cassette gets a wider spread of gears for the more popular mixed terrain market, with options such as 11-30 and 11-32. The CS-HG700-11 version will also fit 10-speed freehub bodies – Hope you haven’t chucked your old favourite 10 speed compatible wheels… 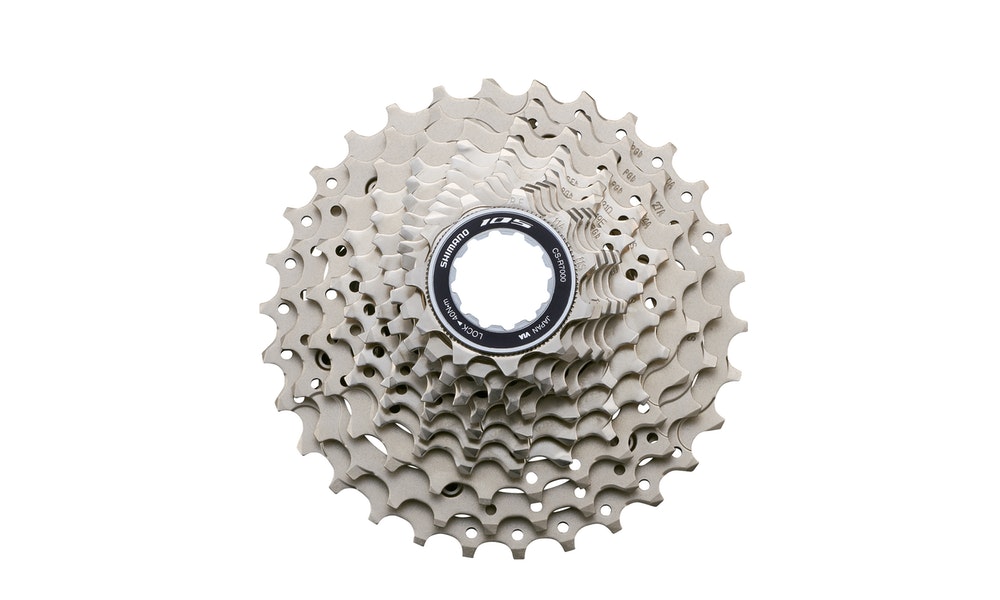 The new chainset features an asymmetrical design, mirroring the R8000 and 9100 series chainsets. The new chainset will feature the usual 50/34t, 52/36t and 53/39t chainring options. The pedals which will accompany the group have shed around 20 grams from the previous 105 design through the use of carbon fibre in their construction, they also feature a lower stack height. 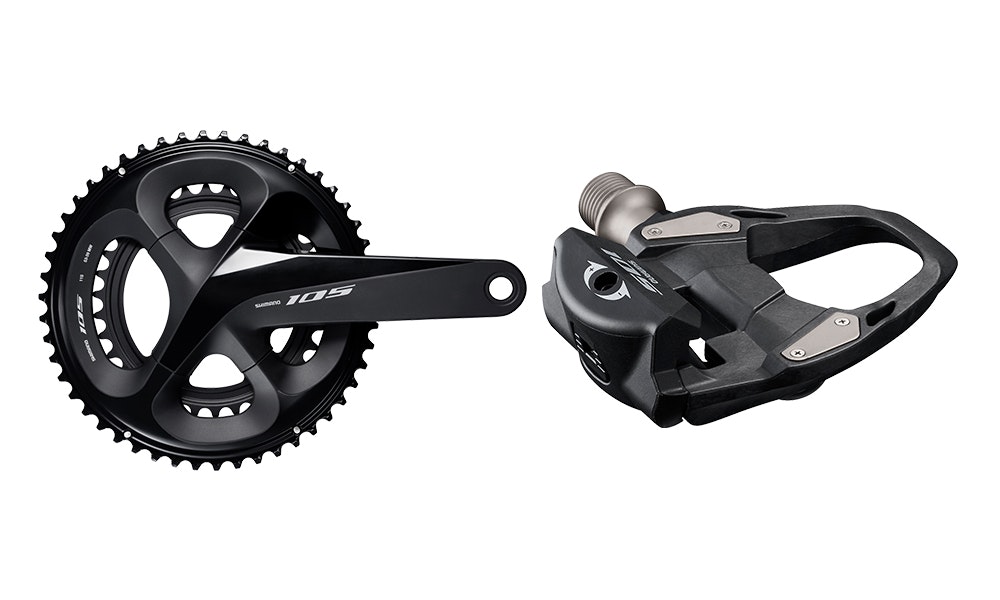 Flexibility is the watchword for the new R7000 shifters. The new hydraulic version replaces the RS-505 levers previously found on entry-level disc road / gravel bikes. There are two versions of the disc brake shifters available for both regular and smaller hands (R7025 version). 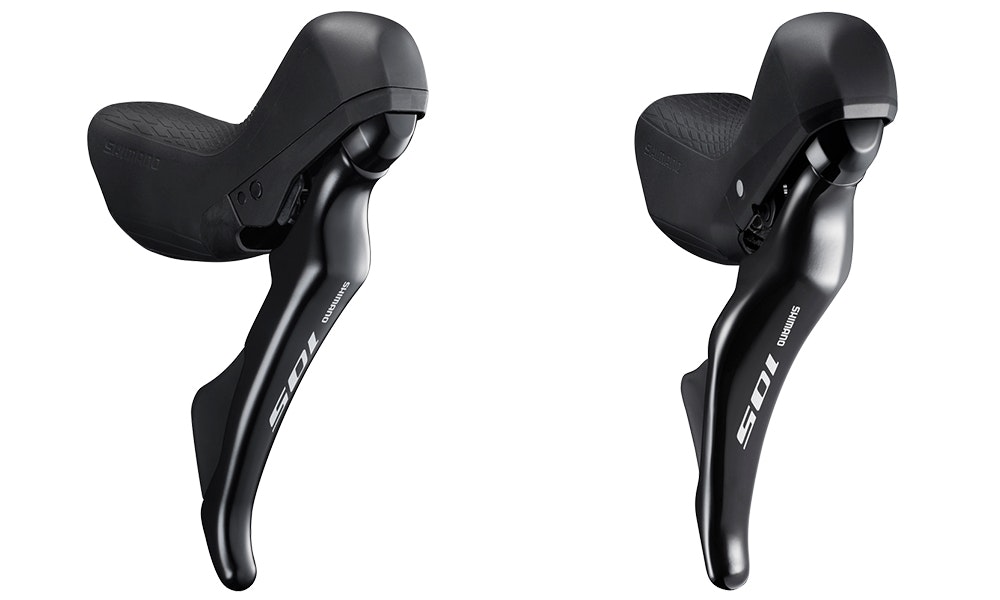 The new R7000 will feature similar design and features to the R8000 and 9100. On the front mechanism, the arm for the cable clamp has been merged with the linkage. Cable tension has been integrated into the derailleur. The R7000 front derailleur offers a more compact size for more useful tyre clearance on gravel and cyclocross bikes.

The R7000 rear derailleur shifts to the Shadow style design as found on its big brothers. This design increases shift stability, reduces risk of damage in a crash. The RD-R7000 is available in short cage (for 11-25t to 11-30t cassettes) & long cage capacity (designed for 11-30t to 11-34t cassettes). 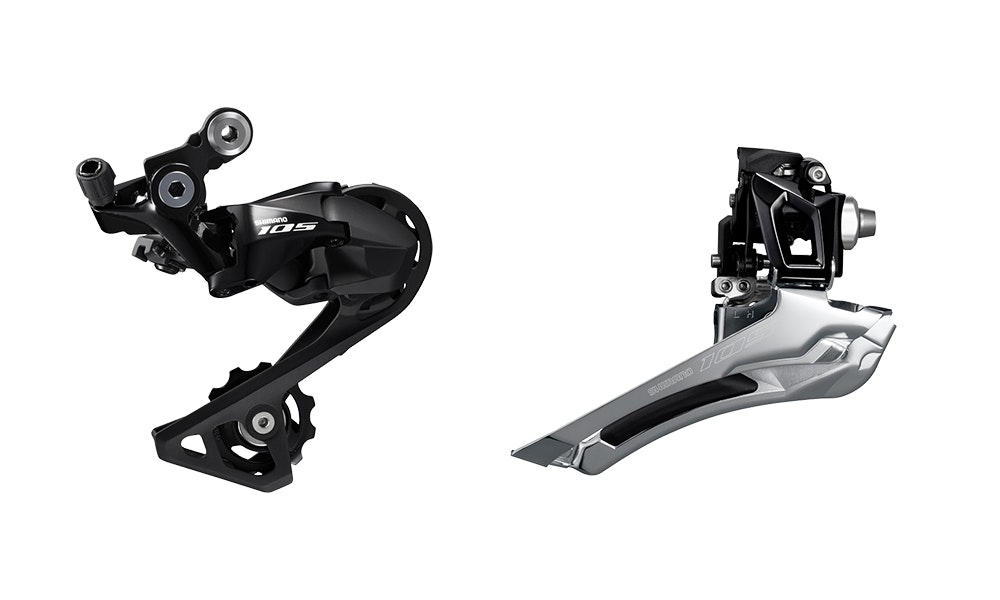 After turning the dial up to 11 before the competition, Campagnolo have gone and done it again. 12 Speed Campagnolo for the road is on the way. So aside from the extra gear, what else is there in the 2019 Record and Super Record groups?

Campagnolo’s disc brakes revealed in 2017 will be an option for record and super record groups. Shifters have been redesigned, retaining the comfort and practicality of the old levers – the class leading multishift capability is still there – 5 downshifts or three upshifts in one sweep of the lever. Adjustability of levers allows smaller and larger hands to find the same high level of comfort and performance in the levers.

The traditional non-disc calipers have been redesigned and are now capable of fitting 28mm wide tyres, reflecting the shift in consumer demand towards wider wheels. The redesigned rim brake calipers are also stiffer and are said to offer improved braking performance over its predecessor.

The Record and Super Record rear derailleur features a new longer body, new parallelogram geometry, and together with a longer pulley cage. The jockey wheels themselves have stepped up to 12 teeth. The top wheel has larger teeth to move the chain across the cassette with more efficiency.

The new front gears also feature many changes. Campagnolo has separated the cable lever arm and the outer parallelogram plate. No longer one piece, the cable arm now pushes on a tab halfway down the derailleur body plate. The pivot point positions have also been moved. Campagnolo reckons this helps to keep a straighter chain-line and a more linear movement of the front gear itself. 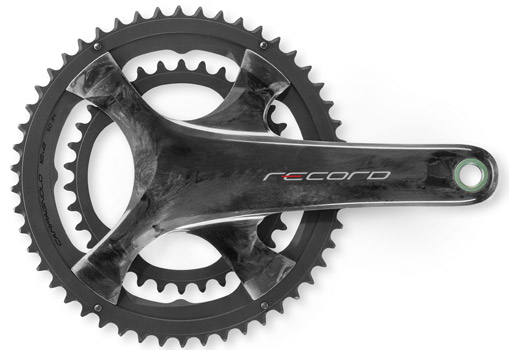 The new Record and Super Record chainsets feature new developments which improve both how it looks and performs. The drive side cranks has been smoothed over for better aerodynamics and a new backing plate increases stiffness. The chainrings feature a new, more rounded profile together with a new anodized finish for improves aesthetics and durablility.

As well as adding another sprocket, both the Record and Super Record cassettes have been significantly redesigned. The Record cassettes, have the six smallest cogs are traditional individual sprockets, the largest six sprockets are split into two groups of three. The groups of three are each machined from a single block of steel which is claimed to reduce weight, and increase durability.

There are two cassette size options to choose from, 11-29 and a wider 11-32. The new cassettes fit the existing 11-speed freehub bodies, the plates are narrower and stacked differently to the cogs found on 11-speed groups. Because of this, a new chain was required. Links are a little shorter and the chain narrower, Campagnolo claim the 12-speed chains will offer the same durability as the previous 11-speed chain.

Campagnolo reckon they have achieved their best groupset performance through redesigning the derailleurs and levers. However, they claim that a huge element of this improvement in performance is down to new cable housing which drastically reduces friction.

The off-road transition to 12 speed continues with the new wave of Shimano XTR. In order to compete with Sram in the MTB world, this was largely inevitable. So aside from another sprocket, whats new? 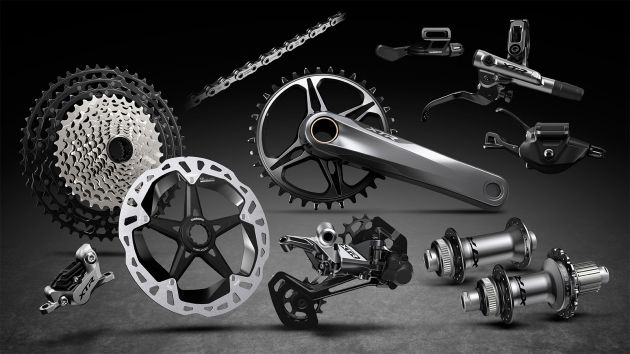 Shimano have split their top end group into two key areas for the high-end use – Cross Country and Enduro.

While the previous version of XTR featured a Di2 option, this is the glaring omission from the XTR 9100 group. A Di2 option could well be a ‘mid-term’ addition though in the next few months? We will have to wait and see.

In order to be able to go to a 10 tooth sprocket on the 12 speed cassette, a new freehub, featuring Microspline technology, has been developed. The new technology in the hubs doesn’t end there. Shimano have got rid of the ratchet sound from the freehub sprung pawls too, through what they have named ‘Scylence technology’ – as the name suggests this will virtually run silently. 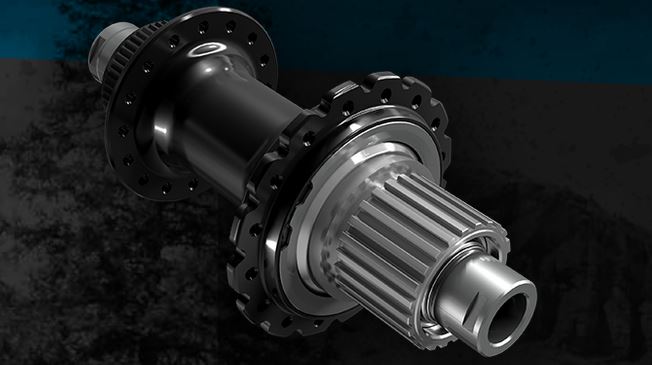 One area where Shimano were playing catch-up with Sram was with gearing options. The new 12 speed gearing options in the latest XTR series, would indicate that Shimano are fighting back.

Shimano wanted equal gaps between gears to offer riders an optimal cadence regardless of the gear. The result is a 51T sprocket, which featuring equal gear gaps of 6T in the last three sprockets. For riders not requiring such an extreme range, a 10-45T 12-speed cassette is also available.

The latest XTR cranksets now use direct mount chainrings. These save up to 80g in weight on the M9000 version as a result. Single-ring chainrings are available from 30T-38T. Enduro riders also have the option of the M9120 crankset which is said to be a lighter stiffer, and a little wider to increase clearance on wide-set frames.

For front changer fans, there is a 2×12-speed crankset that features 38-28T front chainrings. Using such a setup will require a specific derailleurs. 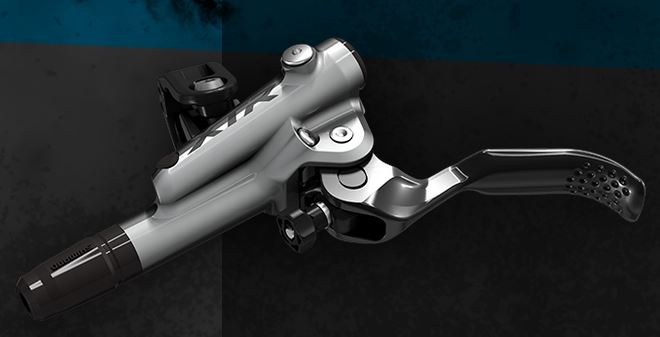 Both Enduro and XC versions feature redesigned brake levers with a repositioned clamp band and lever body. The clamp moves centrally on the lever body which is supposed to create a stiffer brake, and improvements in feel and control.

On the XC brakes, a simplified lever saves weight. The contact point has been reduced, for more immediate braking control. At the caliper, an improved hose entry reduces weight, the two piston caliper features the same brake pads as the last model.

The more heavy-duty M9120 Enduro brakes provide tool-less lever reach adjustment on the lever, as well as adjustable free stroke. While not new to this update, the Enduro brakes also have a power-increasing technology, known as ServoWave, this increases the amount of fluid squeezed to the caliper when the lever is pulled. The caliper features, a brand new four-piston design for increased power, larger pads are sure to assist with durability and cooling.

Rotor designs are also new, both reducing weight and increasing ing heat dissipation. The 140 and 160mm rotors reduce weight by 5g and 10g. The 180 and 203mm rotors are reckoned to run 20°c cooler through long, hard braking efforts.

Shimano has updated its shifter design for XTR M9100 to increase shifting efficiency through improved handlebar ergonomics. The latest I-Spec-EV design gives 14 mm of lateral sliding range and 60 degrees of rotational positioning to enable riders to find their ergonomic hand position sweet spot on the shifters and brakes.

For front mech fans that could be partial to 2 x 12, the front left-hand shifter also features a simpler design, utilising just one lever to shift up or shift down. 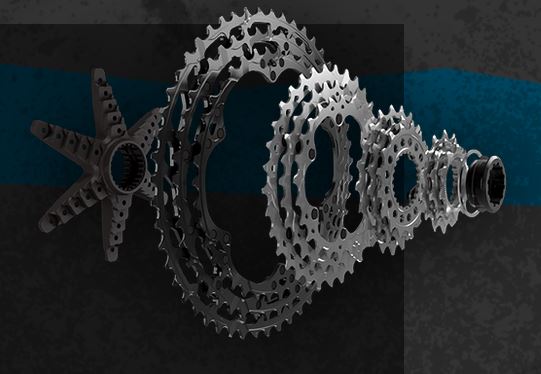 The great news is that many riders 5 year old plus groupsets are still performing pretty much flawlessly, many after tens of thousands of miles, this makes us wonder, how much more reliable / lighter / nicer looking can groupsets actually get?