Flat pedals are a great example of how something without many features or moving parts can still be a component that varies wildly in performance.

In fact, often with flat pedals the looks can be deceiving. Pedals that look like they’ll be good turn out to be poor. And pedals that look rather innocuous end up being brilliant.

Here’s our guide to what we think makes for a good flat pedal.

A word about shoes

Yes, I know this is supposed to be about pedals but shoes and pedals work together to do the job of pedalling and – more importantly sometimes – controlling your bike. 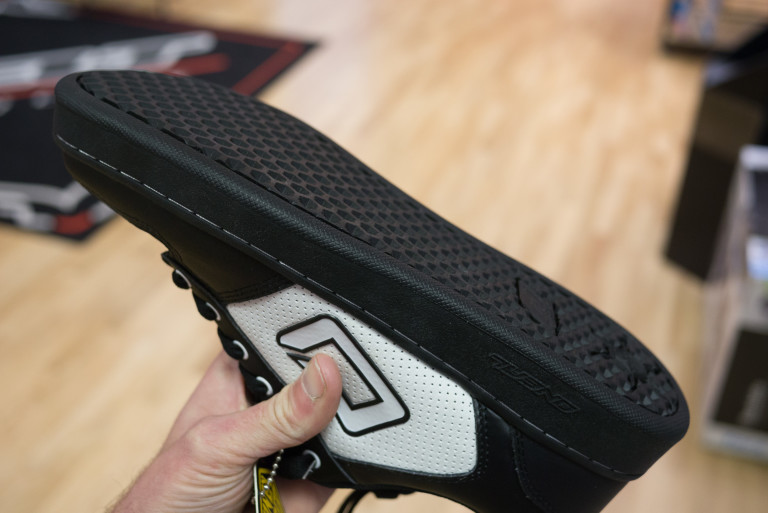 Flat pedals like flat shoes. Flat soled shoes are vital for grip. The pins on the pedals need a consistent and even surface to dig into. Knobbly soled shoes just introduce gaps and dips into the shoe-pedal mix and the amount of engaged pedal pins is massively reduced (and thus grip).

Knobbly soled shoes don’t grip on to flat pedals very well at all. They slip around, bounce off and are generally rubbish. A cheap pair of skate shoes will perform better than a £100 pair of aggressively treaded hiking shoes or trainers. 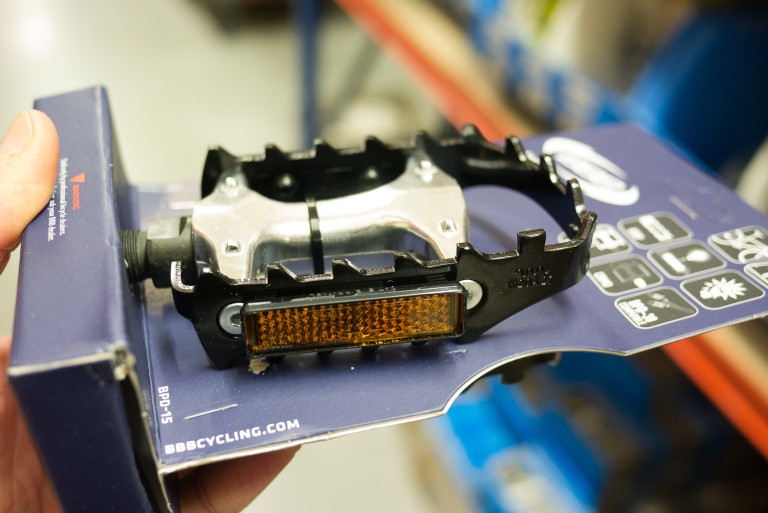 Don’t go for ‘bear trap’ caged-style pedals that have teeth-shaped prongs on them (see above pic). They don’t grip very well, they’re very uncomfortable to pedal and they will do serious damage to shins.

Go for flat, slab-like pedals that have numerous pins on each side. 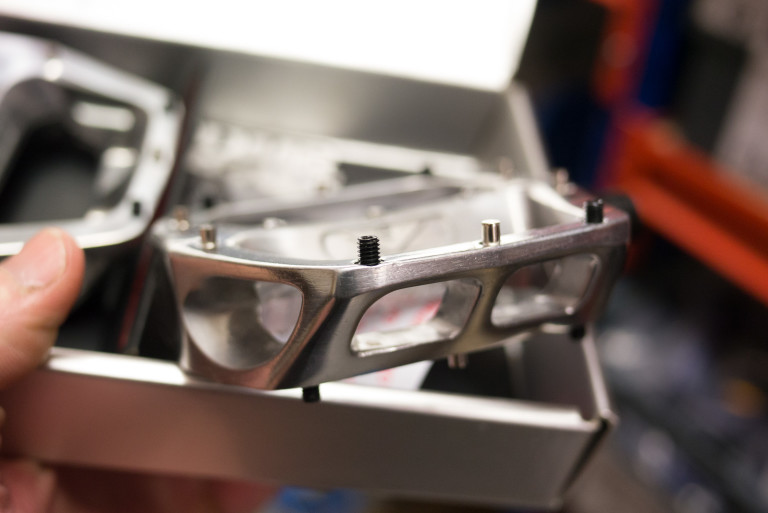 Thin pins are grippier than thick pins but they are more easily bent on rocks and roots. Generally though, avoid fat pins as they don’t dig into soles sufficiently and they tend to round-off and blunt over time.

Short pins aren’t very grippy BUT some people who wear extremely tacky-grippy shoes prefer the feel of them. Generally though, longer pins are grippier for most occasions. 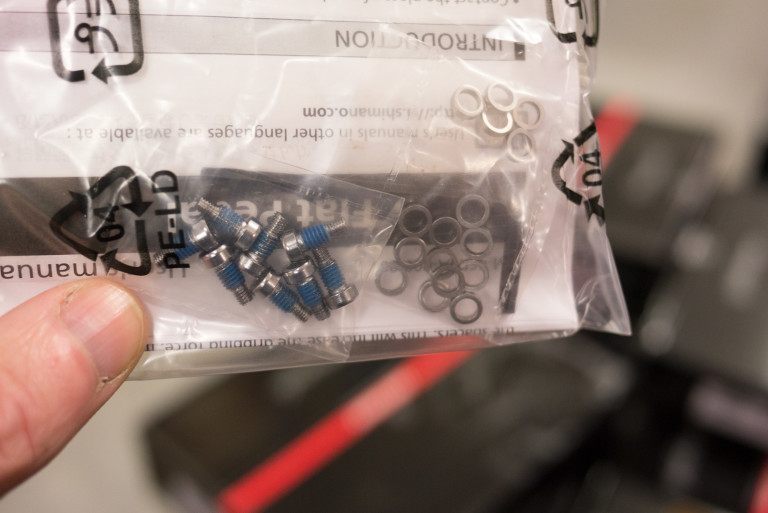 Some pedals come with the option of running short or long pins – or a mixture of the two if you so wished – so check the spec first as this can be a really useful fine-tuning feature. 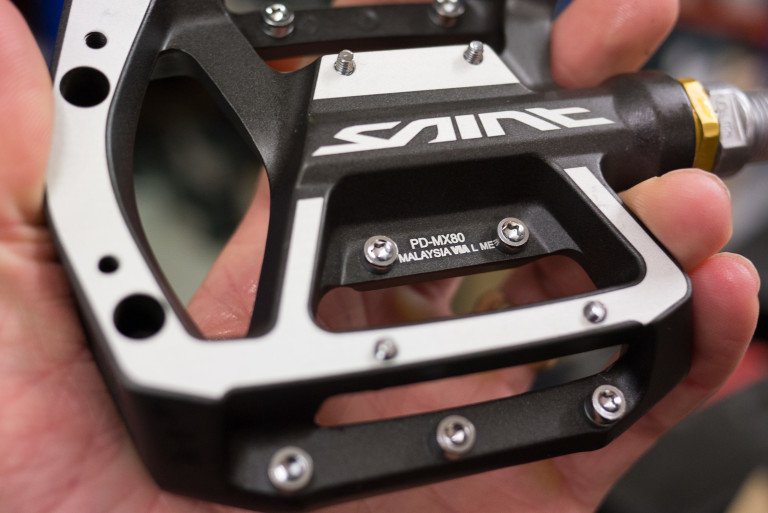 Removable/replaceable pins are a good feature. Most unscrew via an Allen key hole on the top of the pin itself which unfortunately often gets damaged and this makes it hard to unscrew the pin. There are some pins that unscrew from the back side of the pin which don’t suffer from this issue. These are usually on more expensive pedals though.

Generally speaking, larger (wider/longer) pedals will be more consistently grippy but there does come a point where ground clearance becomes an issue for some riders. 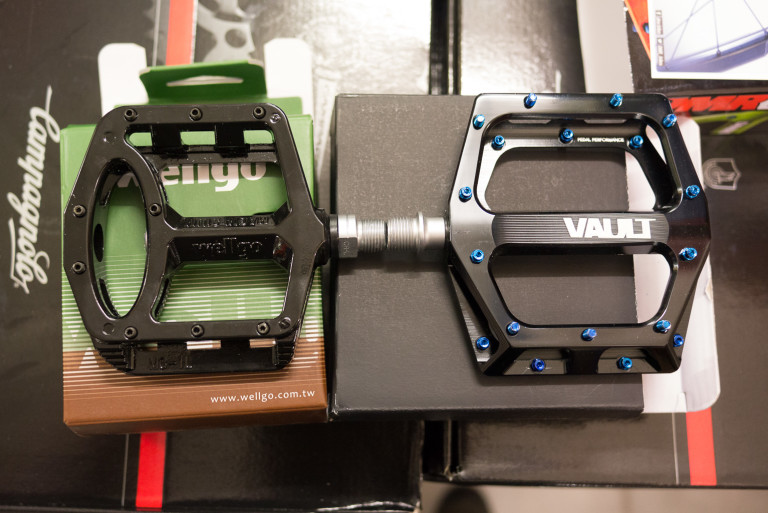 Having said that, I’d always prize grip and feel over pedal strikes so I’d say go for big pedals. You’ll learn to live with the extra width and be able to predict and deal with potential ground clearance issues.

The thinness wars had up until recently been raging in the MTB industry. Having the thinnest pedals you could find was the thing to do. 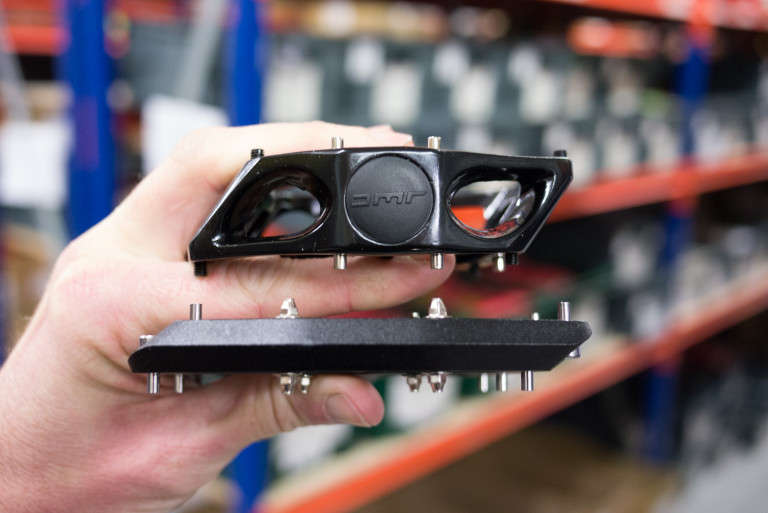 Although these wars have calmed down a bit, it was a useful movement. Modern thinner pedals offer greater ride feel and bike control than older chunky pedals.

It’s to do with where your foot lies in relation to the pedal axle (and the bike’s bottom bracket too generally). Thin pedals feel less ‘roll-y’ than chunky pedals. You feel much more ‘in’ flat pedals than ‘on top’ of them.

It is possible to go too thin. Bearing durability becomes compromised. So too does ride feel; mega thin pedals lack the foot-cradling concavity of fatter pedals.

So, go thin. But not too thin. 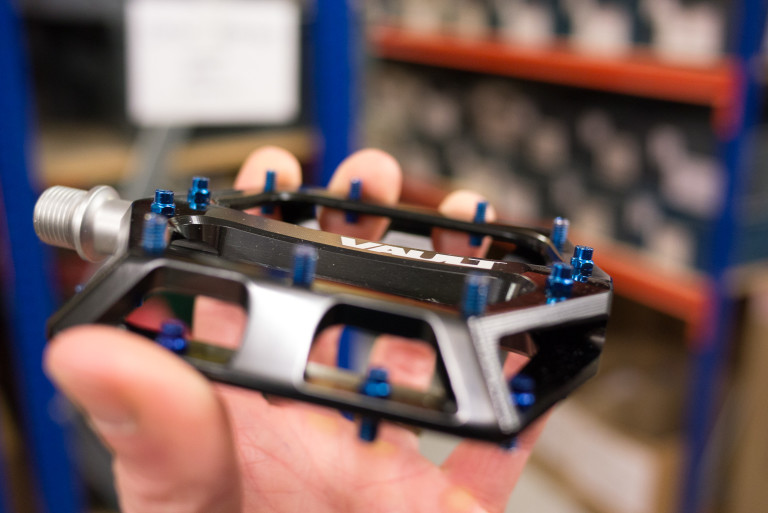 As I just mentioned, the concavity of a flat pedal (see above pic) is important to its feel and performance. To a degree this can be personal preference. Some riders like chunky pedals with a deep concave, others are okay with super thin pedals with virtually no concave to to them (see pic below). 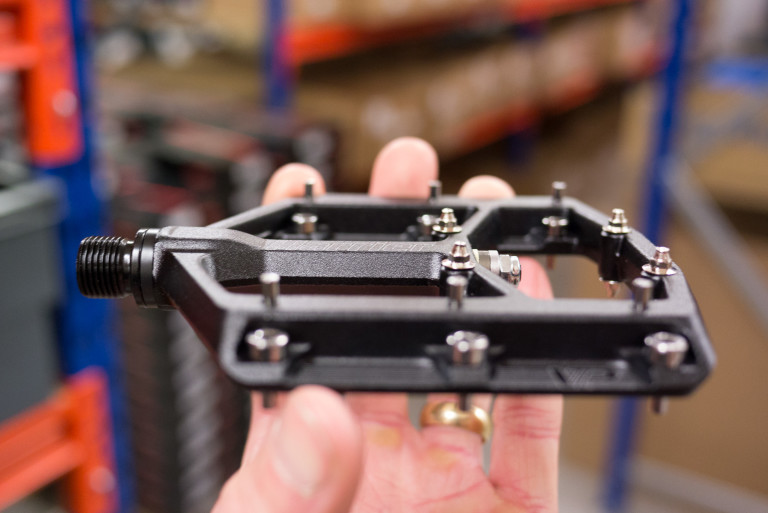 If you’re looking to get your first proper/decent set of flat pedals then I’d advise going somewhere between these two extremes ie. a pedal that’s less the 20mm thick and has a subtle bit of concave centre section.

Pretty much all decent flat pedals are made of metal. Cheap and mid-range pedals will be steel, some mid- and high-end pedals will be aluminium, top-end pedals can be magnesium and even titanium (lighter but significantly more expensive).

There has been a recent spate of pedals being made from plastic, either in part or entirely. 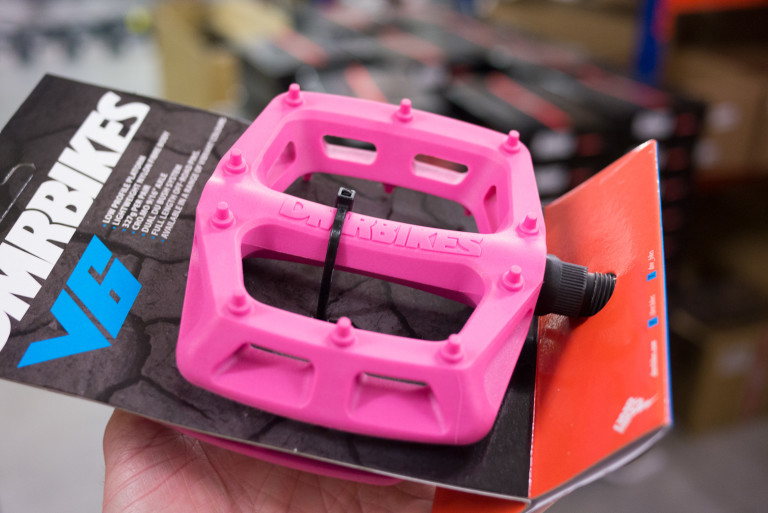 Entirely plastic pedals are a great way of dipping your toe into world of flat pedals. They’re cheap. They’re light. They grip just as well as metal pedals (to begin with anyway). The issue with them is that the pins aren’t replaceable (the pins are part of the pedal mold) and the pins are also a bit more fragile on rocks and roots. 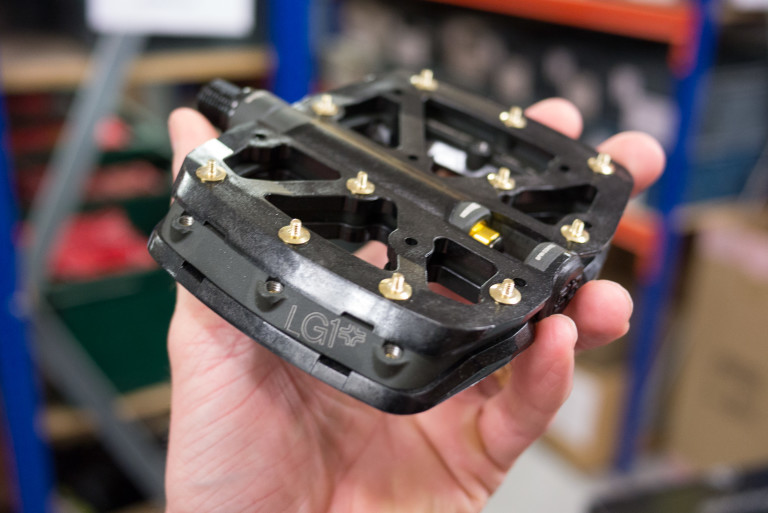 Other high-end pedals use plastic for sections of the platform. This can save weight and also absorb pedal strikes better.

AKA the things you can’t see.

Bearings will usually be cup-and-cone style (with open/’loose’ ball bearings) but some higher end pedals will have sealed cartridge bearings. Some thin pedals will use bushings instead of bearings – often just at the far end of the axle.

There is a trade-off of thinness of pedal and bearing durability. The thinner the pedal, the shorter the lifespan of the bearing. So it depends on your priorities really. If you want very thin pedals for the handling benefits and are prepared to service/replace bearings in them more frequently, then fair enough. If you want a pedal that you can fit and forget about for the longest time possible, don’t get super thin pedals.

Which flat pedals should you buy?

Leisure riders can worry less about ultimate performance and grip, instead they can focus on durability and reliability. Avoid the very cheapest pedals as they will have rough bearings that will only get worse pretty quickly.

Regular riders should go for a thinnish pedal with a large surface area and a cartridge bearing design. Replaceable/removable pins are a must. Spares availability is also worth factoring in (bearings, pins, axles etc).

Racers will either want very strong pedals (for Downhill) or super thin pedals (for Enduro). Maximum tune-ability will be welcome so pedals that have different length pins will be a good idea.