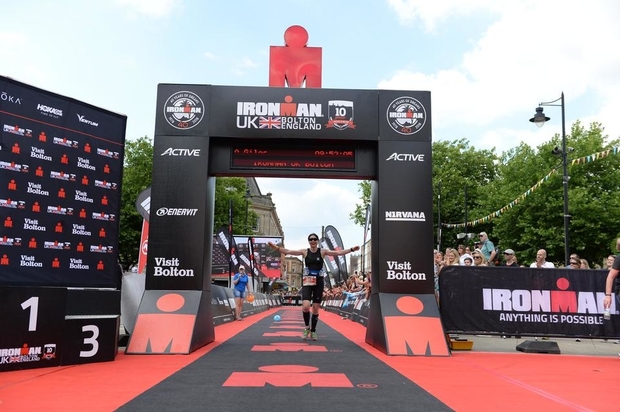 On the 15th July, the majority of people in the UK were gearing up to watch the World Cup final between France and Croatia from the comfort of their homes or the local pub.

But our very own Bex Rimmington had a different day ahead. Just before 6 am, she was standing at the edge of the lake in Pennington Flash alongside thousands of others, all of them in wetsuits and swimming caps. They were about to brave a gruelling 2.4 mile swim through the cold waters… and that was just the start.

Why? Because Bex was taking on one of the toughest triathlons in the world: the Ironman. Each year, it comes to Bolton, UK to challenge hardcore endurance athletes — and this year, we’re extremely proud to say that Bex finished the top of her group in her first-ever Ironman race!

Her favourite part of the Ironman? “On reflection, I enjoyed every single second of it. It’s something I’ve always wanted to do, and the atmosphere and support was just incredible!”

Looking ahead to the Ironman finals in Hawaii (where Bex will compete in October), we looked into the growing buzz around triathlons — and why they should be your next challenge.

The rise of the triathlon 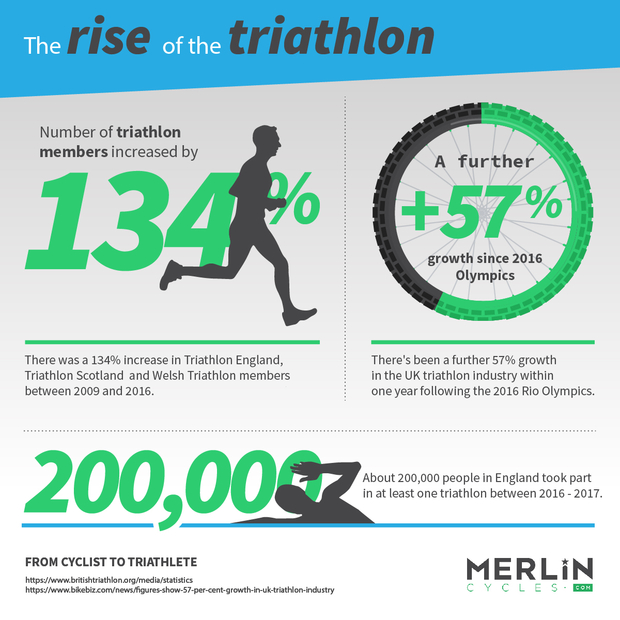 The popularity of triathlons in the UK is growing with impressive momentum. Between 2009 and 2016, there was a 134% growth in memberships with Triathlon England, Triathlon Scotland and Welsh Triathlon.

The Olympics in Brazil inspired even more people — there was a further 57% growth in the triathlon industry since Rio 2016.

“I think the triathlon is becoming popular because it is a challenge to conquer the three disciplines,” says Bex. “It also caters for everyone, from first-timers to elite athletes. Plus, you can complete the same event and course as the elite athletes, which is pretty unique to the sport.” 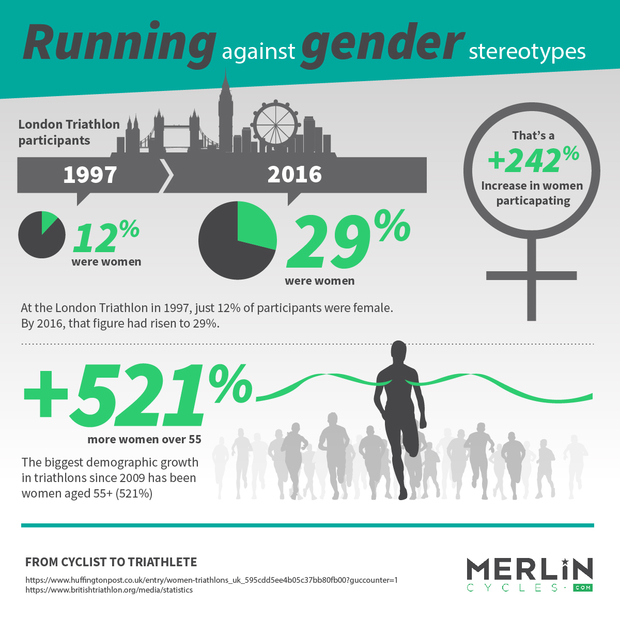 Bex joined hundreds of women in taking on the Ironman this year who together are making great steps forward for diversity in the sport — and it’s happening elsewhere, too.

Women around the country are proving that they can take on these significant physical challenges and excel, a trend that is doing wonders for making the sport accessible to more and more people. 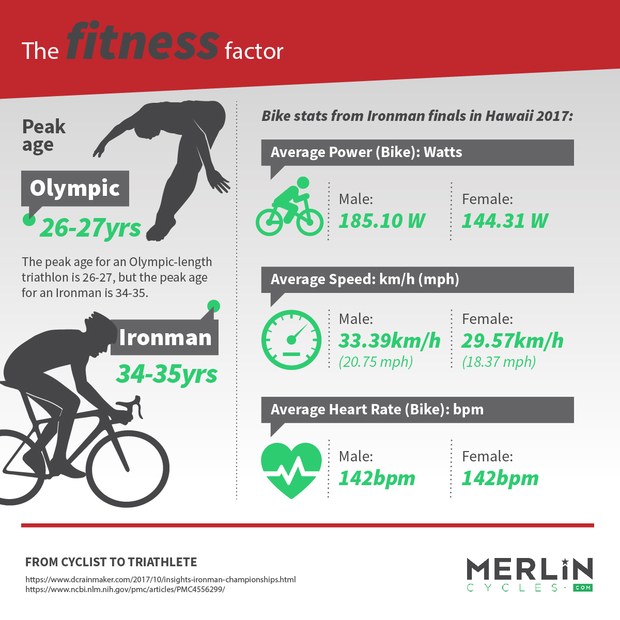 The peak age for Ironman competitors was between 34 and 35 years old. As elite athletes get more experienced, they tend to branch away from the Olympic-length triathlons that they dominated in their twenties and seek a greater endurance-based challenge. Comprised of a 2.4-mile swim, a 112-mile bike ride and then a marathon to finish it off, there are few races quite as challenging as the Ironman

Earlier this year, Bex beat thousands of others to be selected for the 2018 Specialized Zwift Academy Triathlon Team. The team is comprised of just four amateur athletes — with Bex representing Great Britain alongside athletes from Germany, Belgium and the USA — who will be supported by Zwift with the goal of competing for the age-group podium at the Ironman World Championships in Kona, Hawaii.

During last year’s final in Kona, the average bike speed was 33.39 km/h for men and 29.57 hm/h for women. Competitors sustained these speeds over 112 miles of hills and heat beneath the tropical Pacific sun — no mean feat! 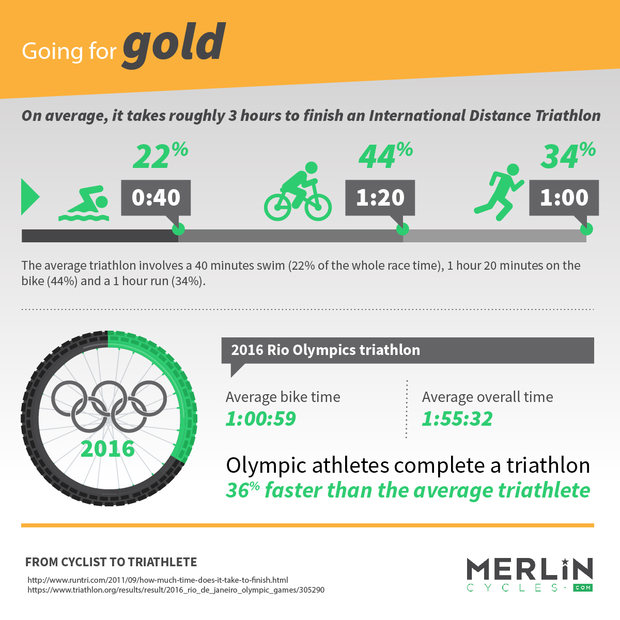 Ever wondered how Olympic triathletes compare to the average competitor?

Data from triathlons around the world shows that, on average, it takes about 3 hours to finish an international or “Olympic” distance triathlon. The stats from Rio 2016 show that the average overall time is just 1 hour 55 minutes — that’s 36% faster.

Expect another impressive showing at Tokyo 2020! 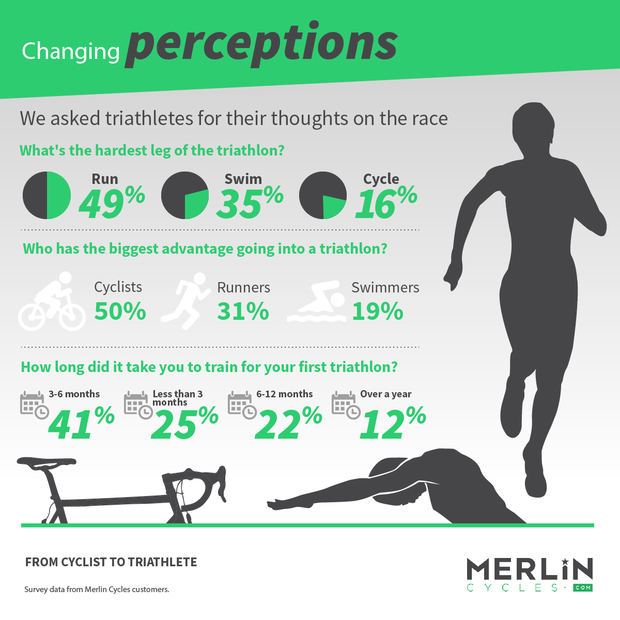 We wanted to find out from the people that had done it themselves what a triathlon was like to undertake, so we asked our customers for their input.

Nearly 50% of respondents said that the hardest leg of the triathlon was the run at the end. Bex had a similar experience during the Ironman: “The hardest part was the last part of the marathon, I had never run a marathon before so to complete it after the other disciplines was possibly the toughest bit.”

So who has the main advantage of runners, swimmers and cyclists? Well with the largest leg of the whole race, cyclists had the best chance of catching up for lost time on other disciplines — and our respondents agreed. “It’s interesting that people think that cyclists have the biggest advantage,” said Bex. “I guess it is because it makes up the longest leg of the race. Having said that, being able to run off the back of a strong bike is an art.”

Perhaps the most encouraging for newcomers to the sport is that over 40% of respondents said it took 3-6 months for them to train for their triathlon, so the time investment required might not be as high as some people might think.

Thinking of taking on a triathlon yourself? Bex has some advice for you.

“Just enjoy it! It’s a great sport and community to be a part of. There are triathlon clubs and individual discipline clubs that you can train with or ask advice from, and people are more than happy to help you in every step of the way. It’s great to be able to share your journey with others.”