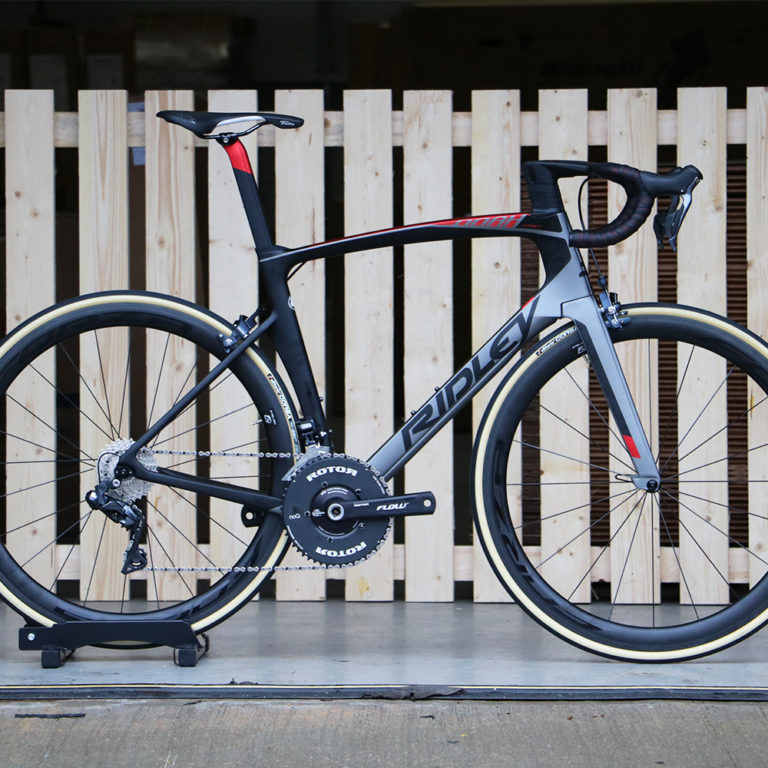 The Noah Fast is Ridley’s new top-level aero road model which has been designed and developed using their own state-of-the-art wind tunnel facility at Ridley HQ in Beringen, Belgium. 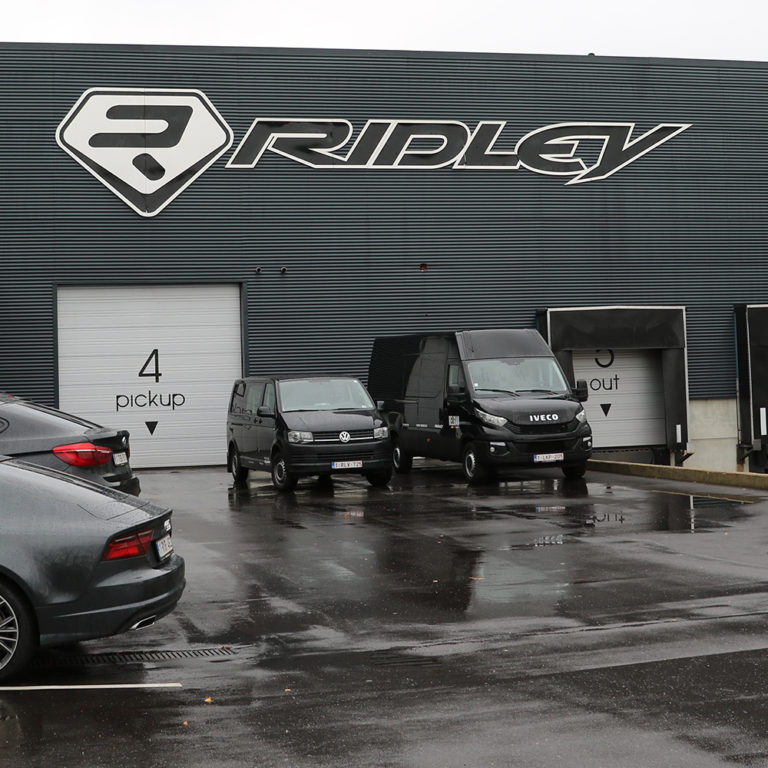 Recently we were lucky enough to spend a day with the Ridley designers and engineers at their factory, visiting their wind tunnel and discussing the development of the Noah Fast in great detail. 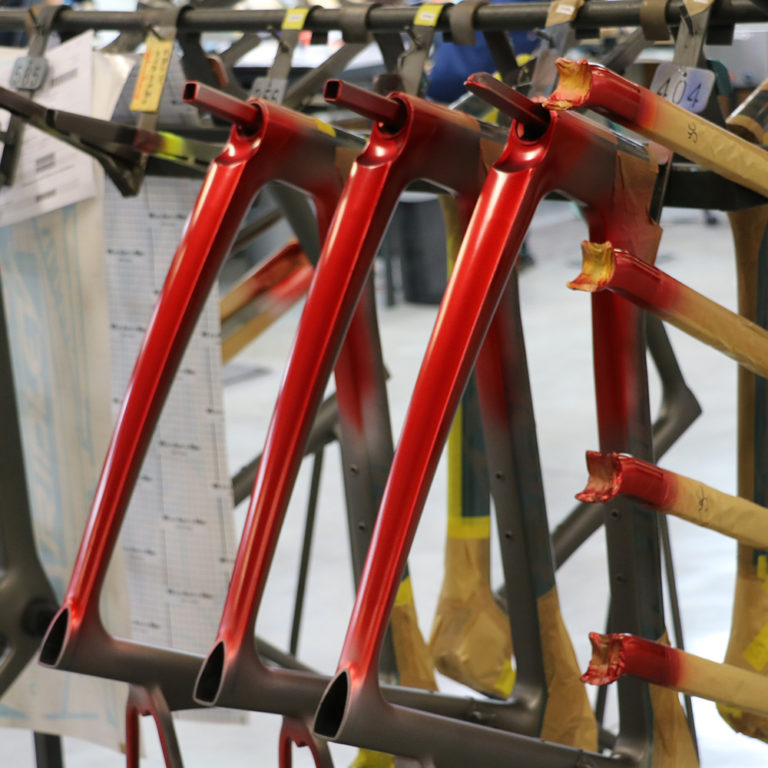 The new Fast model has evolved from their popular and proven Noah road bike which has featured in the pro cycling peloton over the past few seasons. Revealed for the first time to the cycling public last summer the new Noah Fast has already been raced at the Tour De France and has been ridden to sprint victories in the Tour of Britain by none other than German sprinting sensation André Greipel. 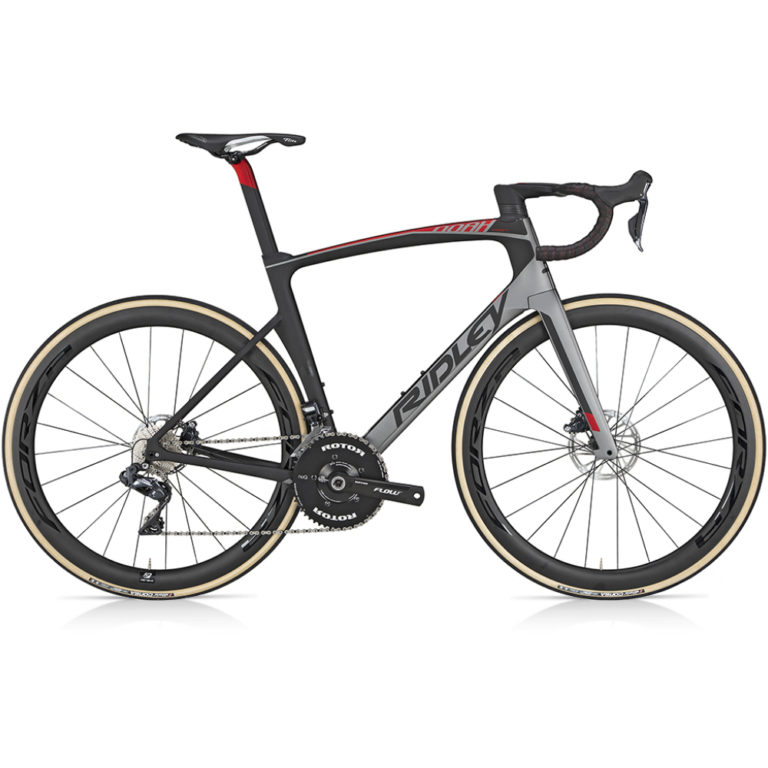 While the original Noah has informed the design of the new Noah Fast, Ridley’s engineers took a fresh approach for the development of the Fast with every feature of the bike being designed from scratch and tested in the wind tunnel. At the top of the engineer’s design brief was ‘integration’ with components and frame parts such as fork, handlebar, seat post and cable routing all considered as one aerodynamic element. This integration has been cleverly achieved without compromising position adjustability allowing riders to find their perfect position on the bike, accurate to 1mm. 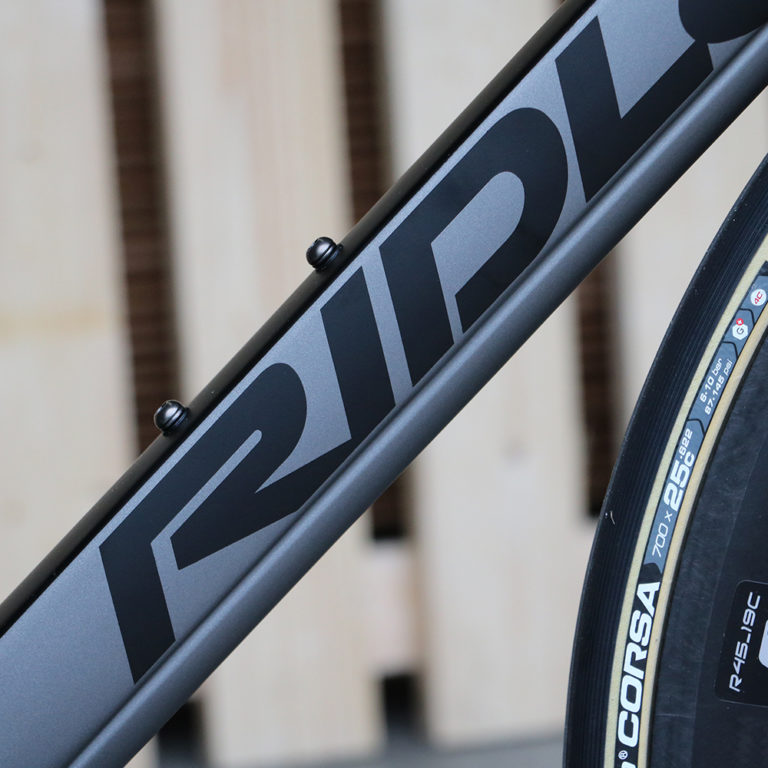 The Ridley Noah Fast is available as a disc brake or caliper bike with each frameset being designed and engineered to be as aero as possible. Featuring kammtail aero tube profiles, which have quickly become an industry standard, the Noah Fast also includes a small notch detail running down the down tube which encourages the airflow to follow the surface of the bike more closely making it even more aerodynamically efficient. 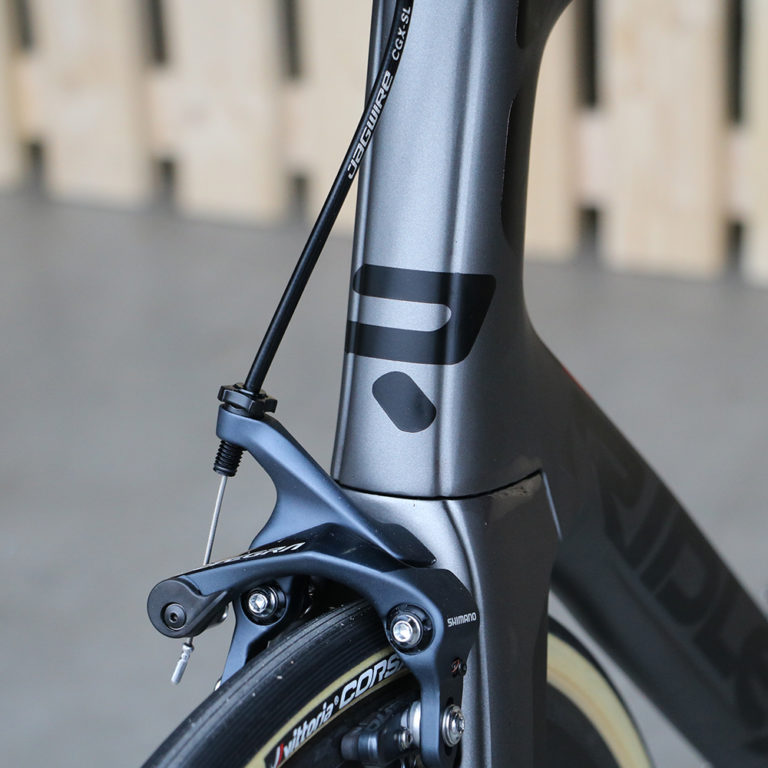 Named ‘F-Surface Plus’ these notches also appear on the seatpost and leading edge of the fork continuing seamlessly onto the front of the head tube to produce the same aerodynamic benefits. During our visit to the wind tunnel the Ridley engineers were quick to point out that these aerodynamic considerations have been developed within a range of wind yaw angles, not just head-on, making the Noah Fast truly efficient in real-world conditions. Both disc and caliper brake options are lighter than their predecessors with further adaptations to the fork, seat post and handlebar the bike’s total weight is about 250 grams lighter than the previous Noah with the rim brake version staying below 7 kg on the scale. The stiffness of the bottom bracket & head tube is further increased to its predecessor so that all the power you put through the pedals is transferred directly into forward motion. 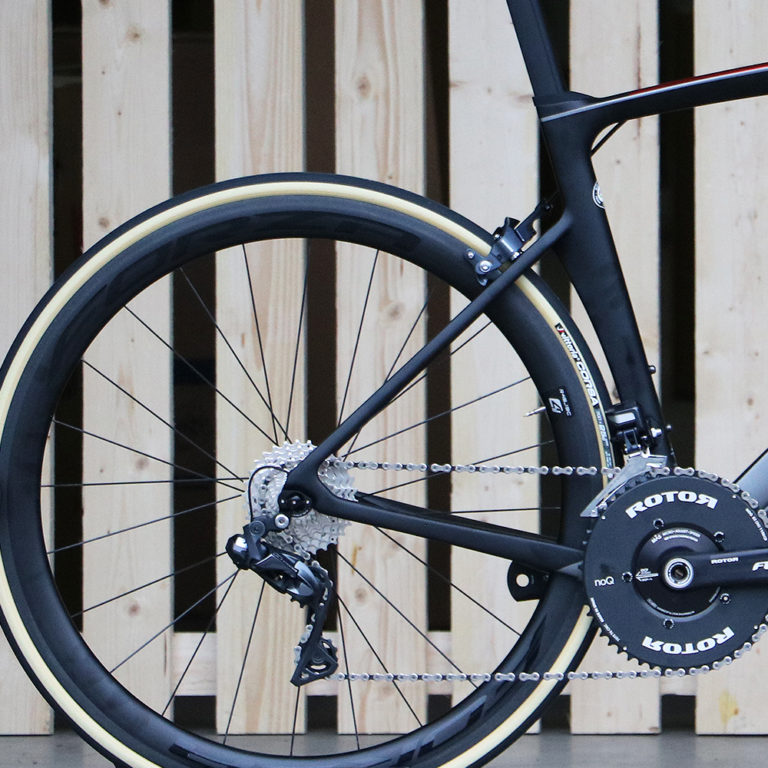 The seatstays on the Noah Fast follow the same trend as most modern aero road bikes – a low position joining the seatpost lower down the seat tube – which has been proven to be the most aerodynamically efficient design in testing; the seatstays marry up with chainstays which feature a slightly flattened profile to produce a small amount of vertical compliance and help enhance comfort encouraging all-day riding. 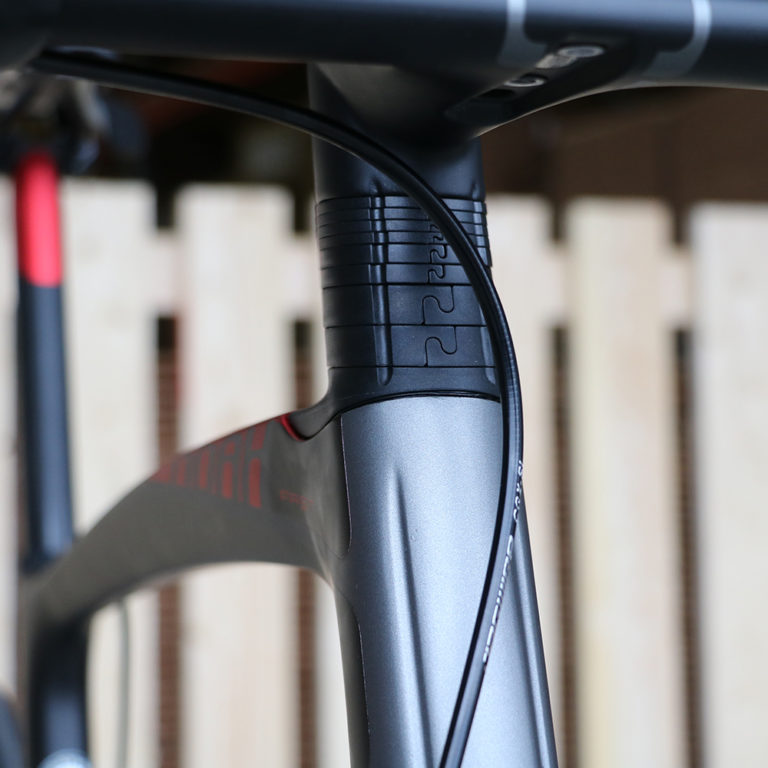 The Noah Fast aerodynamic cockpit is a real showcase of Ridley’s ‘fully-integrated’ philosophy. Ridley’s new F-Steerer, with internal half-moon curvature, facilitates full internal cable routing; the cables run straight from the integrated handlebar, through the stem and directly inside the steerer tube where they have room to move freely making this an efficient system that’s also aesthetically pleasing giving your bike a very clean look. The F-Steerer system is compatible with Shimano, Campagnolo and SRAM mechanical and electronic groupsets. The Fast comes with plenty of steerer tube height and a mix of different spacers allowing you to fine tune your bike fit to the nearest 1mm. Every aerodynamic factor has been considered with even the spacers including Ridley’s F-Surface Plus notches so that they continue up seamlessly from the fork and headtube. 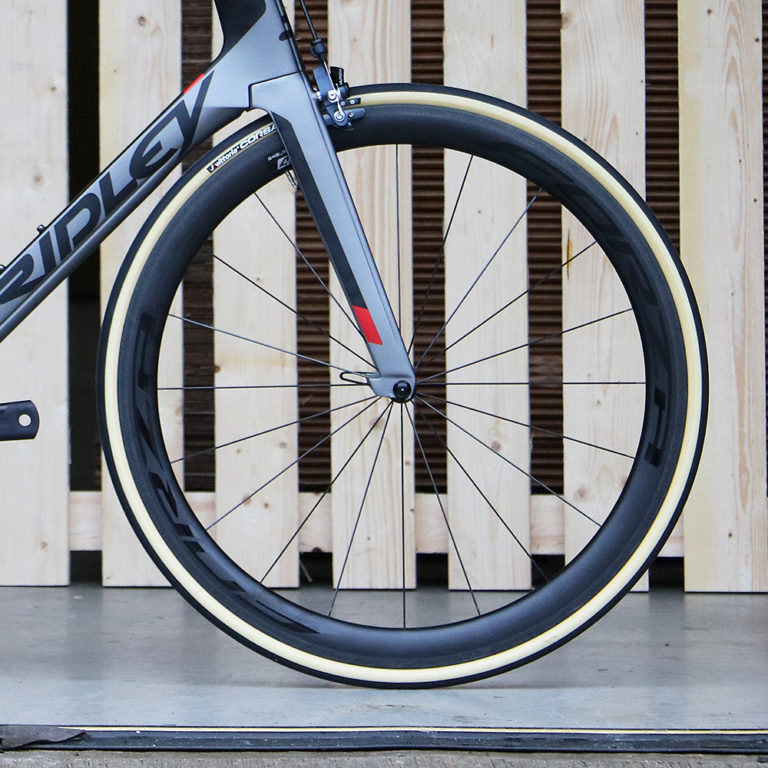 Ridley have included their own Forza R45 deep section carbon wheels on both the disc and caliper brake option of the Noah Fast. These stiff, lightweight, aerodynamic wheels feature a 19mm internal rim width for tyres from 23mm to 28mm wide. The Fast comes specced with stylish 25mm Vittoria Corsa tan-wall tyres; the wide profile of the Forza R45 rims means that the tyre profile is closer to a 28mm, allowing you to run a lower tyre pressure and gain more control thanks to a larger contact area with the road surface. 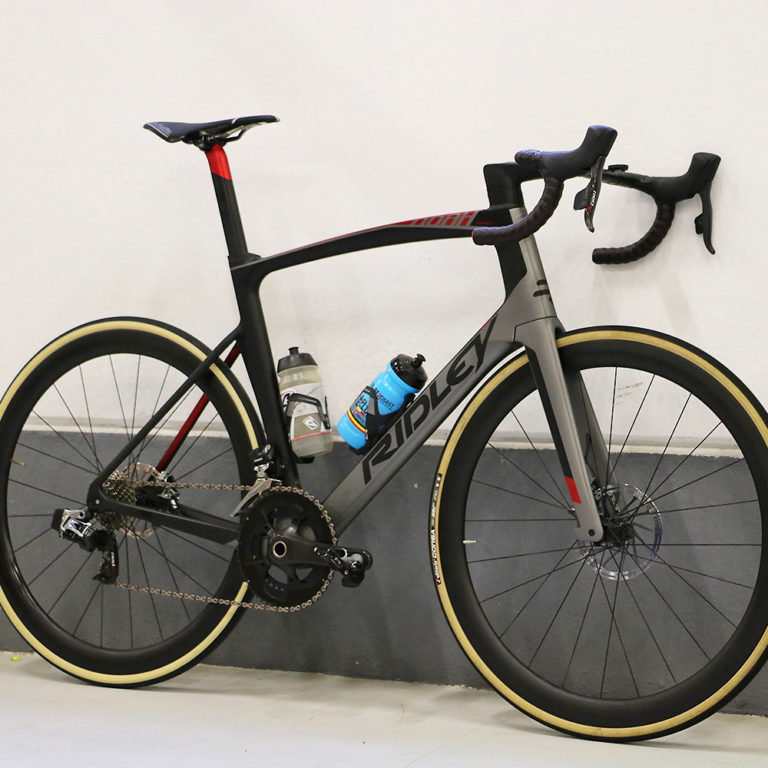 The Noah Fast aero road bike reflects Ridley’s considerable investment in the development of their own wind tunnel facilities and the ongoing working relationship with the Lotto Soudal pro cycling team. During our visit to Ridley HQ the designers and engineers were keen to highlight the partnership they have with the team, reinforcing the importance of testing in ‘real world’ conditions in the most demanding road races on the planet. 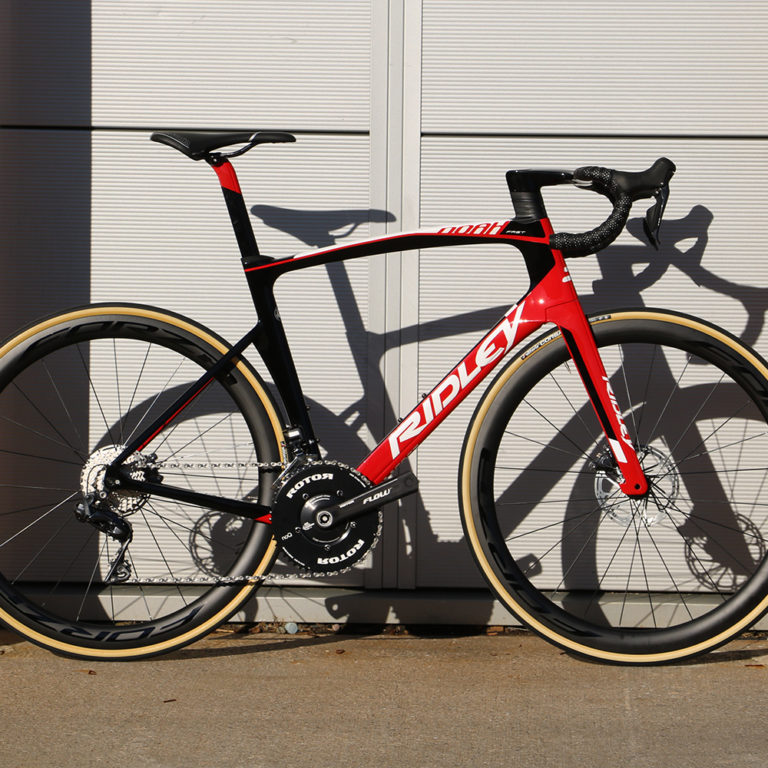 Whether you’re looking to make the leap to a disc-brake equipped aero road bike or are more of a traditionalist and gravitate towards the caliper brake model the Ridley Noah Fast is a serious option that’s backed up by years of design and innovation in the wind tunnel and countless hours on the grim, rain-soaked cobbled roads of Belgium.

FIND OUT MORE ABOUT RIDLEY NOAH FAST SPECIFICATIONS AND PRICES….