Downhill bikes are full suspension designs with as much travel as possible. We’re talking 180mm or more of suspension. 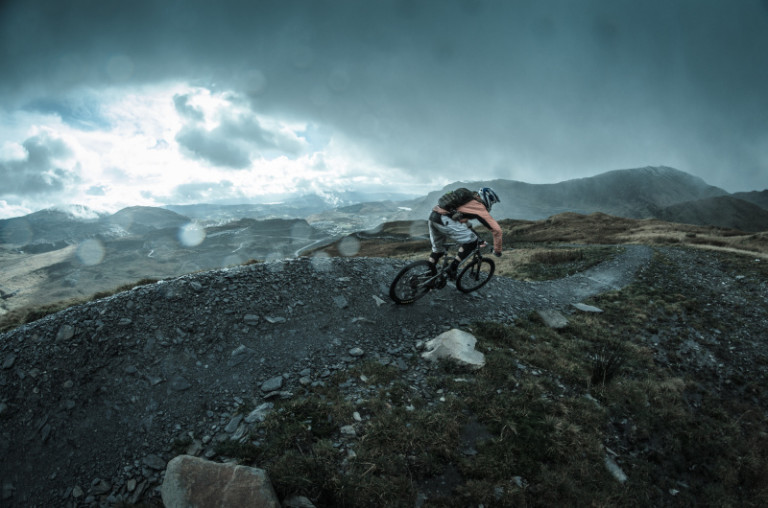 Downhill bikes also need to be stronger and stiffer than that so they can survive being pushed beyond those intentions. When Downhillers are off-line or all-out crashing the bike needs to be able to deal with it.

As much as possible please! 180mm-200mm is the common amount. Air sprung units can be found but they are the exception rather than the rule. Coil sprung units are the preferred choice. As well as being cheaper they’re more reliable and offer a performance feel that air springs find hard to match for Downhill. The extra weight of coil springs isn’t quite as important in Downhill.

Suspension designs will vary greatly from manufacturer to manufacturer. Each brand has their own bespoke design and each design will work a bit differently. Some will bias bump absorption, some will focus on durability, others will prioritise rider responsiveness. The differences won’t be huge but Downhillers are concerned finding the perfect bike for their particular desires.

The suspension on more expensive Downhill bikes will offer a high degree of adjustability too (damping feel, amount of travel), so that riders can tweak the bike’s handling for different sorts of tracks and conditions.

There’s currently not very many carbon Downhill bikes out there. Saving weight isn’t as much of a priority for Downhillers as it is with other mountain bikers. And there’s still some concern about how carbon deals with crashes and impacts – both of which are part and parcel of every Downhiller’s life.
Carbon bikes are pretty much the preserve of professional racers who value every gram of weight saved. They also change bikes every year too so are less concerned with durability!

Small wheels rule the roost. We’re beginning to see some 27.5in wheel Downhill bikes appearing but as of right now 26in is where it’s at.

One factor absent from the design of all Downhill bikes is climbing. It is simply irrelevant. Downhill bikes have seat angles and seat tube heights that make seated riding for any amount of time highly inefficient if not impossible. This doesn’t mean that pedalling is ignored too. Far from it in fact. Downhillers want speed and they appreciate that pedalling – as well as gravity – is required to achieve it.

Downhill bikes are extremely slack, extremely low and extremely long. They don’t really make sense in the car park but point them down a steep track and they’ll get down pretty much anything.

The finishing kit will be stiff and super strong. The brakes will be incredibly powerful. The gearing will be single-ring specific and often with a compact (road bike style) cassette on the rear offering not much in the way of easy-pedalling gears. The tyres will be big, chunky and made of sticky compound rubber for amazing grip.

Bikes get lighter as the price tag increases and although this is never a bad thing, it’s not something that’s of utmost importance to Downhill riders.

One comment to “Buyers guide to downhill mountain bikes”