If you’re a fan of vintage bikes and lifestyle then L’Eroica Britannia in Bakewell, Derbyshire from 20-22 June is the place to be.

It is the British version of the iconic Italian Eroica event which takes place on the gravel roads of Italy each year and just like its Italian counterpart, it’s not just about the rides on Sunday.

The event is a three day festival of all things vintage bicycle related so expect plenty of multi-period clothing, haircuts and themed stalls. It’s also a celebration of local food and drink so there’ll be a wide variety of refreshments available.

The actual rides take place on Sunday morning with a choice of three routes 30miles, 55miles and 100 miles so it’s up to you how far you want to push yourself and your vintage machine. Entrants must abide by strict rules on which bikes they can ride and each bike is vetted before being allowed to start. 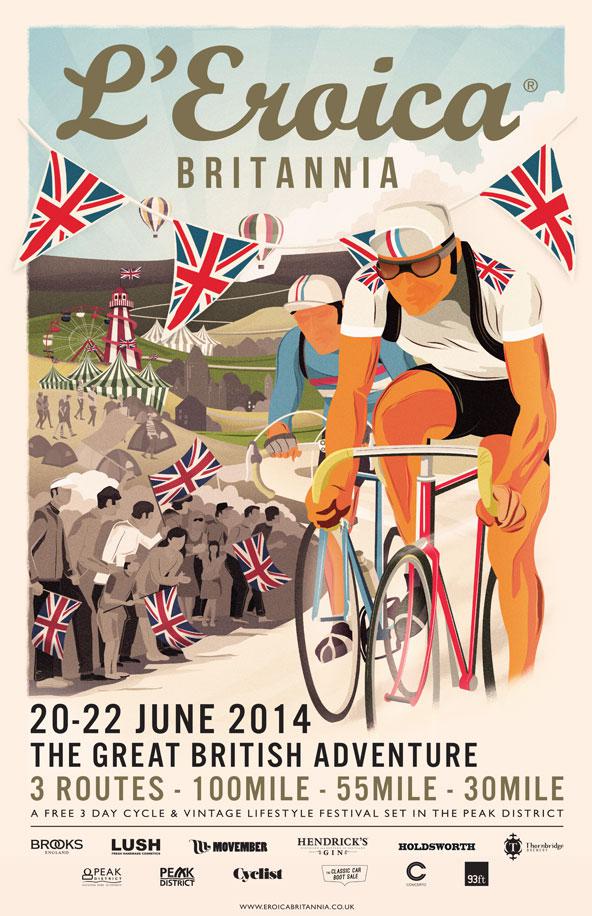 All bikes must have the following characteristics to take part:

But like all things in cycling there are exceptions so new steel frames with vintage characteristics and built with components meeting the above criteria are allowed. For the 30 mile route other types of bikes such as postman’s bikes, general working bikes or leisure bikes will be allowed as long as they have the vintage characteristics described above. Mountain bikes are unfortunately not allowed. The organisers are very strict on the rules and anybody who arrives at the start with a bike that does not conform to the rules above will not be allowed to enter or if found on the course, disqualified immediately.

Clothing is left up to the individual but everyone taking part really embraces the ethos of the event and dresses in clothing suitable to the period of their machines. Expect to see lots of wool jerseys, hairnet crash helmets, tubs round the shoulders and goggles. 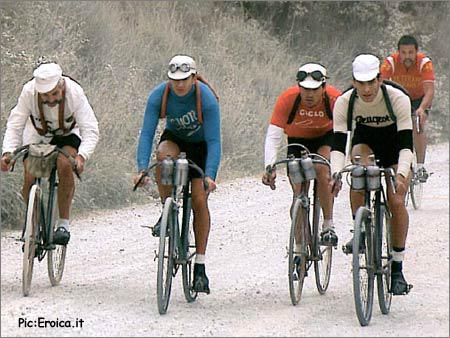 Since I’ve yet to get to Italy for the main event, L’Eroica Britannia is a great way for me to get into the vintage spirit and enjoy a few days out and a leisurely ride on a classic bike. No doubt there will be many stunning machines there from all ages so that leaves one question; which bike to ride?

Growing up in Ireland in the 1980’s every cyclist who was anyone had a Vitus 979 as that was the bike Sean Kelly rode. These alloy bikes were so futuristic, not to mention lighter, compared to the steel frames of the time and were distinguishable by their lugged and glued construction. I couldn’t afford one at the time but like lots of middle-aged cyclists, I have since got the frame I always wanted but could never afford as a kid as a project to restore. 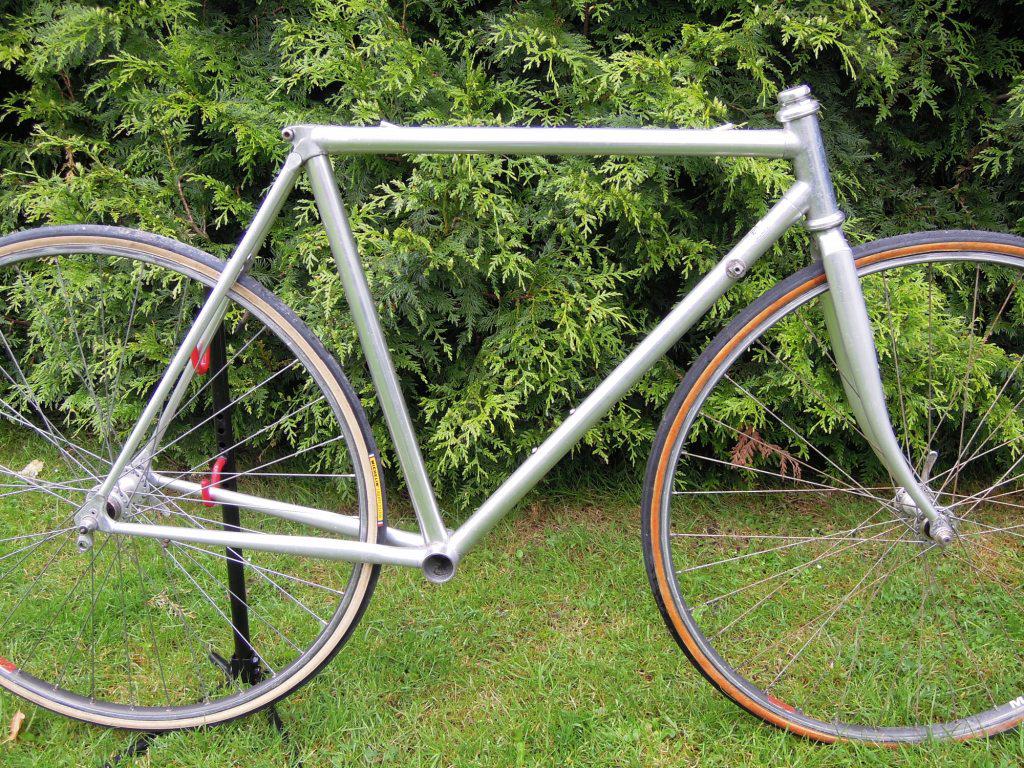 I bought the frame only with a view to building it as a replica of the KAS team bike Sean Kelly had in 1986 (I already have the modern replica kit) which will allow me to just scrape into L’Eroica Britannia with it. The only problem is that it is silver and I don’t think Kelly ever rode a silver 979 throughout his career. Black, light blue and gold were his preferred colours but never silver, but silver was the only colour frame I could get my hands on in my size at the time.

Stickering it up isn’t a problem as the popular online auction site has a few people selling the complete KAS sticker kits. What may be a problem is the Mavic groupset. The Mavic stuff is rare as and very, very expensive (we’re talking modern Dura Ace prices) but I have an early Shimano 600 groupset so may have to substitute a few parts but at least I’ll have a bike with correct period equipment. 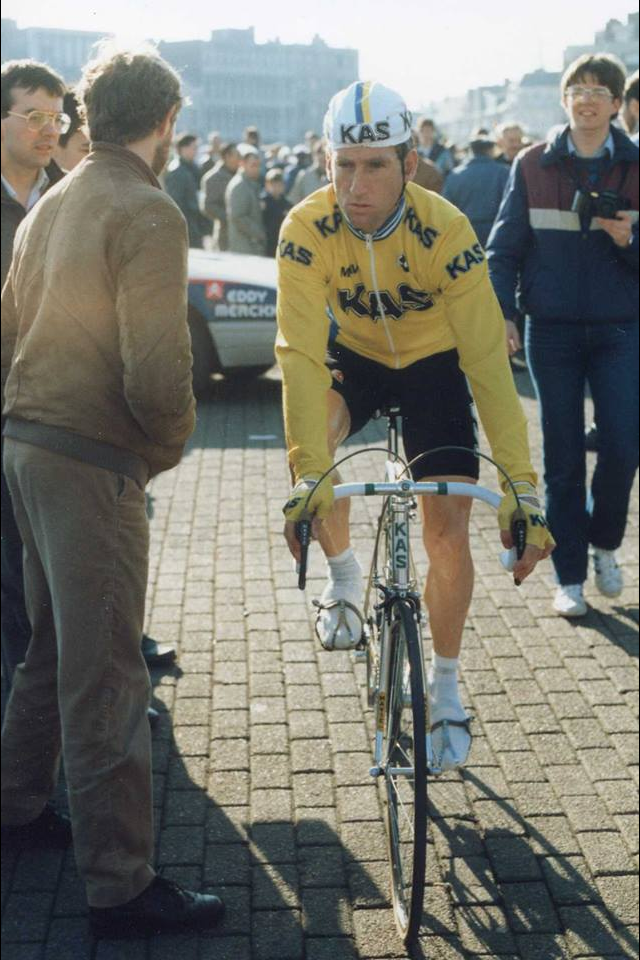 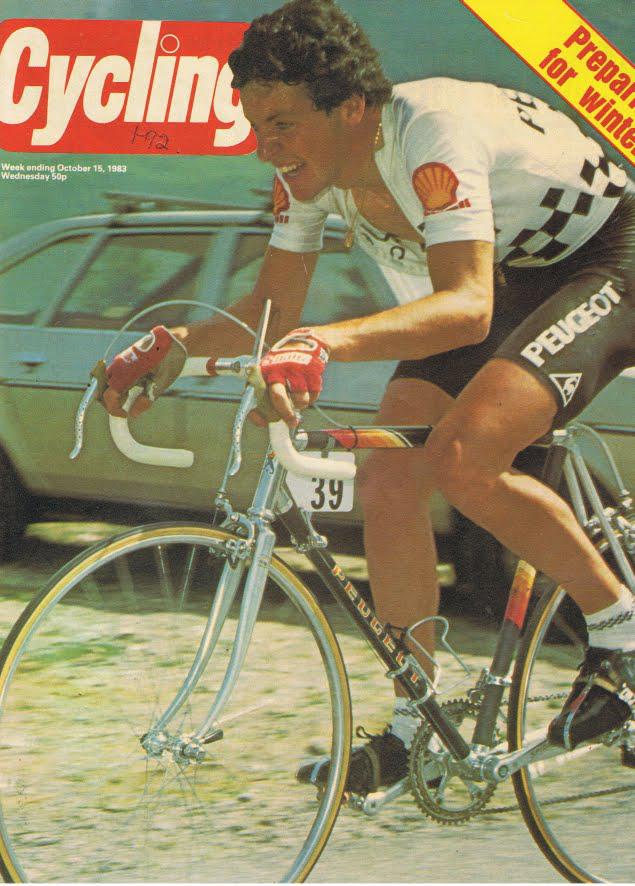 The other option would be to sticker up the bike as a Peugeot as that is what Stephen Roche used in the early 80’s and period Campag is much easier to get hold off, just need the classic chequered flag Peugeot jersey then. 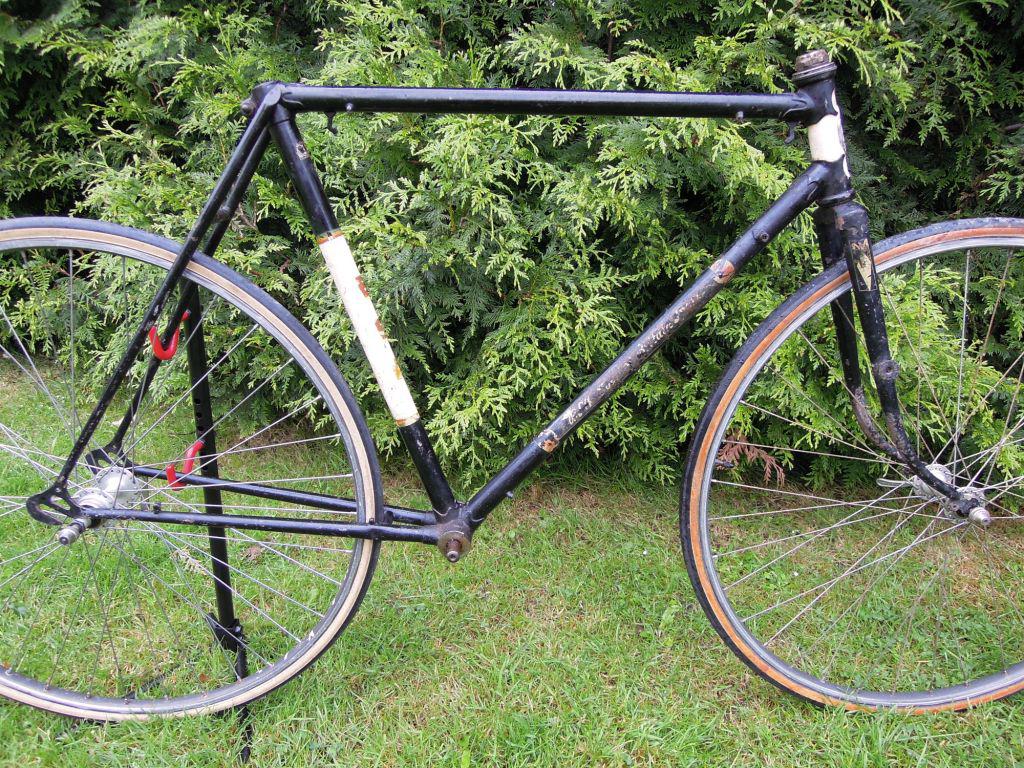 My other bike option is to build a 1940’s BSA frameset I recently picked up at a bike jumble with an eye on restoring and repainting for future Eroicas. This was meant to be a long term project but with excitement building towards this year’s event it may become a quicker than thought project with the repaint having to wait. This could lead into a whole new clothing dilemma which thankfully I have managed to head off jersey-wise at least.

I entered the L’Eroica Britannia through CTC, the national cycling charity, www.ctc.org.uk) who had a special offer for members wanting to ride. The event is £70 to enter direct but CTC are doing a strictly limited offer of 20 places with a CTC woollen jersey, made especially for the event by one of the best in the business Woolistic worth £110, for £149.99 with the proceeds going towards their campaigning work. I’ll also get post ride refreshments from their stand at the event so will be nice to have somewhere to sit down after. The jersey is a replica of their heritage one so at least it will go with any older style bike I end up riding, another crisis avoided!

Having listened to many friends who have been to Eroica in Italy, I really hope the town gets behind the event over the weekend as much as the Italians do, or at least the stalls selling vintage stuff are as good as the ones in Italy. Whether or not I’ll need to buy anything to finish my bikes remains to be seen – I’ll keep you posted.