With a revised Giulia and radically overhauled Dura, the 2016 range of Sensa looks more impressive than ever. 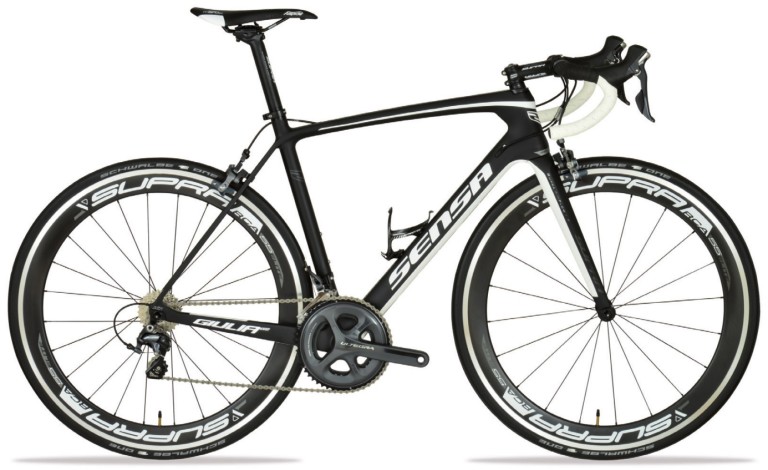 After a few year’s of remaining untweaked, Sensa have decided the Giulia was worth tinkering with a bit.

The Giulia is Sensa’s do-it-all road bike. Built for the sort of riding that we all do. The riding without a niche or a marketing buzz word. The Giulia is just for… riding.

In many ways Sensa have taken the best bits from recent technological advances and introduced them sympathetically to the Giulia. It’s more aerodynamic. It’s more comfortable. It can accept wider tyres. It’s even lost a little bit of weight. Win win win win.

For 2016 the Giulia is available in Matt Black/White or Shiny Black/Yellow. 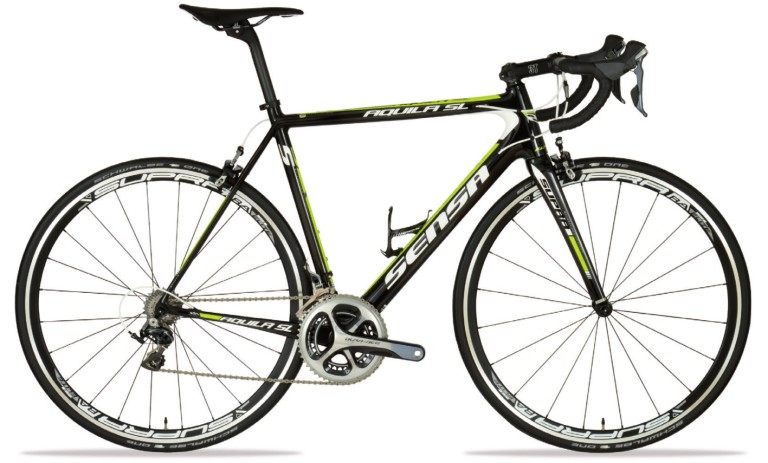 It’s hard not to use the S-word here. The Aquila SL is Sensa’s sportive focussed carbon bike. Built for comfort and high mileage.

Introduced last year to positive reviews and excellent customer feedback, the Aquila SL remained pretty much untouched for 2016. Phew. The new Salita SL fork up front is new however. It’s a little bit more sleekly aero but the weight and ride feel remain.

The main frame is made from Sensa’s most recent formula of carbon fibre (Generation 6). This is extremely light, strong and has excellent damping properties. It does add a bit to the price tag but it’s well worth it. 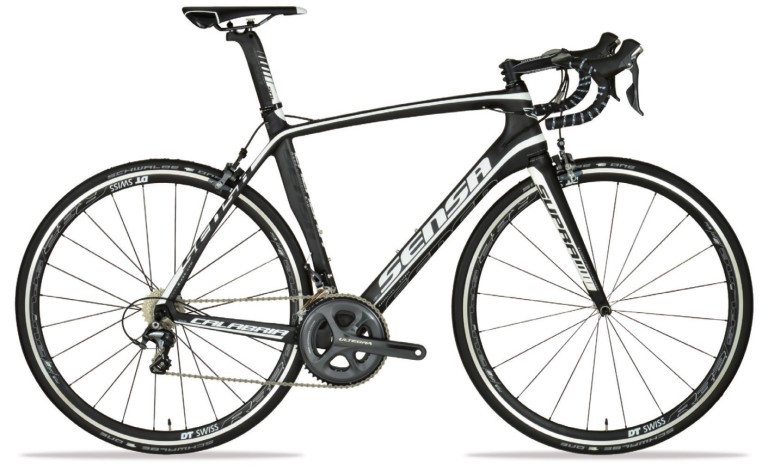 Described by Sensa as “The Aero Bike”, the Calabria could just as easily be called “The Race Bike”. It’s the one bike in the range that is unashamedly aimed at achieving speed. It’s the weapon of choice for the Sensa-Kanjers voor Kanjers Cyclingteam.

It is stiff, efficient, responsive and aerodynamic.

For the 2016 the Shiny Black/Orange colourway remains but is also joined by a Matt Black/White option. 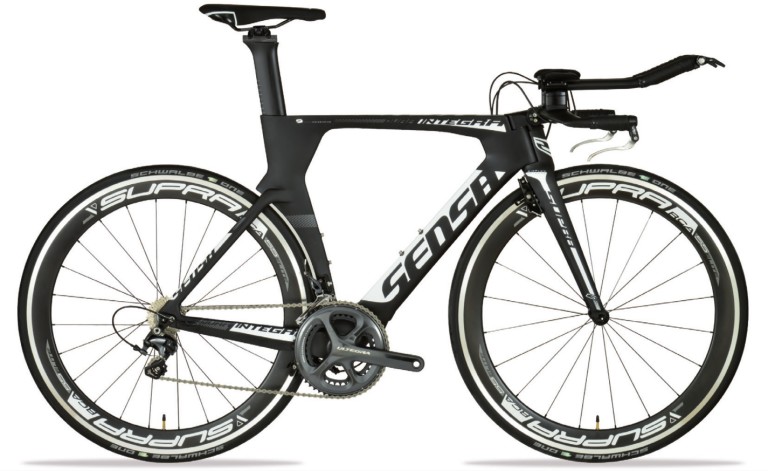 It doesn’t take much of a glance to realise that this is Sensa’s time trial and triathlon bike. The Dura is the model that has changed the most compared to last year’s version.

As its name suggests, the Dura Integra now features integrated brakes. These are tucked-away brakes that sit behind the fork crown and underneath the chain stays behind the bottom bracket.

The whole frame and fork have been redesigned. It looks a lot more blade-like. The head tube has been radically changed. It’s super short now. It now also features an integrated adjustable stem. The seatpost has been redesigned too. The geometry has also had a makeover.

The overhaul has added a smidge of weight to the bike (100g) but its aerodynamics have been significantly improved and so too has the ride and handling.

Sensa don’t make enough of a song and dance about the new Dura but we reckon it’s a damn fine TT/Tri machine. 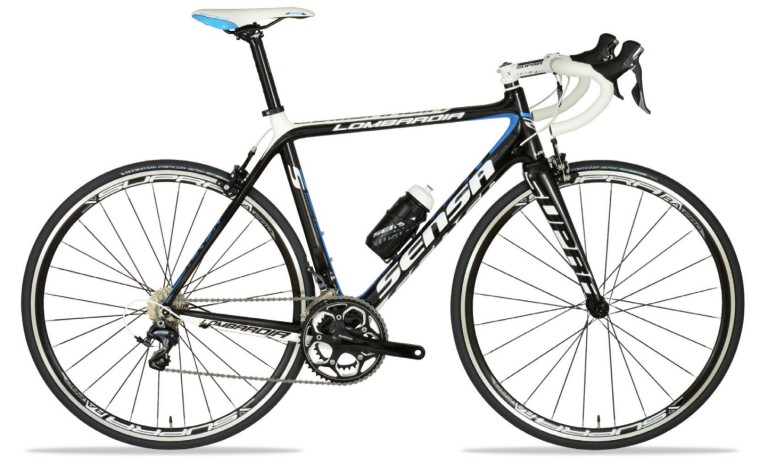 The Lombardia is Sensa’s mid-range carbon bike. It’s uses Generation 4 of Sensa’s carbon mix which isn’t quite as light or vibration dampening as Generation 5 and Generation 6.

The geometry and general handling is the same as the Giulia. It’s a classic all-rounder bike. It’s only available in Shimano Ultegra and Ultegra/105 mix drivetrains. 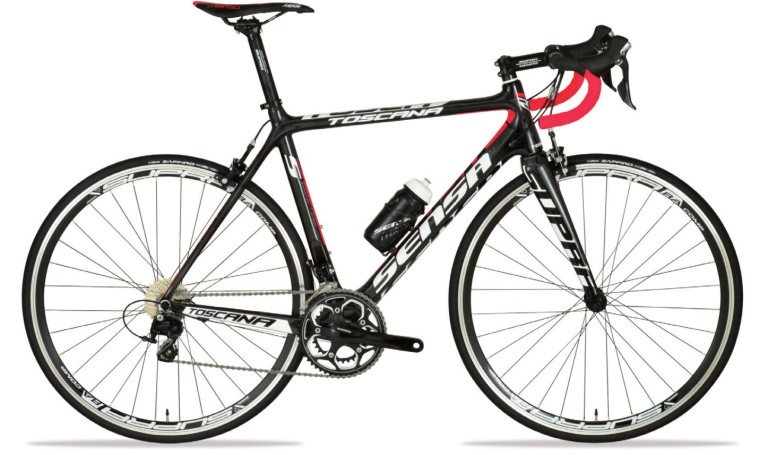 Not a lot of people expect this but… the Toscana is the same frame and fork as the Lombardia.

The difference is entirely the finishing kit and drivetrain options. Which are Supra Comp stuff and Shimano 105 and 105-mix respectively. It’s only available in Shiny Black/red. 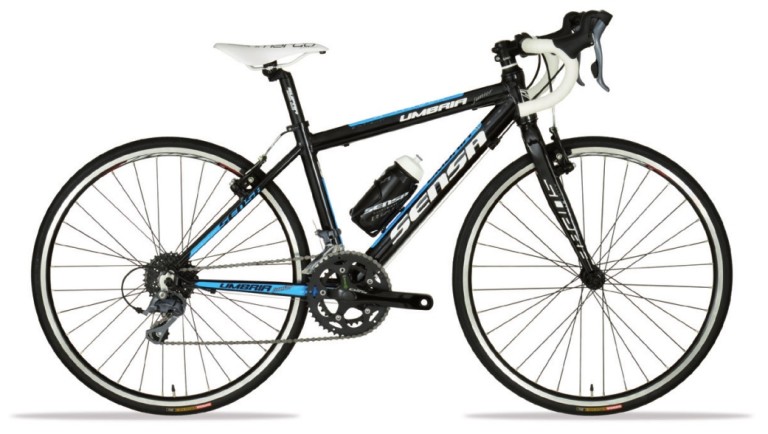 At last, a proper drop bar bike for younger riders.

The Umbra Junior has 26″ wheels, a 2×8 Shimano Claris drivetrain and uses mini V-brakes (rather than road calipers). The use of V-brakes is so that the bike can be run as a cyclocross bike too should you so wish. Sensa even include a pair of 26″ Schwalbe CX Pro 35mm tyres in the box. 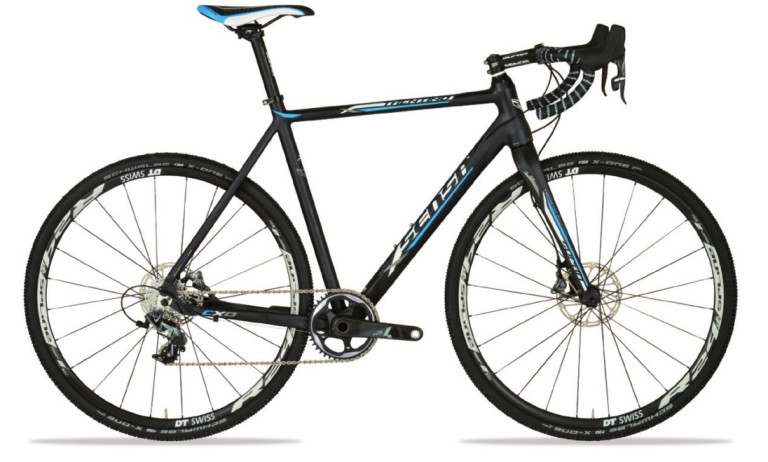 Yes okay, it’s not a road bike. But it has drop bars on it so we thought we’d bung it in with this roadie round-up. The Trentino CXD is a brand new model for 2016. It’s Sensa’s first ever disc brake equipped cyclocross bike.

As its name suggests, the bike is inspired by Sensa’s regular high-end aluminium Trentino road bike. The frame is Superlite Y-9 Alloy Triple Butted tubing like the Trentino but with totally different geometry and tubing that’s been optimised for the demands of cyclocross.

Available in single-ring Sram Force drivetrain or double-chainring Shimano Ultegra set-up. We can’t wait to sling our leg over one of these. They look the buisness!

They’re still doing the aluminium Trentino, Romagna and Umbria models. The ladies Emilia range has also been updated for spec and colour options. Check out the Sensa road bikes section on Merlin Cycles.

We’ll be covering Sensa’s 2016 mountain bikes in a separate blog very soon, so keep an eye out for that if you like your knobbles.

Do you know the way to Almelo?

Sensa are based in Holland. In Almelo in eastern Holland to be precise. If you’re an avid bike racing junkie then you may have heard of this town before. The Profonde van Almelo is a UCI category 2.1 elite men’s and women’s professional road bicycle racing event held annually in the town. 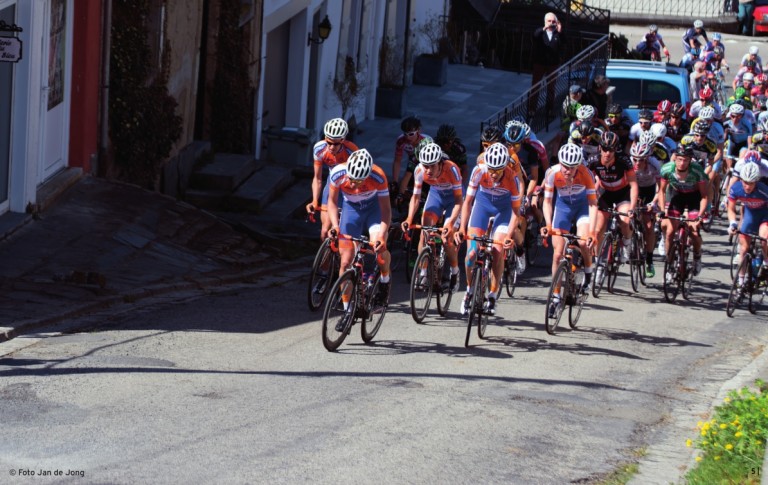 Sensa have been producing bikes for 25 years now. There current slogan is “We make sportive bikes for active people, to enjoy cycling!” Which is as good a summary as you’ll find. Although it does overlook somewhat their racier bikes such as the aero Calabria and certain guises of their iconic Giulia.

By cyclists, for cyclists

They’re a relatively modest sized company, staffed almost entirely by enthusiastic cyclists. They ride a lot. And they don’t just rag it around the the Netherlands. They’re always bobbing off to the Alps, the Pyrenees and the Ardennes.

Sensa bikes are for riders. New riders, old riders, fast riders, steady riders. Anyone who gets their kicks from cycling is well served by a Sensa. Sensa bikes are easy to live with and reliable. They don’t really do one season wonders that have to be binned after hard season or two. Sensa are designed to be with you for a decent amount of time.

It’s starts with a frame but doesn’t end there

Sensa don’t chase to have the absolute stiffest or the absolute lightest frame. Their bikes are plenty stiff and light enough thanks but they have a healthy and realistic view that – although important – the frame is not the be all and end all of a bike. They put just as much emphasis and concentration on the most appropriate finishing kit as possible.

Speaking of which, Supra is Sensa’s in-house component brand. By having their own brand stuff it makes it possible to achieve a cohesiveness and performance that is very rare without much higher price tags. This is especially noticeable on models with Supra wheelsets.

They don’t really do cheap’n’ nasty bikes. All of their bikes meet a performance spec that, as cyclists themselves, Sensa are proud to bear their name. 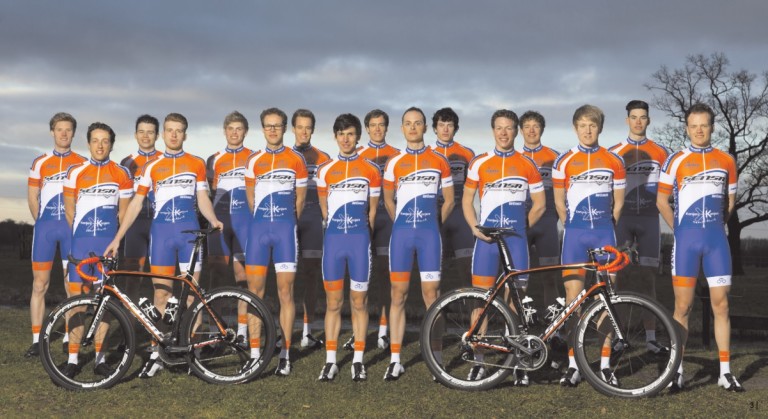 Sensa bikes at the races

They do support a number of race teams. The main Sensa team is Sensa-Kanjers voor Kanjers Cyclingteam. You can find them on Facebook here or – if you can speak Dutch – their official site is www.sensa-kvkct.nl