Avoid the dramas by following these five golden rules.

Horse riders and cyclists have a lot in common. They are both vulnerable road users. They both could do with more off-road rights of way access.

There is a potential issue between them. Horses can be easily spooked. Cyclists often don’t realise how stealthy they are. Cyclists passing horses can be a hotspot for unintentional drama. 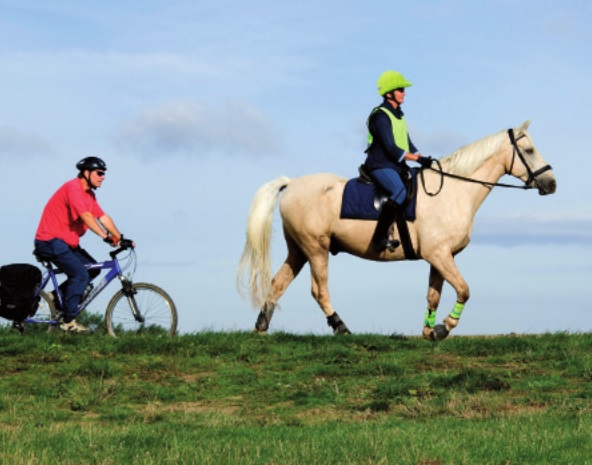 Help avoid such drama by following these hints and tips.

Cyclists are stealthy relative to their speed. There’s no audible clues or warnings that we’re approaching. Having a bell is one answer but for whatever reason a lot of us cyclists don’t like them. Quite probably because we’re frequently told to have them!

The truth is that horses (and walkers) don’t actually like the sudden DING! DING! of a bell anyway. So what’s the answer? It’s simple. Just call out ” hello”. A louder “hello” spoken from a distance is better than a quiet “hello” at the last second.

Prior warning is everything. It will also typically result in you being able to pass quicker, without having to come to a standstill.

Stop if the horse is spooked

If the horse is frightened then it’s best just to stop until it’s calm. Treat it like a traffic light on red. A minor pause.

Don’t get annoyed if a horse rider doesn’t seem to acknowledge your consideration, they may just be concentrating on controlling and calming their horse until you have passed by.

Pass on the right

Horses are used to traffic passing them on the right. As with other traffic, it’s usually best to pass as you would anything else. Don’t cut inside.

Don’t forget to say thanks – even if you think that it’s you that needs the thanks. It’s a mutual thing. It always useful to say thank you. It builds up your positive karma!

Next time it may be you who needs consideration in a difficult situation and what goes round comes round.

If you organising a bike race or event please notify the horse riding schools and livery yards in the vicinity. Visit bhs.org.uk for list of such places.