The two unique things about Strava are its social interaction and segments. Strava is a website and Smartphone app that records your rides via your phone or GPS computer. It keeps a log of all the rides that you record on to it and all the attendant stats.

It means ‘strive’ in Swedish

Strava was started in 2008 by Michael Horvath, as a tool for some friendly competition for amateurs who kept their own hours.

Strava is a website and Smartphone app that records your rides via your phone or GPS computer. It keeps a log of all the rides that you record on to it and all the attendant stats. You can upload heart rate and power output info too (if you have heart rate and power meter devices that is). In this regard it’s like 100’s of other GPS logging sites and apps out there.

The two unique things about Strava are its social interaction and segments.

The social media aspect to it is the usual sort of thing. You can friend (follow) other people, you can comment on people’s rides, you can give them kudos (which is similar to ‘Like’ on Facebook). There’s loads of people on Strava, many many more so than on any of its rivals so the social aspect of it is unrivalled in its field really. You can also setup or join Clubs.

Any Strava user can create their own segments. You can make a segment private (so only you can ‘see’ it on Strava) but the exciting thing is sharing your segments with the rest of the Strava community.

When you’re out riding (and recording your ride with Strava) you may already know the location of some segments, you may not.

If you do know you’re on a segment, chances are you’ll not be able to resist the temptation to try your hardest for the duration of the segment. It’s hard not to even for the most casual of cyclists. It’s this that is the appeal and addiction of Strava. 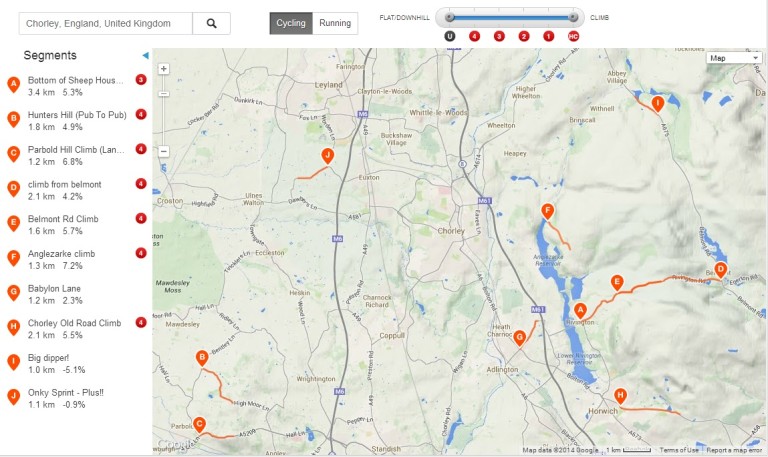 You can search Strava for existing segments in a chosen area (eg. town name) or your current location if you’re using the phone app.

When you come to upload/save your ride to Strava you can then see how you fared on all the segments that you encountered. You will possibly spot some segments that you hadn’t known existed, people are creating segments all the time, everywhere.

You’ll probably remember this new segment next time you’re out riding there. 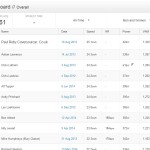 Immediately upon saving your ride to Strava your performance on any segments is rated both against yourself and against all Strava users who have also ever done that segment.

If you get a KOM only to have the no.1 spot taken off you by someone else, you receive an ‘Uh-oh!’ email informing you of such. 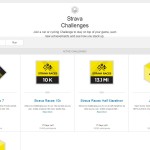 As well as getting sucked in to the practice of segment racing, you can also join up to various Challenges. Strava is unparalleled in its ability to motivate people to get out on their bike and try their hardest.

Challenges are usually based on monthly stats but they can be one-offs or even held to coincide the duration of a bike race such as the Tour De France.

Strava is faintly controversial and sparks passions on both sides of the argument. Its accuracy is often debated (Smartphone GPS is never that accurate) as is the responsibility of making people ‘race’ on roads and trails where other users are present. Users can ‘flag’ dubious results or dangerous segments.

‘Ride hard and be safe’ are Strava’s words.

As a tool for getting people out riding, and riding hard, it’s unbeatable.

For accurate Strava results, consider getting a proper GPS device from us.

Feel free to join the Merlin Cycles Strava Club and join the madness!