The GoPro is the market leader among action cameras. But it’s not a perfect product. TomTom’s action camera has one clear advantage.

Why choose a TomTom Bandit?

The short answer: it’s easy and fast to edit down all your footage on-the-fly into a watchable ‘highlights’ video and upload it to the internet for your mates to see. 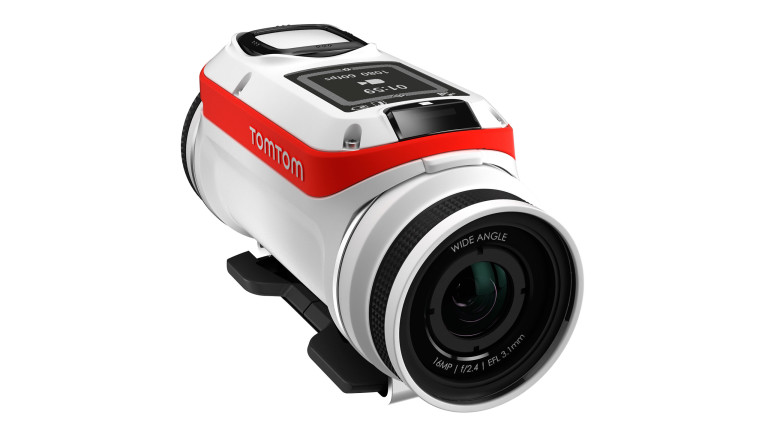 There are some other cool things that the TomTom Bandit does but it’s the post-shooting editing and sharing that is the product’s unique selling point.

With a TomTom Bandit it’s easy to turn an hour of footage into an entertaining three minute video.

Basically the Bandit has a bunch of sensors inside its that know when something interesting is going on and it automatically tags that part of the video and turns it into an appropriate clip.

What do these sensors er, sense?

This means that the Bandit knows when you’ve overtaken someone, done a jump, had a crash, hit your highest speeds, encountered a really twisty section, coughed up a lung, done a proper descent and much else besides. Clever stuff.

You can also manually press a ‘Highlight’ button on the rear of the camera if you want to make sure something imminent gets tagged as a highlight ie. just before a gnarly bit of trail or road.

TomTom’s Bandit specific phone app is how you do the editing and uploading/sharing. Available for iOS and Android devices.

You can drag and drop the clips into a timeline. You can then rearrange or crop the clips. Once finished, hit save. Once saved, hit share and export your new edit to all the usual social media and video hosting sites.

You can even add a track from your music library and overlay it on to your video. 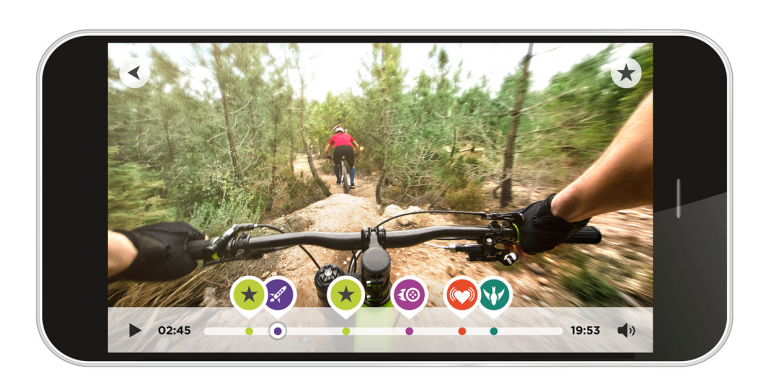 There is also an even simpler way of making a vid – just shake your phone. Select the ‘shake’ option in the app, shake your phone once and the app automatically sorts out an edit of highlights for you.

If the automatic edit looks okay – save and share. If you want to tweak it a bit first (eg. remove or re-order a clip or two) then that’s easy to do.

Okay, so you’r sold on the idea of the easy editing and sharing. What about the quality of footage?

The basic pack includes the camera, adhesive ‘surface mounts’ and a GoPro adapter (so you can use any GoPro-flavoured mount out there). There are other mounts available including handlebar mount, 360 pitch mount, tripod adapter, wrist mount, selfie stick (yes really), surfboard/canoe mount.

If you’ve ever used a GoPro then you’ll know how its minimalist menu and buttons can be a bit frustrating to use.

The Bandit has a large, easy to read LCD screen. Hallelujah! There’s a 4-way control pad around the screen for logically navigating your way around the menus for setting-up or adjusting modes (existing TomTom HRM users will be familiar with this layout).

The main power button is on the back. This doubles as the manual ‘highlight’ button when you’re recording footage.

After turning the camera on the GPS icon flashes while it locates you. This takes less than a minute usually. You don’t have to wait for it if you just wanted to get recording immediately.

Live view on your phone

The phone app displays a live stream from the Bandit on to your phone. There’s a brief menu at the bottom as well for adjusting the more commonly adjusted things whle you’re there (instead of using the LCD screen menus on the Bandit itself).

Unlike other ‘live’ views, the Bandit’s stream is virtually delay-free. This makes it much easier and less confusing when setting the camera up into position. TomTom’s live view is the best in the business.

You can whether you want the video to have the standard wide-angle view, or a zoomed in view.

The battery and memory card come out in a one-piece unit (called the Batt-Stick) and this slots straight into your computer’s USB ports for footage archiving/downloading and battery recharging. No more cables or card readers!

It’s Christmas competition time and we’ve got a TomTom Bandit up for grabs!

Check out the TomTom Bandit at Merlin Cycles