CamelBak are the most iconic hydration pack brand on the market. They are the world’s leading performance hydration system. They pretty much invented the concept of hydration packs and continue to lead the way in innovation and diversification.

In the same way that the Hoover has taken over the name for the vacuum cleaner, hydration packs are simply known as CamelBaks to most riders.

They have a mission to “continuously reinvent and forever change the way people hydrate and perform”.  They also have a vision to “replace bottled water as the most common way to hydrate”.

In 1988 a keen cyclist named Michael Eidson took part in the Hotter’N Hell 100 which consisted of a 100 mile road race in the blazing summer heat of Wichita Falls, Texas.

Eidson understood the need for frequent hydration in order to perform at an optimum level but wanted to cut out the annoying stop/start of drinking from a bottle whilst riding.

Eidson was an emergency medical technician and his job – combined with his inventive brain – lead to the prototype CamelBak.

Eidson placed the I.V. bag into a sock and stuffed it in the back of his bike jersey before locking it in place with a clothespin.

Competitors who laughed at his idea were then left fiddling with bottles and are most likely now using modern CamelBaks.

The first production CamelBaks – ThermalBaks – didn’t really offer anything in the way of carrying anything else apart from water. Soon enough though CamelBak saw the desire cyclists had to ditch their saddlepacks or bumbags in favour of a rucksack-with-bladder system. Hydration packs in other words.

There are now a huge array of different products available from CamelBak – bags, bottles, energy tablets. They do a hydration pack for any and every feasible outdoor activity, let alone every different type of cycling that you can get up to.

A potted (bladdered?) history of CamelBak 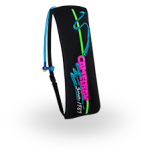 1989 – ThermalBak – The hands-free hydration pack is born. A new concept of hydration to improve athletic pursuits.

1996 – M.U.L.E  (for Medium to Ultra Long Endeavours) – A specifically made hydration pack for cyclists. Improved designs of this pack are still made today. CamelBak are fond of their crazy acronyms: H.A.W.G. (Hold Alotta Water and Gear) is another classic.

1998 – Big Bite Valve – Improved the hands-free aspect of the CamelBak and reduced leaks and
spillages. The patented design is the ‘gold standard’ for hands-free hydration.

2006 – Better Bottle – A hard bottle which has a dip straw and bite valve. Reduces the need to squeeze or tilt to bottle to drink. 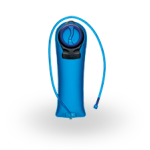 2006 – Omega Reservoir – The classic reservoir that made CamelBak the leading manufacturers of hydration packs.

2007 – Elixir – CamelBak take up the concept of improving hydration through the use of electrolyte tablets.

2011 – Antidote – An improved redesign of the original reservoir.

2011 – Groove Bottle – A water bottle with an added filtration system. 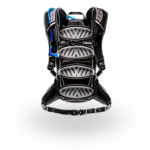 2012 – All Clear Bottle – An innovative UV microbiological purification system which creates drinkable water for unclean sources such as streams and rivers.

2013 – NV Back Panel – Ventilated back cushioning which improves comfort and breathability.

2014 – Relay Water Jug – A water pitcher that filters water as it enters the jug.

There are an increasing number of ‘pretenders to the throne’ when it comes to hydration packs. Every year there seems to be another cycling brand who start making their own packs. But still the King remains.

CamelBaks remain the best made, best designed and best functioning hydration packs. There are cheaper brands out there (there are more expensive ones too). There are other brands with wacky features/gimmicks and oddball colourways. But no one has the rep of CamelBak.

A lot of riders do occasionally experiment with a different brand of hydration pack but they all return to CamelBak in the end.