The whole spectrum of bikes and riders is on display at this huge sportive. See if you can recognise yourself amongst any of these stereotypes.

It’s a great event. If you were there…

Did you spot any of the following?

Someone with a complete mess of a bike at the start and thinking ‘how on earth are you going to get round on that?’

Someone with a complete mess of a bike at the finish and thinking ‘how on earth did you get round on that?’

Someone with saddle way too high.

Someone with saddle way too low.

The tallest bloke you’ve ever seen on a bike. Last year’s winner for me was ex-rugby player Martin Johnson but there was a guy this year that dwarfed him, I’ve never seen a head tube so tall before!

Someone in trainers – probably passing you.

Someone with a proper Duke Of Edinburgh Award Scheme-style rucksack.

Someone on a mountain bike.

Someone on a Brompton.

Someone in fancy dress.

Someone with jersey pockets sagging so much they nearly touch the back wheel.

Someone with music blaring out.

Tall skinny bloke on fast bike thinking he’s in the Olympics and barging past everyone.

Someone with full panniers.

Someone with black shorts and white leg warmers.

Someone wearing a canoe/climbing/horse riding helmet.

Rider smoking at a feedstop.

Someone riding the last few miles on a flat tyre.

Someone giving it full beans for the finish line and then giving it the best victory salute outside of the World Tour. 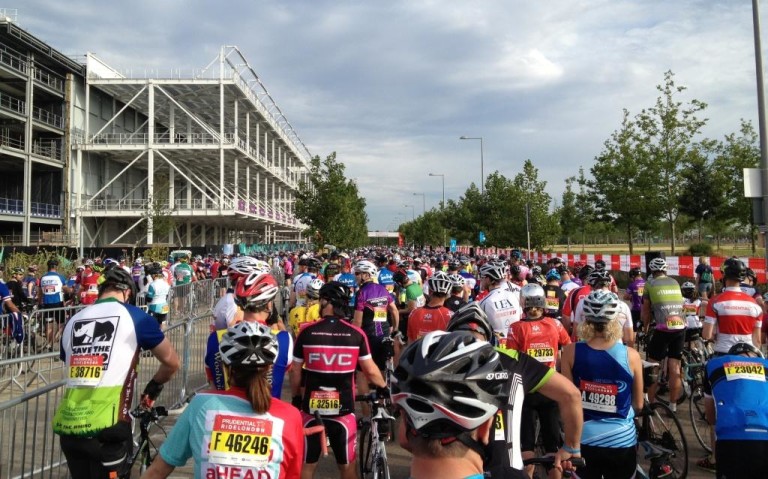 How did it go for me?

“No one has ever fallen on the start line.”

These were the first words I heard from the announcer at this year’s RideLondon at the start point in the Olympic Park. Thankfully me and the other 25,000 riders all got away cleanly and that statistic stays intact. 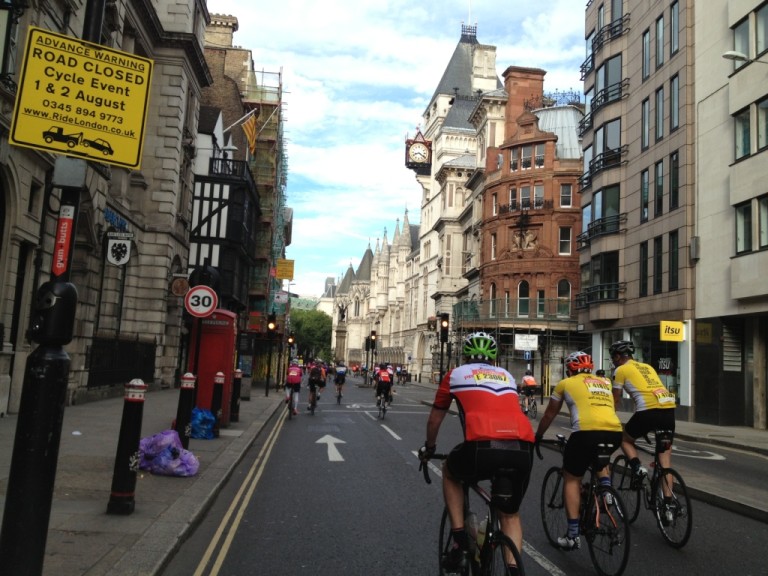 This year’s event was very different to last year’s for various reasons. The number one reason being the weather. Last year the tail end of hurricane Bertha battered us with torrential rain, cold and wind. This year was run in beautiful sunshine with hardly any wind at all. 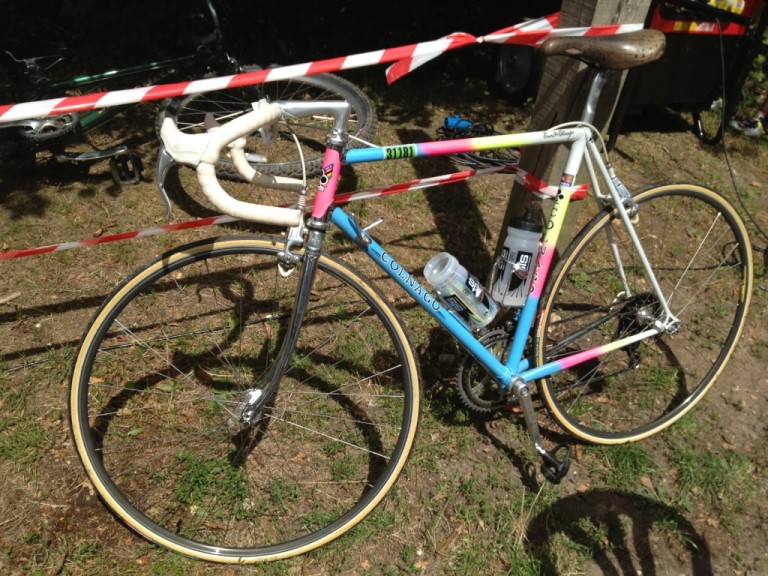 The number two reason is personal. For me was the aim this year was to enjoy the ride rather than busting a gut “setting a time”. And what a difference it made.

Entering with a longer ETA ride time meant I had a later start, which was very welcome. 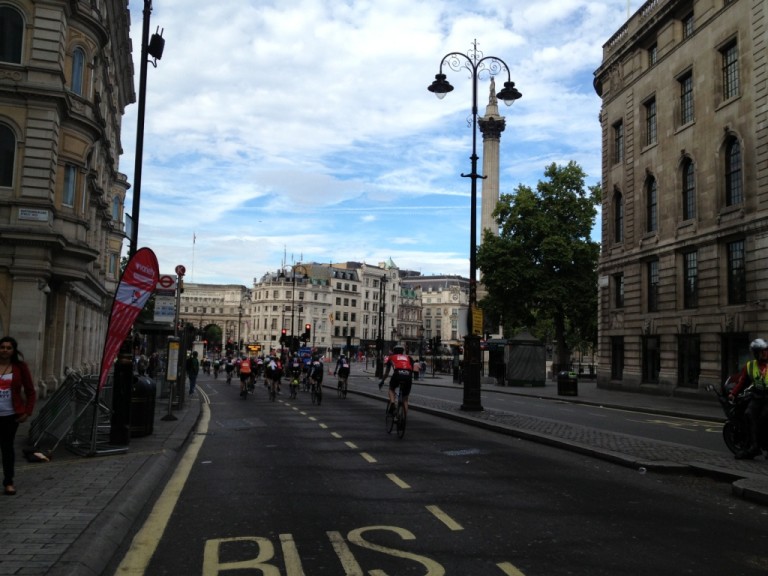 It also meant that there was no race from the gun unlike last year and a more enjoyable (but still fast-ish) ride, ticking off the landmarks in the city before heading out into the quiet countryside. 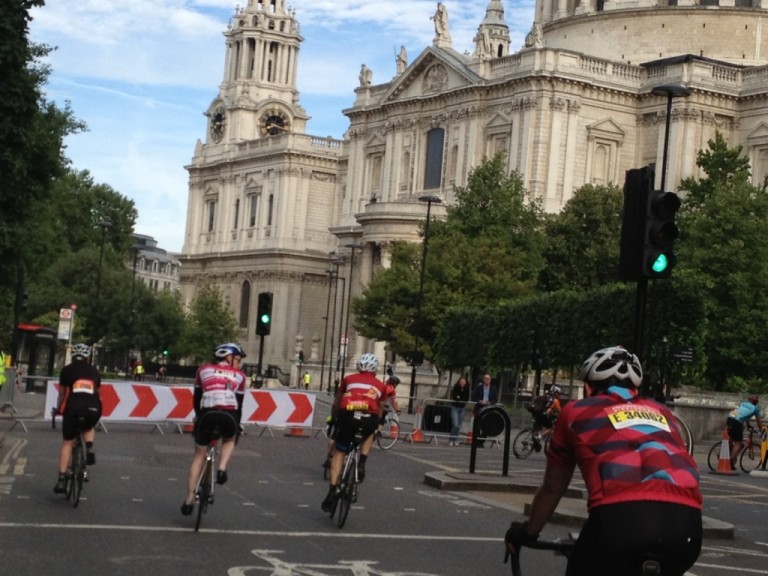 I even stopped for a coffee and pastry in a petrol station en route and watched everyone whizz by for a while. 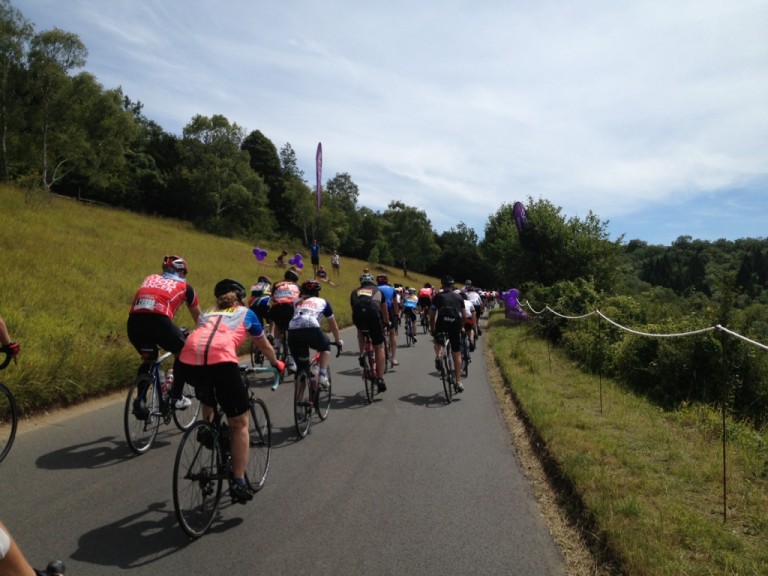 A steady early pace meant the two hills – Leith and Box – came and went easily and I still had plenty in the tank for the last 20 miles. 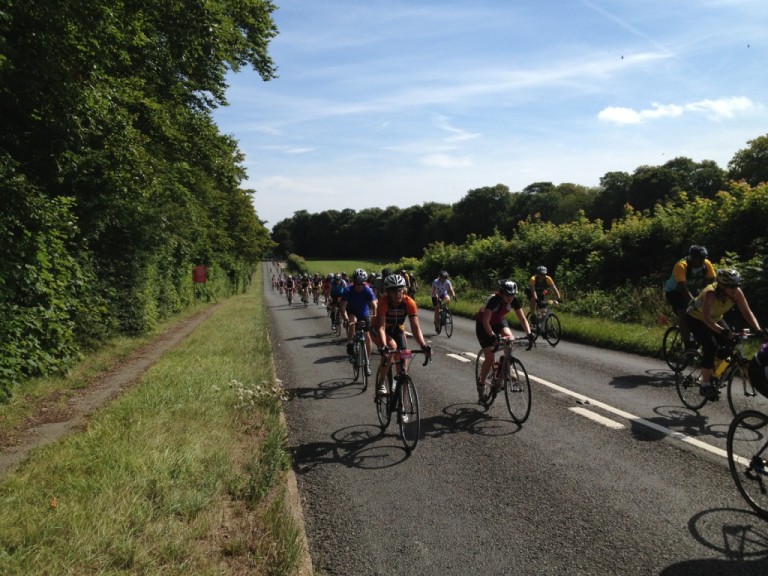 This was the most enjoyable part. The crowds were out in force by now and giving plenty of encouragement to us all. Before I knew it I was back in central London on the Mall and it’s all over (bar the obligatory photos outside Buckingham Palace). 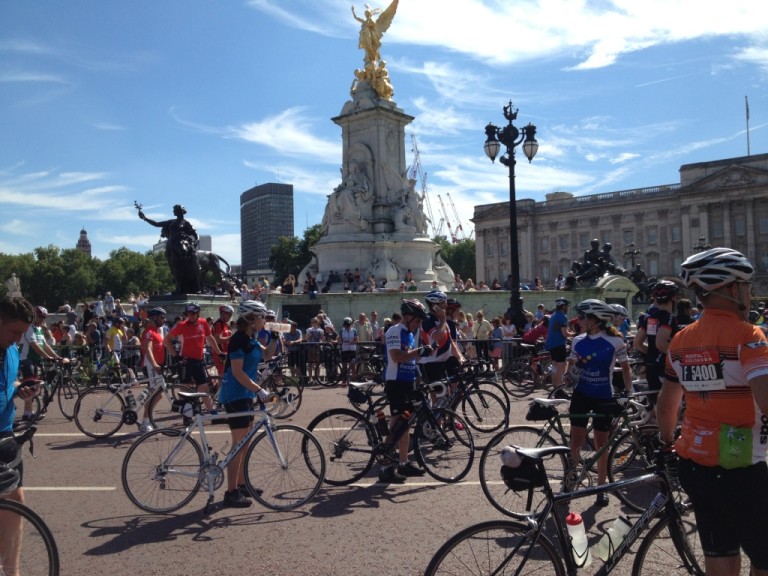 It was great to see so many people who clearly wouldn’t otherwise ride a bike over such a long distance. All taking part and enjoying it. There were hundreds of different charity jerseys so there was clearly lots of money raised for excellent causes.

There was plenty of support from various charity groups out on the course too who cheered everyone but went especially enthusiastic for one of their own riders. 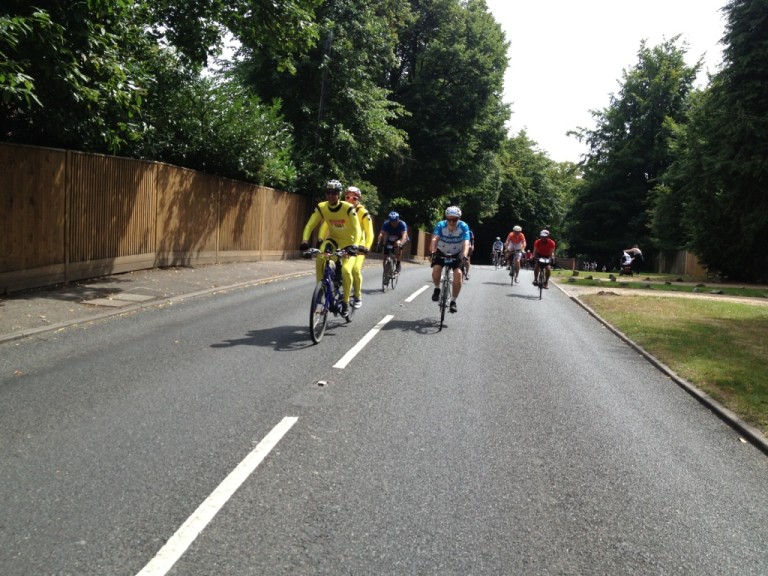 I’ll be back next year for sure!