New Shimano XT – XT M8000 as it’s officially known – is the most eagerly anticipated groupset this side of the millennium.

There are traditional double and triple chainring option offering up a huge gearing range that’s even broader than anything ever released by anyone before. 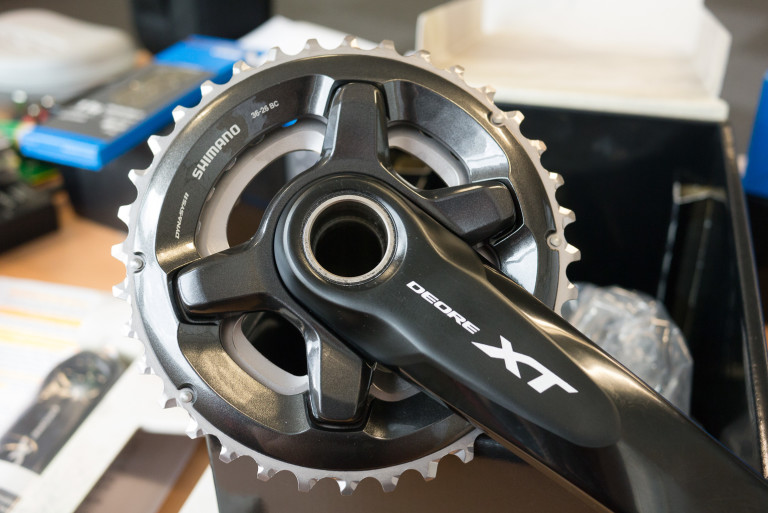 As ever, Shimano cranks are hollow forged alloy. You’ll not find anyone else offering this technology at this price point. 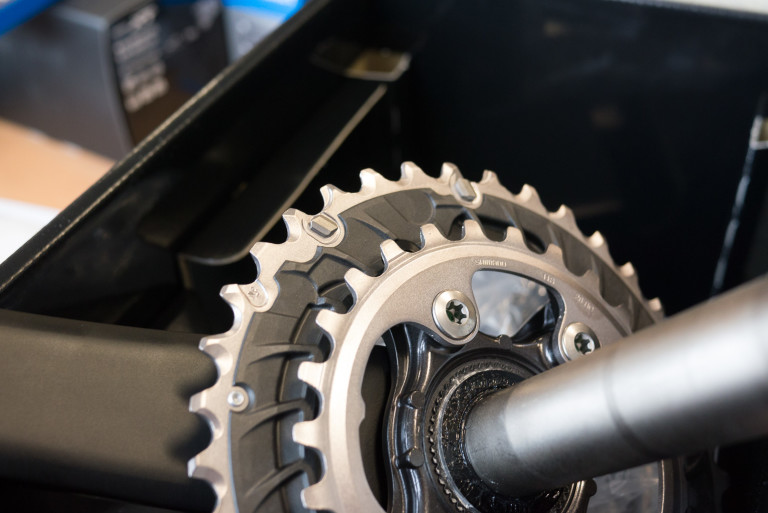 The chainrings on the double and triple chainsets offer the same shark fin-shaped teeth profile as found on the single ring chainset. It’s these teeth that hold on to the chain really tightly to prevent dropped chains on rough terrain. 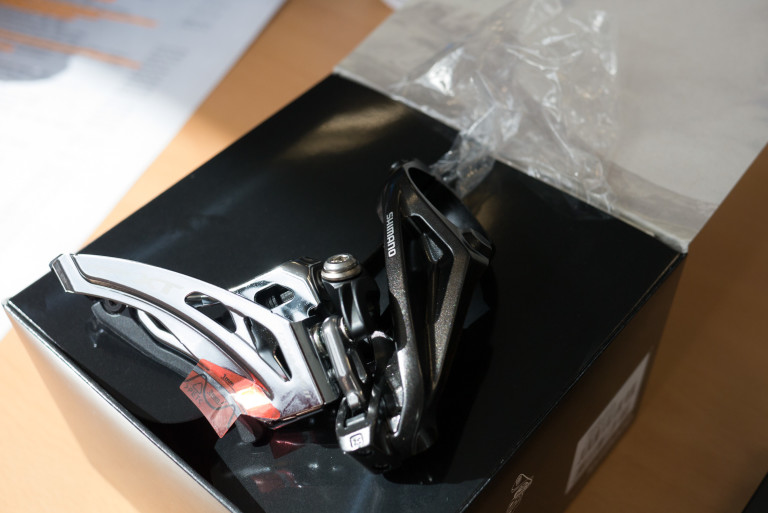 The new M8000 front mechs have been designed to work better on bikes with short chain stays and large wheels (29ers or 27.5″ wheels with big tyres). The cage has also been designed to offer better shifting traction on longer travel frames. 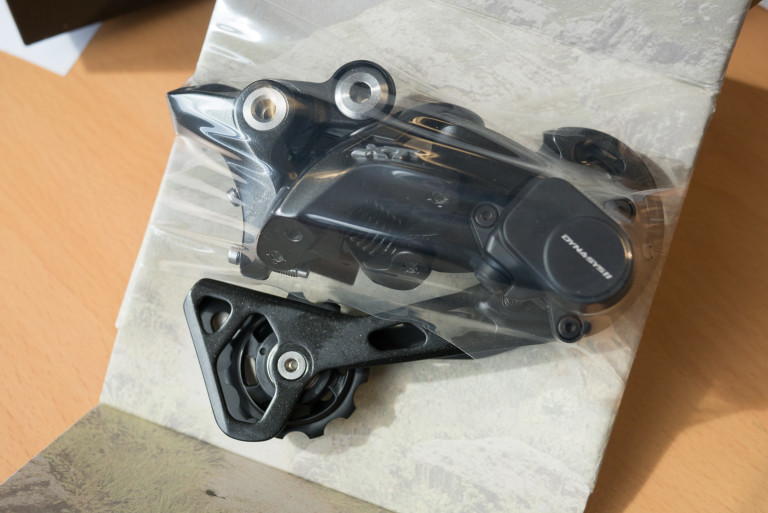 The rear mech is available in two different cage lengths: SGS (for multiple chainrings) or GS (for single chainring). 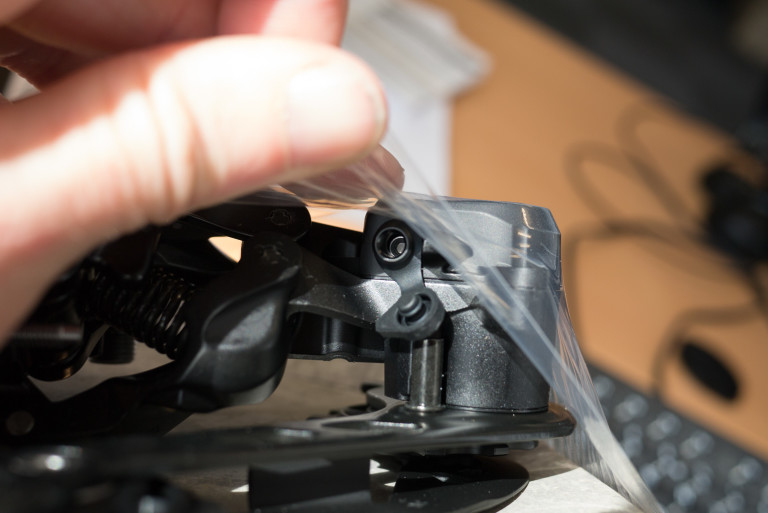 The mech’s clutch is tunable (via the hole seen in the above pic) so you can tone the tension down for calmer terrain or crank it up for rough stuff. 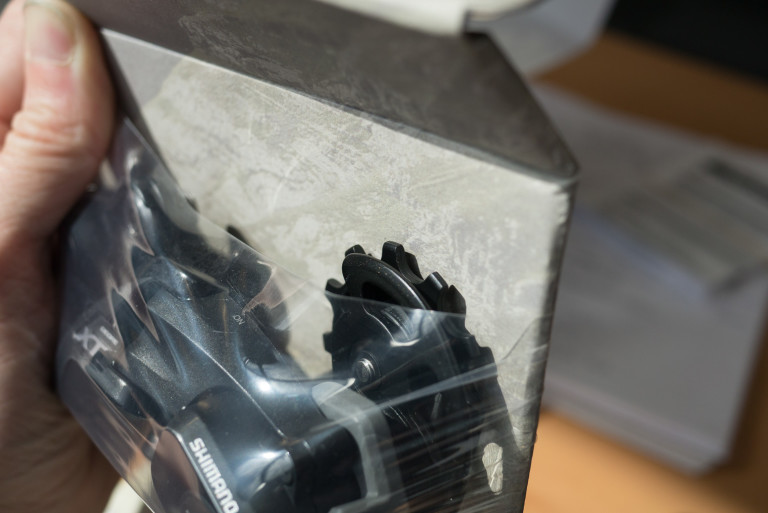 The upper jockey wheel has taller teeth than before too for more accurate shifting across the massive cassette.

The more talked-about option though is the single chainring system.

As mentioned above, the single ring option has a chainring with specifically shaped teeth (like reverse shark fins) that tenaciously hold on to the chain over rough ground, doing away with the drag, clutter and weight of an additional chain device. 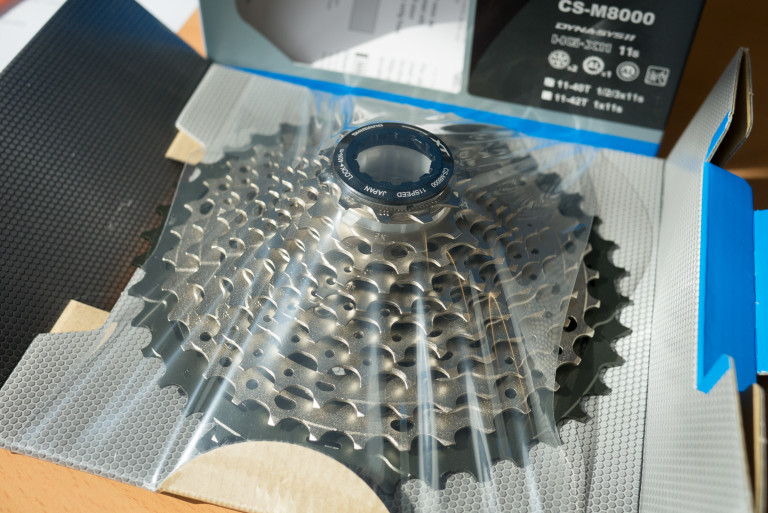 The 11-42T cassette is a wide enough range of gears for the vast majority of mountain bikers. Those who ride in big mountains won’t mind a bit of spinning out on fireroad descents in exchange for the performance reliability and climbing capability. 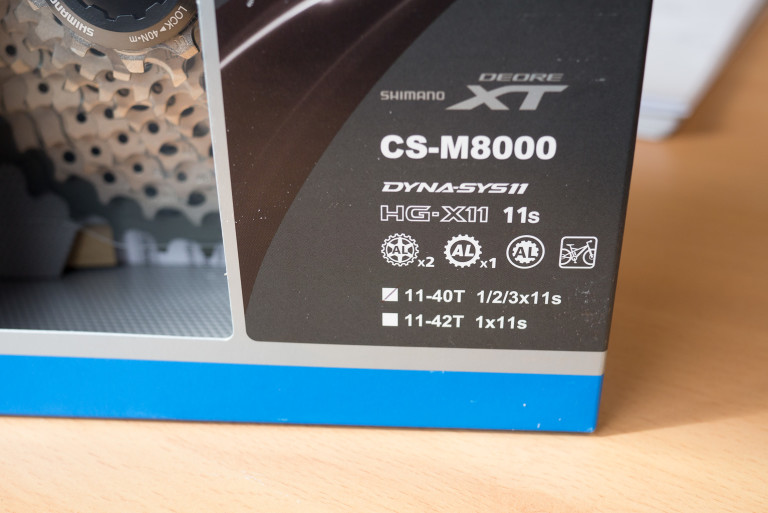 Similarly those who ride or race faster, XC terrain can choose a larger chainring size and can deal with the brief periods of stiff climbing. There’s also a 11-40T cassette aimed at the speedier end of the riding spectrum.

The biggest three sprockets on the cassette have a five tooth step between them. Shimano have called this the “Rhythm Step” and it essentially means there’s less of a drastic change in gear ratio when shifting in the top gears compared to Sram’s six tooth gaps.

Why is it so eagerly anticipated?

M8000 XT offers you all you ever need and no more. And it does it with Shimano’s usual level of sorted-ness. More than ever before “Shimano = sorted”.

Let’s be honest here though. New XT wouldn’t exist without Sram. It was Sram who brought single-chainring wide-range cassette drivetrains into existence with their ground breaking XX1 system.

In many ways Sram over-delivered. XX1 was hugely expensive. It was extremely lightweight – arguably at the expense of durability. It required you to buy a new rear wheel too – or if you were lucky you could change the freehub on your existing wheel to get XX1 to fit. You could say it was all a bit OTT really and rather off-putting the Average Joe MTBer.

If you are looking for a drivetrain for a mountain bike and you have some money to spend (but not loads), there is simply no reason to choose anything other than XT M8000. Why choose anything else?

Does it work with your existing stuff?

Very probably. No new freehub required. Everything fits on to established common standards.

You can also keep your existing 10 speed chainset and narrow-wide chainring. Yep, you can keep your much-loved cranks and not-worn-out-yet chainring and just run new XT cassette, chain and shifters. 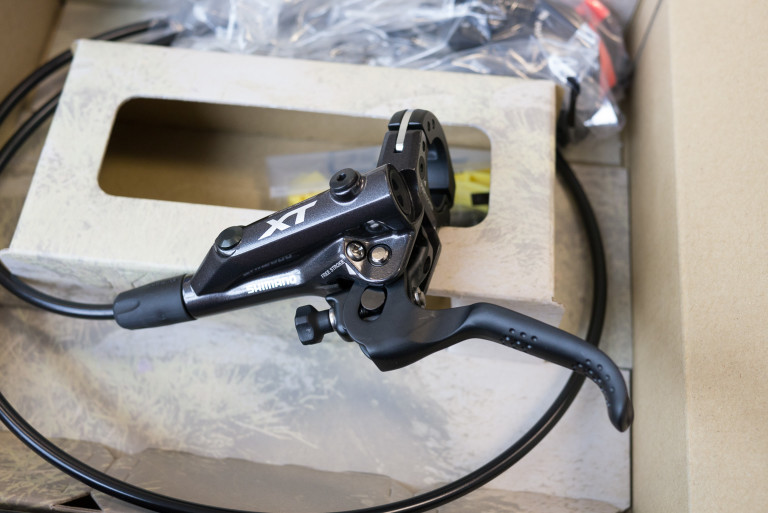 We forgot to mention the disc brakes!

It’s testament to Shimano that you don’t really think much about XT disc brakes. You just know they’re going to be excellent. Not a whole lot has changed on M8000 series XT brakes. The reservoir has been re-styled a bit and caliper bite point has been changed to make the brakes ever so slightly less grabby but that’s about it. 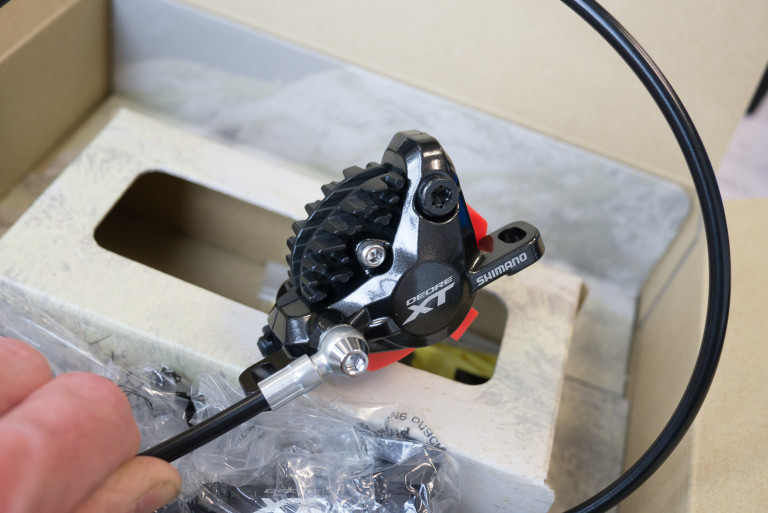 If it ain’t broke. 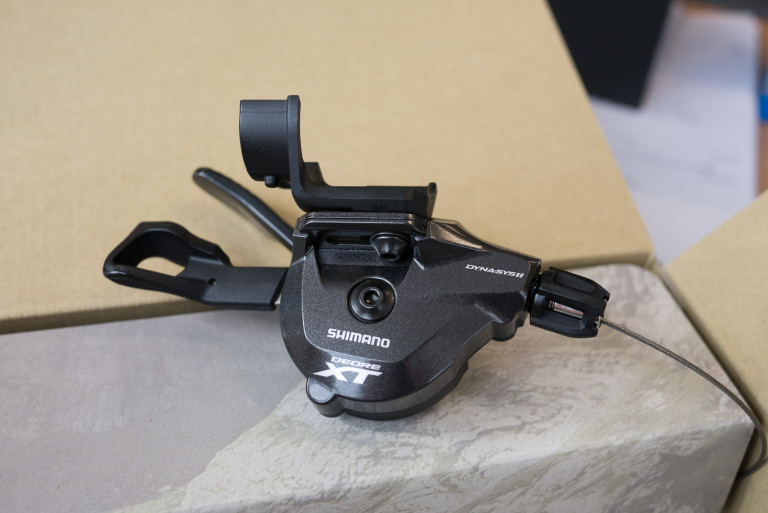 And what about the shifters?

Again, not a whole heap of anything has changed. Slightly lighter action (20% reduction in shift effort). A bit more clicky. As well as regular clamp you can get them in I-SPEC flavours so you can attach your (Shimano) brake levers and shifters to just the one bar clamp. Space-saving. Neatness.

The triple chainring option is a curious thing. We can’t see very many mountain bikers wanting it really. Maybe all-terrain touring bikes is where the XT triple makes sense!

The single chainring option is getting all the hype. And it’s probably justified. Experienced riders and racers will already be sold on the idea. They’ll be gagging at the chance to dump their front mechs and still be left with a good gearing range and a well-retained chain.

The double chainring option is perhaps what the silent majority of mountain bikers will be most interested in. The type of rider who doesn’t currently experience any problem with loss-of-chain on rides. Cross country trail riders looking for a large range of gears capable of going anywhere without losing out at either end. Nicely topped off with the best disc brakes in the business.

4 comments to “Is The New 11 speed Shimano XT the Best MTB Groupset Ever?”