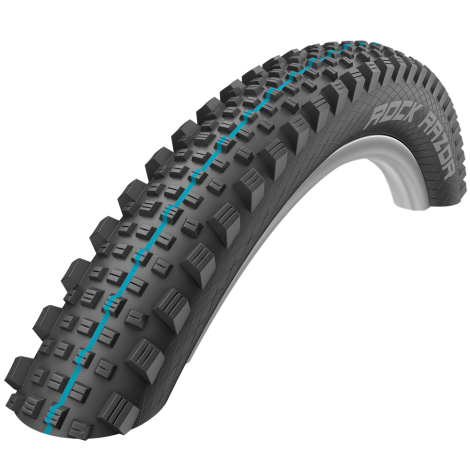 View options as list
Add To Basket Email Me
Multi-Buy Savings!
Code: 47486-RR
Schwalbe Rock Razor Addix Folding Tyre - 27.5"
The semi-slick Rock Razor is a super fast tyre for dry dusty trails. Little rolling resistance and little weight. Primarily for use on the rear wheel. The Tread design has flat studs in the centre of the tread for good corner grip with sturdy lugs on the tyre shoulders.
Addix SpeedGrip Compound
The universal compound. It definitely has the widest range of use. Perfect for XC, AM and Trail: for the majority of EVO tires there’s a version with ADDIX Speedgrip! It replaces the previous PaceStar compound where a significant, though not the only difference, during extensive use is more mileage and a longer life.
Addix Soft Compound
Is a compound that bridges many disciplines. It’s just as at home in the enduro and downhill world as it is in the demanding discipline of all-mountain and trail riding.  Super Gravity version ADDIX Soft has a Puncture-proof covering (with Apex) with extreme lateral stability for a dynamic ride.
Specification:
View All Schwalbe Products
Mr Robertshaw I've had a previous incarnation of a Rock Razor in the past so knew the lack of rolling resistance would be good. The new tires are now pitched as being harder wearing and the texture of this tire compared to anything else I have was not as 'rubbery' but more 'plasticy' and harder (best way I can describe it). I found that this meant it was difficult to seat on the rim tubelessly as it didn't mold itself to the rim to prevent air escaping in the initial stages of trying to blast it on there with the compressor pump I used. I eventually soaked the whole thing in washing up liquid to bridge any air gaps between the rim and tire and it went on. Once on there there were no leaks, even though the rim I have have a few dings that other tires have leaked at until the sealant takes hold. Rolls really well and grips pretty good too. They're a bit expensive but I really like this tire.
Tony Great tyre for local trails! Haven’t tried them in greasy conditions yet but so far so good.