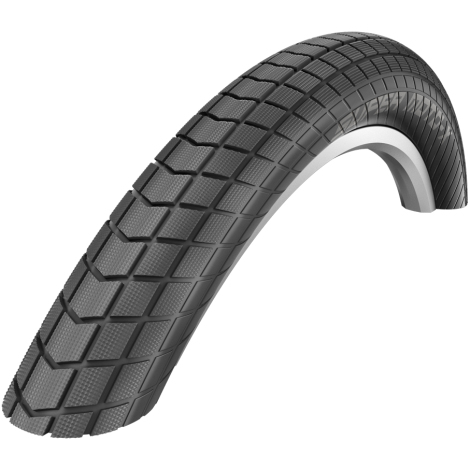 View options as list
Add To Basket Email Me
Multi-Buy Savings!
Code: 47309-MOTO
Schwalbe Super Moto-X Performance RaceGuard SnakeSkin MTB Tyre - 27.5"
Wide, comfortable, safe! Whether you're travelling on tarmac or trail, the beefy Super Moto-X offers you the best riding characteristics and plenty of comfort. The 3mm GreenGuard protection and reinforced sidewalls lets you reach your destination safely, even in the toughest of conditions. Exclusively in the new trend size of 27.5+. Naturally with the mark for fast e-bikes.
Features
View All Schwalbe Products
Bb4h Very good very nice
Mr Henley Bought these bad boys after doing some research and found a good price with Merlin cycles. I fell off my bike on the roads going to work with MTB tyres on my ebike. These tyres have so much grip on roads it's actually crazy. I can make a last minute turn without hesitation unlike my other tyres. Rode over glass today because it was everywhere probably chavs... Anyway no puncture. Only down side is going on wet grass or dirt you will slide sideways.... I cut a corner that was really square 90 degrees pavement with grass on the apex and I levitated sideways until I hit the pavement but I regained grip instantly. Kind of scared me so yeh avoid that and keep on the concrete and you'll love them.
Mr Mccann These tyres are amazing put these on my voodoo mambo 27.5 plus bike love them and it stands out compared to other mountain bikes. Makes the ride more enjoyable
Grant My general preference is to ride on off road tyres, however, given that I ride mostly for the commute to and from work along paths and trails it was getting to be quite expensive replacing knobbly tyres as they get worn down very quickly, so I decided to try out these tyres. Obviously they do not have anything like the level of grip you get from offroad tyres, they cope fine with gravel, hardpack dirt, and grass which has a firm bed, though any kind of mud and they slide all over the place, though that's to be expected. They run around 2 - 4 mph faster than a knobbly tyre which surprised me given they weigh over 1.1kg per tyre and the tyres they replaced only weighed around 750g though shows the difference the tread pattern can make to speed, done a couple of hundred miles so far and not had any punctures, not expecting any either, in the past I had marathon extremes which lasted over 2500 miles without a single puncture and I've yet to come across a tyre brand that equals Schwalbe's quality when it comes to puncture resistance
Mr Hastings Great tyre, good on road grip and so quiet too
Mr Nice Very good tyre at a great price
Mr Holt Great tyres at a very reasonable price. Roll really fast on road on my MTB tandem. I have Schwalbe tyres of various models on several bikes and can’t really fault them
Jamie These tyres were required to replace cross county ones on my Specialised Fury 650b + as I wanted to commute on tarmac and gravel. They fitted the rim size perfectly and are durable, tough and smooth running on both surfaces with hardly any friction. They weigh less than the off road tyres the bike was spec'd with and they came within two days of ordering which was a bonus as well. If you have wider rims and want 'slick' tyres for tarmac/gravel then I recommend these
Mr Hickman Great tyres loads of grip and plenty contact area. Bought for use on pump track.
Mr Red A slick tyre that won't murder you if you lean into corners. Smooth enough to get your speed up, grippy enough that you don't eat floor. Awesome
Mr Andelin Very nice tyre that runs smoothly and very quietly. Looks good too.
Mr Thompson Bought this to replace nobbly tyres on my eMTB. I use it mainly for commuting and these tyres definitely roll faster. Grip seems very good in the wet and no punctures so far. It's good to find a plus size tyre which is more touring orientated as most are narrow and can ruin the look of the bike in my opinion.