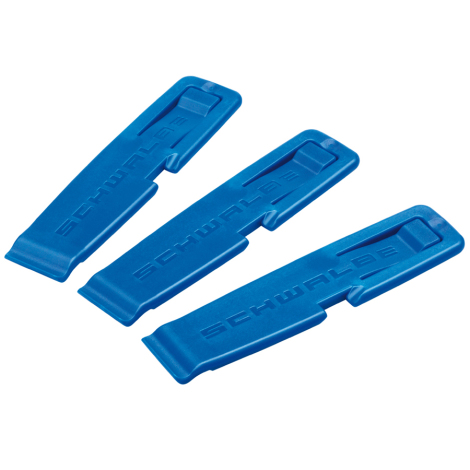 View options as list
Add To Basket Email Me
Multi-Buy Savings!
Code: 4114
Schwalbe Tyre Levers x 3
Makes changing tyres a snap. The new shape and surface of the tyre lever makes the assembly and disassembly of a tyre more enjoyable. For both tyres and hands too!
The new tyre levers are especially helpful in difficult assembly operations. Clip it onto the rim, to fix the already mounted section of the tyre, and it won't slide out when the last section is levered onto the rim.
View All Schwalbe Products
JohnR A compact set of levers which won't damage tyres and rims. The ability to clip these on the edge of a rim is a valuable feature as it avoids the frustration of a tyre coming off one part of a rim when putting it on another part.
Marcus Elliott These are my fourth lot of Schwalbe tyre levers. I have bought multiple for the different saddlebags I run on various bikes. They work, they're cheap, and the extra width than normal levers make them easier to use. The rim slide thingy also comes in handy.
Simon Not used yet but seem sturdy enough for the task at hand.
Andrew Best tyre levers for tight tyres
Michael Nice tyre levers. Not as strong as some more heavy duty ones but more than sufficient if used properly.
philip Excellent quality levers
Mr Gelling These are amongst the best I've found for difficult tyres although eventually they wear at the ends. At the price, great.
Craig Seem decent so far, a little bit of flex to them but nice and wide so makes it easier to seat or removed a tyre.
Mr Rae Great tyre levers worked great on a tight Conti tyre.
Mr Craddock Didnt expect much for the price, but these are actually great solid levers, been able to lock the 2 on the rim and use the 3rd to get that last bit of tyre on was a dream! Great product
Michael V. I would have never been able to get my Scwalbe Pro One tubeless tires mounted on my Mavic Carbon UST rims without these levers. An absolute must when installing road tubeless as the bead clips keep the tire from slipping off as you get the last bit of tire on.
Mr Rogers These are especially valuable when installing tight tires on fussy rims. They hold things in place as you make progress - eliminating the "one step forward and two steps back" that often happens when mounting tough tires.
Phil The Hill Strong and thin tyre levers which do seem to work without breaking putting on a Marathon Plus tyres
Roland Thin so easy to get under the rim. Very strong. A tyre lever is a simple piece of kit but these are the best I have used (second pair for second bike)
Mr Finkelshtein Nice set of levers, tried them on a pair of stubborn MAXXIS Minion tires - did the job perfectly .
shaun Best tyre levers on the market