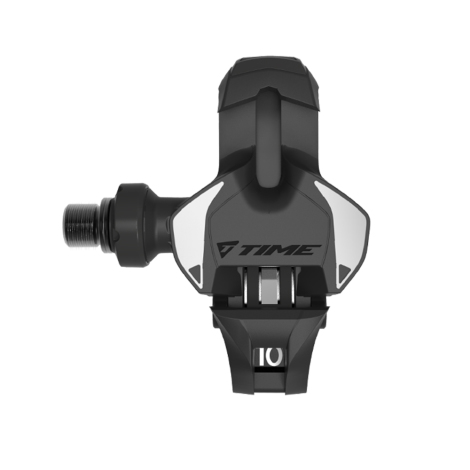 XPro pedals take the Xpresso to the next level. Featuring a larger platform for even greater power transfer and a lower cover for increased aerodynamics and protection for the carbon blade.

View All Time Products
R Limited use so far but really like them. The sideways float is odd to get used but I like it now. Very light and the supplied cleats clip in very sweetly.
Nex Excellent pedals with proprietary angular movement compliance. Although it must be said that cleats do wear out quicker than with other brands... Let us hope Sram gets this brand up to the level it deserves.
Dr Sargan Judging on the first few rides these are a good peddle and an improvement on the similar Xpresso because the carbon spring is now protected from below and this leaves a smooth surface for pedalling when unclipped if needed. But I would caution that the only reason I bought them was because I had Xpressos on three bikes, and when a carbon spring broke on my commuter after about eight years of use (±15000km, lots of clipping and unclipping) I found that I could not buy a replacement spring alone, so had to buy a pair of pedals. On trawling the web I realised this was a common complaint. I seriously thought about changing cleat system on all three bikes, but couldn't afford it. I do like the Xpresso/Xpro system otherwise.
Mr Greenwood Been using Time pedals since they first came out (not fixed like the early Look ones) This model is the best yet.
TonyE Great improvement over Xpresso pedals
TJ LOVE them! Much better thank my Keo Classics I had before.
Mr Ishihara Since I used expresso 10 before the model change, I could easily understand that this product has greatly improved in appearance and performance.If you are new to Time pedals, why not try using this product for the first time? You will be satisfied.
john Excellent pedal, light and improved, love the level of float on these pedals, Excellent for dodgy knees
Mr Sewell Great pedals for the money. I have always used time and these are great.
Mr bean I used to play other sports but these took their toll on my knees. I took up cycling a decade ago and had Time pedals recommended to me; they are great, knee pain gone, easy to click in and out and light. The cleats do wear down quickly if you walk a lot but who wears cycling shoes to walk - mine last about 10,000 miles (3 years summer use). Definitely recommend.
Shane Having been using Time pedals for over 25 years and with the classic RXS pedals being discontinued, I thought I would try the cheapest version of the XPRO, before upgrading my other bikes. First impressions are that these are an improvement on the RXS, mainly due to the larger surface area. Pedal engagement is easy and snappy with a nice sound to boot. Pedal release is harder than the old RXS even being set on the easiest of the three release levels. The pedals look nice with the exception of the front end which looks very clumpy (I'm sure this could have designed better). My only negative comment on these pedals are that they aren't weighted to fall to the 12 / 6 o clock position. Therefore clicking in can be a lottery depending on where the pedal sits. In traffic this can be a real pain. Overall very pleased.
Dr Warren These pedals represent very good value. They're very light, easy to click and out of and seem reasonably robust. Not particularly elegant, perhaps, but then few pedals are.
JcO Wide base and very easy to engage and disengage
DeuceDog Good light weight pedal for the money, but they could be better if they were a little heavier at the rear to aid clipping in .
Mr Gibson Time have had a couple of attempts to replace the RXS pedal system which I have used for years without problems, it appears to be no longer in manufacture now. The XPRO is an improvement on the Expresso and a superb successor to the RXS
Mr Clark Fantastic product. I first used Time shoes and pedals back in the early 90s. Back then they provided far more float than any other product on the market. I've only just started road cycling again and after a bit of 'Google' research I decided to invest in Time pedals again. I'm thrilled to bits with them. Massive contact area so no pressure points, the float is amazing and I would be surprised if anyone encountered knee problems with these pedals. They are very light. The pre-engage mechanism works very well too. Basically, when you unclip your shoe, that movement of foot is used to pre-engage the locking mechanism. When you subsequently clip in, you don't have to overcome the tension of a spring. Just press your foot down lightly and the mechanism releases the pre-tensioned spring and you're in! Do I have any gripe at all? Yes, they are unattractive!
John I've been riding on TIME pedals since they were introduced, and I've never had a knee problem. These are the best I've had. The new iteration has a lower profile, much easier to step into for some reason, and a solid feeling. Merlin's processing is quick, and shipping is fast. I would buy from them again.
Mohammad Very nice self centering pedal (easy on the knees) the sharp edge of the previouse model is removed. But it is heavier than previous models