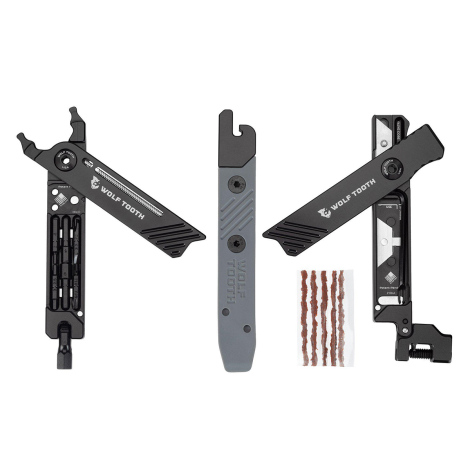 View options as list
Add To Basket Email Me
Multi-Buy Savings!
Code: WT8BITKIT
Wolf Tooth 8-Bit Kit One Multi Tool
The Wolf Tooth 8-Bit Kit One stackable multi-tool set includes three 8-Bit tools bundled together – the original 8-Bit Pack Pliers plus the 8-Bit Tyre Lever and Rim Dent Remover Multi-tool and 8-Bit Chainbreaker and Utility Knife Multi-Tool.
Combined, these three tools give you a mini travelling workshop to solve virtually any roadside or trailside repair. Each tool is connected to the next using magnets and pins. As a whole, Wolf Tooth 8-Bit Kit One reimagines the humble cycling multi-tool into an innovative, slim and multifunctional design.
Wolf Tooth 8-Bit Pack Pliers
The centrepiece of the Wolf Tooth 8-Bit Kit One, the brand’s bestselling 8-Bit Pack Pliers features 17 functions from master link pliers to Torx bits, bringing superb functionality in a lightweight design that’s made in the USA from aircraft-grade aluminium.
Eight attachments nestle in the pliers and are held in place with magnets. The attachments can be attached to a ball dent swivel head that doubles as an 8mm hex bit. When the swivel head is angled, torque can be added to break loose a stubborn bolt or pedal. Unbent the swivel head acts like a screwdriver for quick unwinding.
The master link pliers borrow their design from Wolf Tooth’s pack pliers. They can be used to install and remove a master link, as well as tighten and loosen a valve stem lock nut. There is storage space inside the 8-Bit Pack Pliers for a spare master link. A rasp is stored in one side of the pliers, which can be used to dislodge any stuck sealant in tubeless valves.
Wolf Tooth 8-Bit Tyre Lever and Rim Dent Remover Multi-tool
The Wolf Tooth 8-Bit Tyre Lever and Rim Dent Remover Multi-tool features a two-ended design for essential roadside repairs combining ease of use and maximum leverage.
At one end, the thin, nylon composite tyre lever is designed to easily slip under the tyre bead  whether you’re running slimline road tyres, wider gravel rubber or full-on knobbies. With a secure hook and ultra-strong construction, it only takes this one tyre lever to wrest even the tightest rim-tyre-combos.
At the other end is a rim dent remover, which is specially shaped to fit over the lip of metal rims and tested for strength and robustness in harsh Minnesota conditions. The dent remover is designed to help you restore metal rims to rideable condition at the trailside in case of a rock or pothole hit that dings your rim.
Wolf Tooth 8-Bit Chainbreaker and Utility Knife Multi-Tool
The Wolf Tooth 8-Bit Chainbreaker and Utility Knife Multi-Tool provides three additional tools for cyclists based on rider feedback  expanding the 8-Bit system’s ability to take on more roadside and trailside repairs than ever before.
Firstly, there’s the chain breaker, which was a feature highly requested by riders of all disciplines. With a robust and practical pivoting-head design, the included 3mm hex key (which locks in the handle) is used to easily operate the chain breaker.
The other end of the hex key features a tyre plug, perfect for use with bacon strips to reseal larger holes in tubeless tyres that sealant alone can’t fill. The tool also includes storage space for bacon strips.
At the opposite end to the chain breaker, Wolf Tooth has included a mini utility knife blade which is perfect for cutting off the ends of the bacon strips once you’ve plugged a hole. There’s also extra mini knife blade storage included so you can always have a sharp blade to the rescue. Finally, there’s storage space for an extra valve core  just in case.
Features – 8-Bit Pack Pliers
Features – Wolf Tooth 8-Bit Chainbreaker and Utility Knife Multi-Tool
View All Wolf Tooth Products