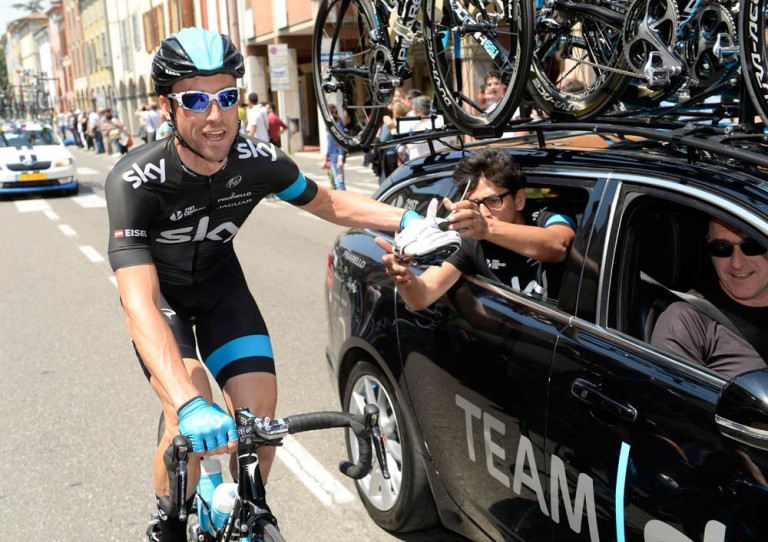 Bernie Eisel doing a different kind of hanging on earlier in the stage.

When Sky put their riders to the front with 10km to go, the pace immediately upped with riders stretched out in one long line and many immediately went out the back. Dario Cataldo set such a pace on the front that even his team mate Bernie Eisel couldn’t sit on his wheel and had to drop out of the line on the climb. Cataldo stayed on the front for practically the entire climb before Edvald Boasson Hagen took over.

Going over the top and on the descent Boasson Hagen strung them out then stayed on the front for as long as possible doing a massive turn for Swifty but at about 2km other teams joined in and he got swamped. Swifty was always second wheel for about 5km and eventually got 9th on the line. Hats off yet again to Nacer Bouhanni (FDJ.fr) for taking his third stage win at this year’s race.

Wasn’t it great to see both Irish riders in the break today? 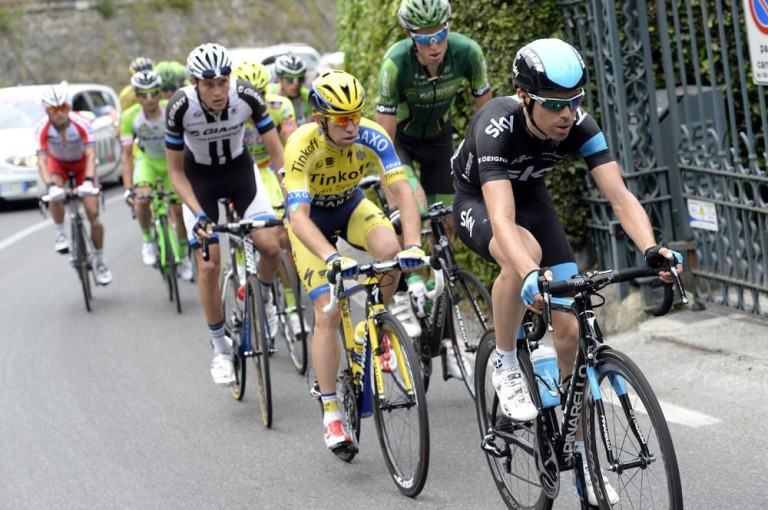 OK so we’re being partisan here but it was great to see the two Irish riders in this year’s race, Philip Deignan (Sky) and Nicolas Roche (Tinkoff-Saxo), in the break today. It was especially good to see Deignan as he showed justification in his selection for the race and also his return to top class racing again this year with team Sky. Roche’s overall ambitions took a knock on the first week of the race so was good to see him active today and leading the attack which eventually led to his team mate Michael Rogers soloing away to take the stage win.

The incredible story of Rigoberto Uran 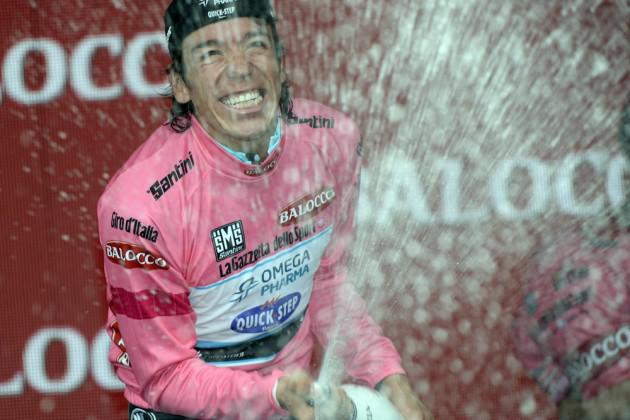 Rigoberto Uran (Omega Pharma-Quickstep) became the first Columbian ever to wear the pink leader’s jersey in the Giro by winning the stage 12 time trial. The rolling course suited the punchier riders more than the TT specialists and Uran blitzed the field to win by 1min 17secs from the Italian Diego Ulissi (Lampre-Merida).

Uran’s background is an incredible one very much like the classic riders of old and definitely not privileged. He was introduced to cycling at age 14 and shortly after his father was murdered Rigoberto had to take his place as a lottery seller to help the family survive.

He continued cycling as well as providing for his family and turned professional at age 16 for a small Columbian team. He moved to Italy at 19 and spent two years racing full time before moving to the big league with Spanish team Caisse d’Epargne for three years. This lead to a move to Team Sky in 2011 where his talent really shone.

At the 2012 Giro d’Italia he won the young rider’s classification and was second in the Olympic Games road race. The 2013 Giro announced his arrival as a bona fide GC contender with second place overall as he became team leader after Sir Bradley Wiggins’ withdrawal. A move to Omega Pharma-Quickstep for 2014 means he is the undisputed team leader for Grand Tours and so far it looks like it’s paying off.

The breakaway stays away.

Marco Canola (Bardiani CSF), centre, shows that getting in the break sometimes pays off.

How good was it to see riders from the breakaway group fight it out in the sprint at the finish today? The break went virtually from the gun and was whittled down to three riders with 12km to go and looked like their day was doomed as the peloton started to bring them back.

It was touch and go as to whether they would stay away but with no real concerted chase by any one team, the gap went up again. By the time the sprinters’ teams got themselves organised it was too late. With less than 2km to go the bunch was at full speed but it was obvious the winner would come from the three out in front.

A game of cat and mouse started with less than 1km to go and what a sight it was to see the bunch bearing down on three at the line but not quick enough to stop the Italian Marco Canola (Bardiani CSF) win the stage. This is massive win for Canola and his team and shows why riders try to get in breaks that look doomed from the off; sometimes it pays off and makes for exciting racing right to the line. 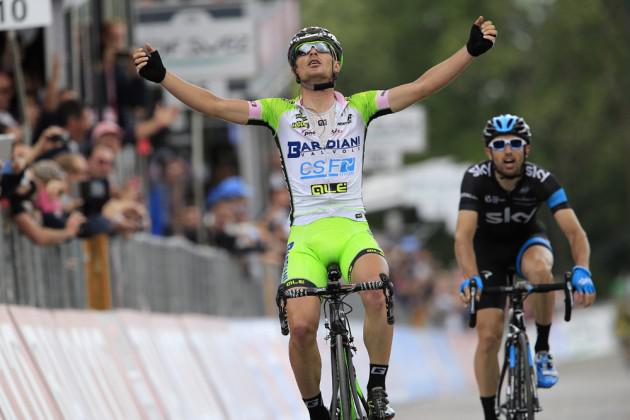 Enrico Battaglin snuck past the two favourites to take the stage.

When Marco Canola won Friday’s stage we thought that win had made the Giro for him and his Bardiani CSF team. Being a small Italian team a win in the home tour sets up the rider for years to come and helps the team to get invited back to the race despite their relatively small stature. 24 hours after Bardiani’s win his team mate Enrico Battaglin repeated the feat after another exciting finale.

Battaglin was in the day long break and was eventually caught and passed with 2km to go by Dario Cataldo (Sky) and Jarlinson Pantano (Columbia). It looked as though the winner would come from these two but as they started to cat and mouse with 500m to go Battaglin came back and went straight past Cataldo, who looked the strongest, to take the second Giro stage win of his career.

How good was the last 10km today? 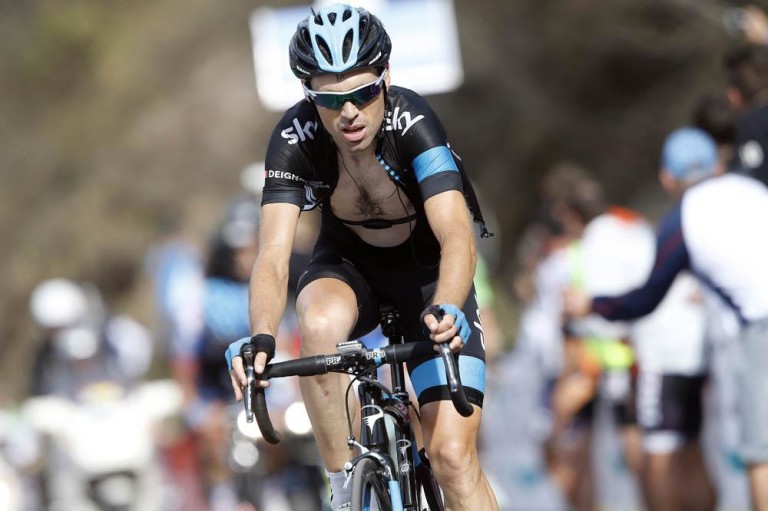 The last half hour of today’s stage had a lot going on. Just before the day’s break was caught on the last climb, they started attacking each other with each rider having a go. As soon as the favourites’ group caught them Irishman Philip Deignan (Sky) jumped clear into the lead and built a small but good gap.

With Deignan out front the favourites were content to sit and watch each other for a few kms before the fireworks really started. One after the other they began attacking each other, some were immediately followed some were steadily reeled back in but all seemed to be having a go.

Pierre Rolland (Europcar), Cadel Evans (BMC), Nairo Quintana (Movistar) and even the pink jersey Rigoberto Uran (Omega Pharma-Quickstep) all had a go. Deignan was eventually caught and Fabio Aru (Astana) soloed to the win but the GC riders behind showed they weren’t afraid to get stuck in and promises us more exciting days in the mountains to come.