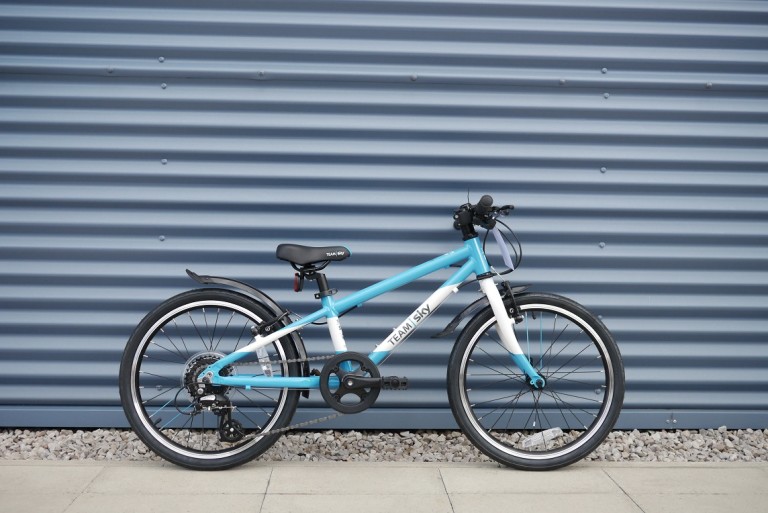 Suitable for around 10 to 12 year old Bradleys. This new sky blue and white paintjob is quite a bit brighter than the previous muted black paintjob. Frog bikes arn’t cheap but they are so much better made than other kids bikes. Light, functional, fun. The mudguards can be easily removed by the way. 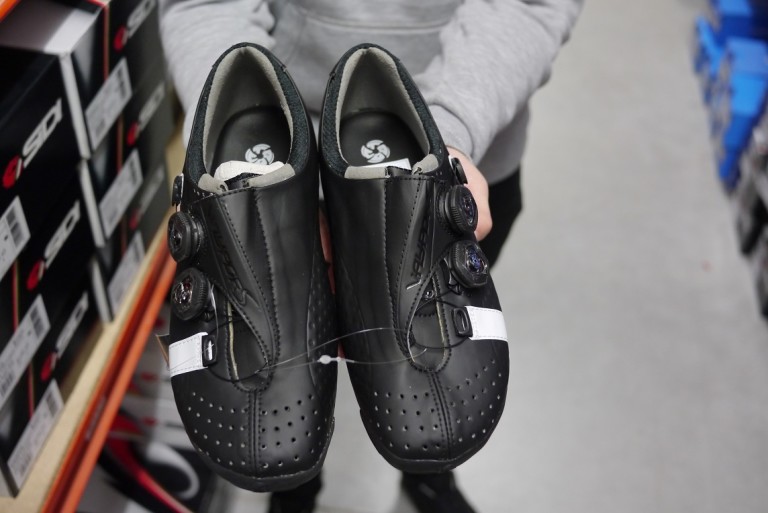 If Kevin Keegan rode bikes in the 1970s then his shoes would have looked something like this – and we mean this is a compliment! Seeing as we’ve mentioned his name, let’s all have a look at Keegan’s famously painful bike crash in the 70s TV show Superstars. Ouch indeed. Remember kids, never half wheel… 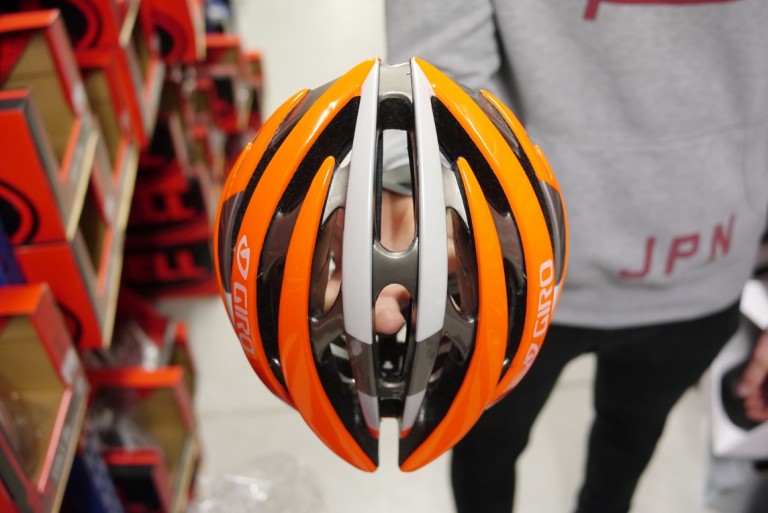 Kev Keegan should have been wearing one of these. Not that it would have saved him ripping all his shoulder skin off, mind. The Giro Aeon weighs naff all and – best of all – it’s available in this totally excellent orange and white colourway. 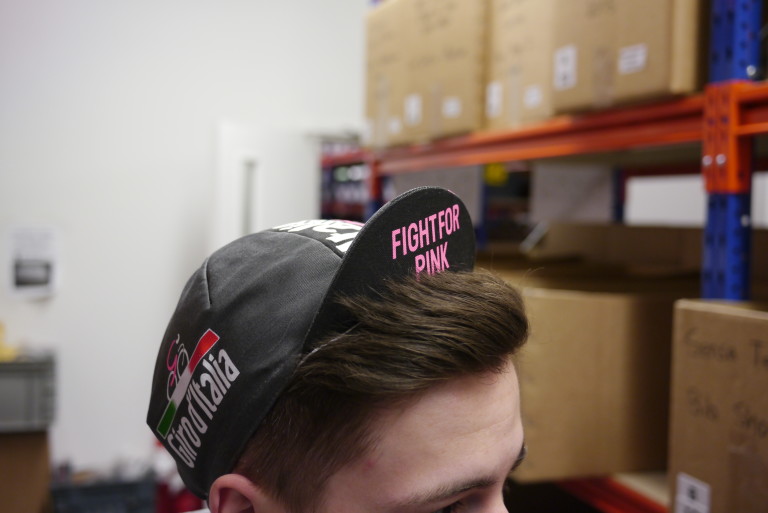 These aren’t really available to buy on their own. We’re currently running a deal where you can get one of these cute caps free when you buy any Giro d’Italia 2015 jersey. You will never tire of having to explain what FIGHT FOR PINK means to your friends and family. 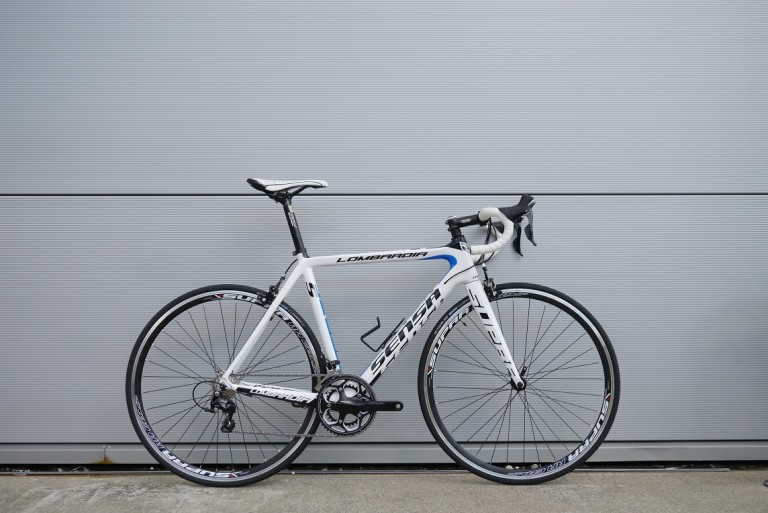 Although the Limited Edition black and metallic green version has many, many fans, personally I prefer this white and blue version. Whichever colourway you go for you’re getting a carbon frame and carbon fork at a really rather un-scary price. Nice. (Get the white and blue one.) 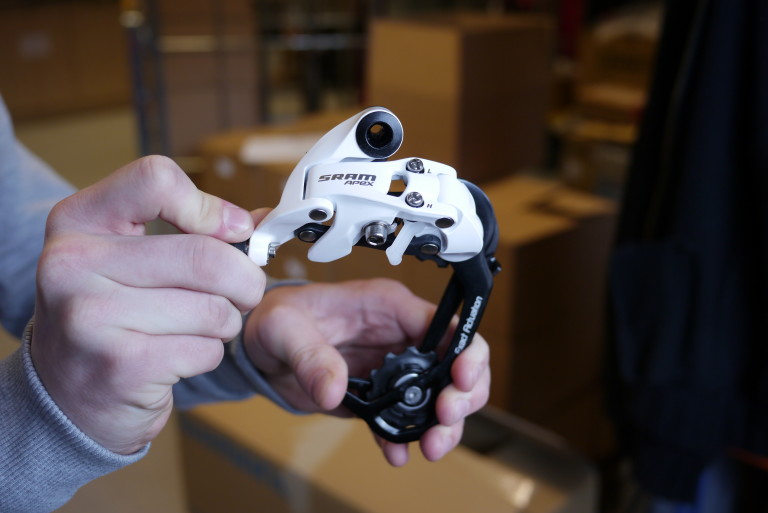 Building up a frame and fancy some not-black not-grey drivetrain bits? We’ve got extremely affordable Sram Apex groupsets in stock and they’re a bit of all-white. Geddit? 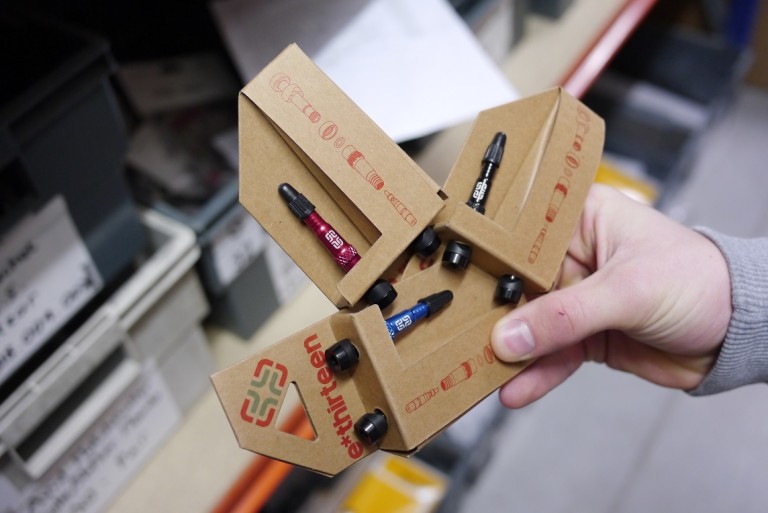 At first glance these things seem like the latest ridiculous step in chi-chi enduro parts blinging. But actually if you’ve lived with tubeless systems for a decent length of time you’ll appreciate the design touches to these. The cores don’t accidentally unscrew. The 2-piece design in durable and nips down really firmly. The valve mouth allows air to pass in much easier than most other designs. 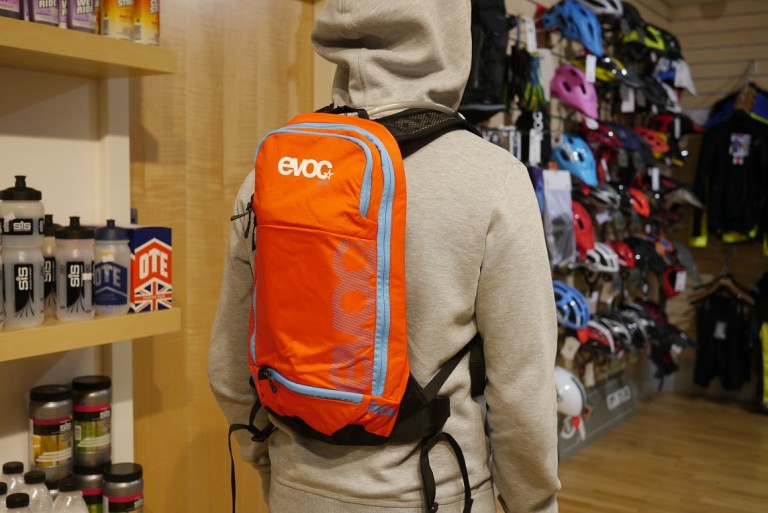 We’re selling more and more not-Camelbaks. There’s nothing wrong with Camelbaks (far from it – I don’t use anything else) but it seems people just want to try something else. And most of these folk are opting to try out an Evoc hydration pack. This CC 6L is a neat spring/summer choice when you can (hopefully) do without having to take as much spare clothing with you. 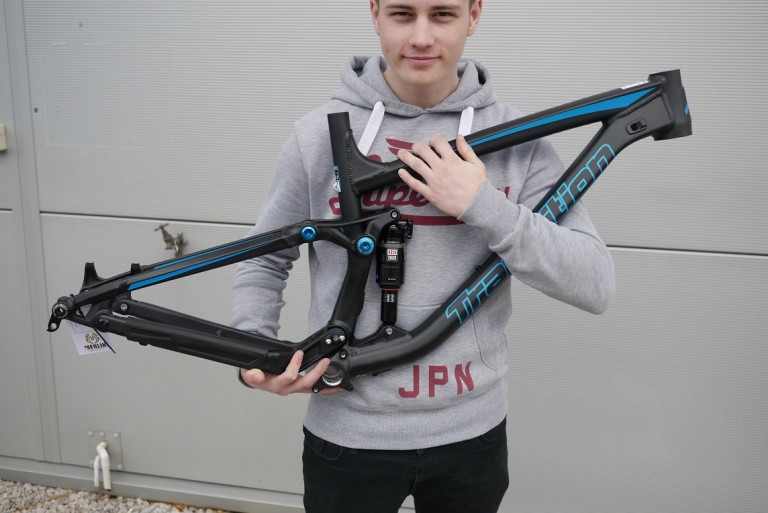 How much do you reckon Kane likes the Scout? He’s still not let go of it several hours after this picture was taken. And who can blame him? It’s one of those bikes from America’s Pacific north west that translates perfectly over to the UK scene. Enough travel to handle things without adding too much heft. Long, low and slack enough to handle being hurtled into anything. MBUK gave it a rave review recently too. 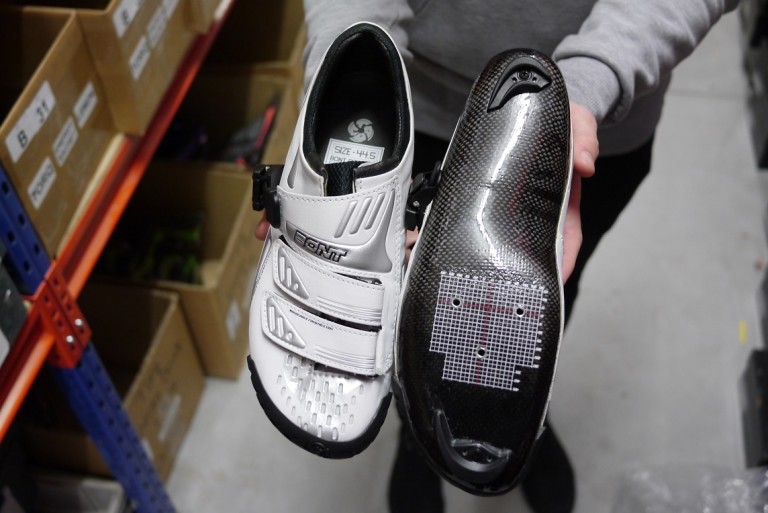 If you’ve fancied a bit of Bont on your feet but have been put off at the highish price tag – here’s your chance now. We’ve not got many of these so might have to act fast! Did you know Bont also make roller derby skates? 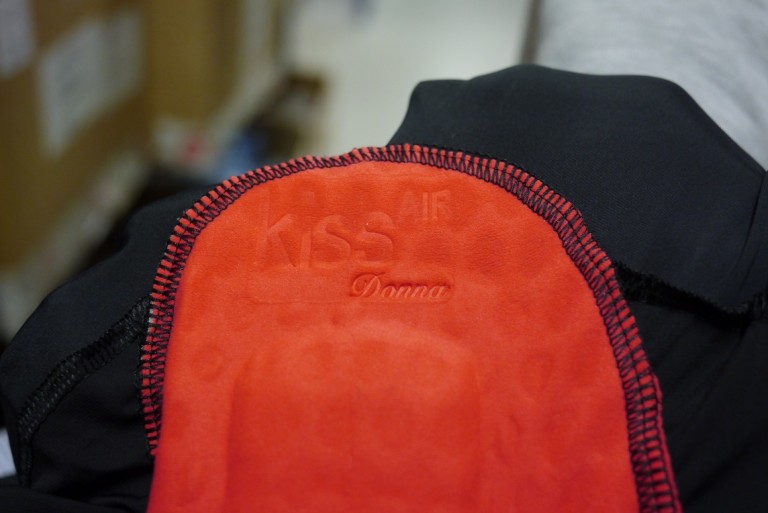 It’s always hard to take good pics of cycling shorts. So we haven’t. Here’s a detail shot of the pad instead. “If kiss Donna”? What’s that all about then? 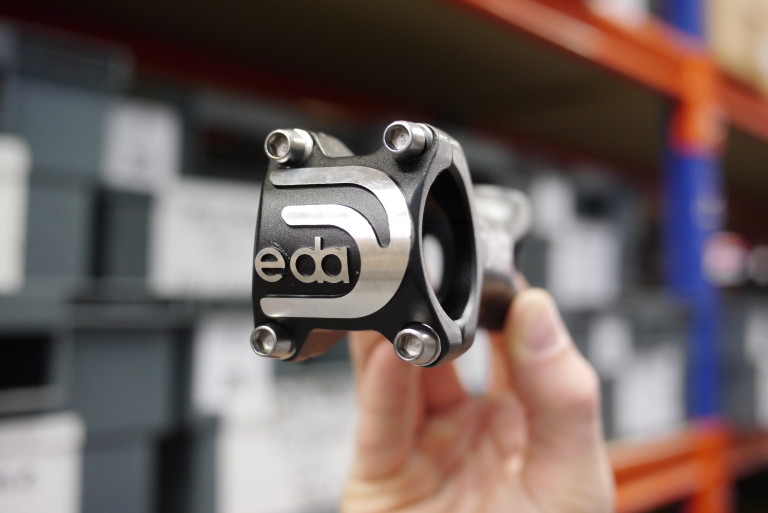 Are road stems getting shorter? are road bikes following the mountain bike trend of shortening stems and widening bars? The Deda Zero 2 stem is available down to 50mm lengths and goes all the way up to 130mm. Whichever length you go for, you’ll always enjoy this super-stylin’ front plate. 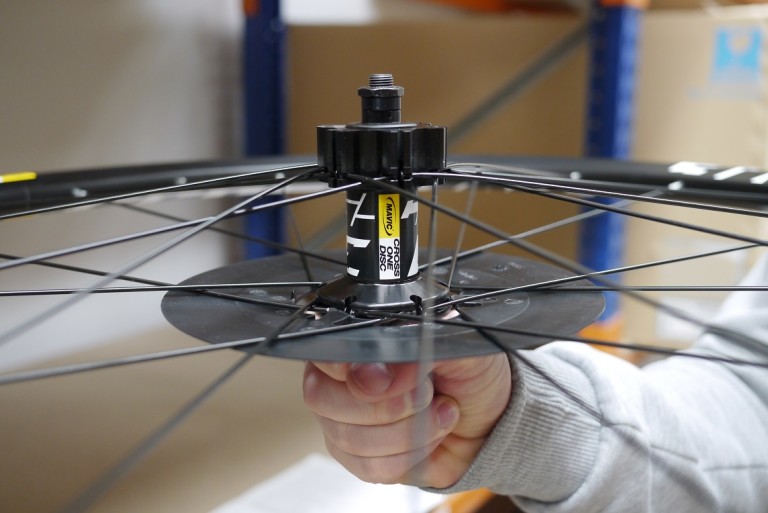 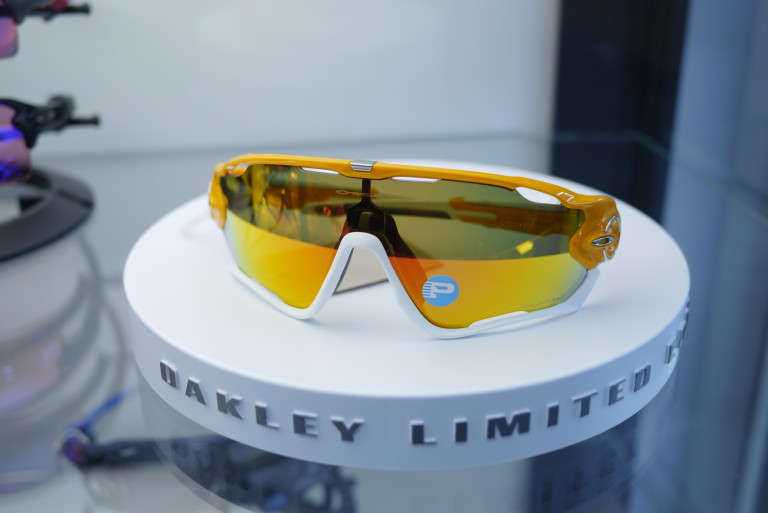 These aren’t just orange and white. They’re ATOMIC ORANGE and FIRE IRIDIUM. They are also extremely reminiscent of POC stuff aren’t they? So much so that it’s probably just an accident really. And actually, they also look a bit like early 90s Oakleys too. 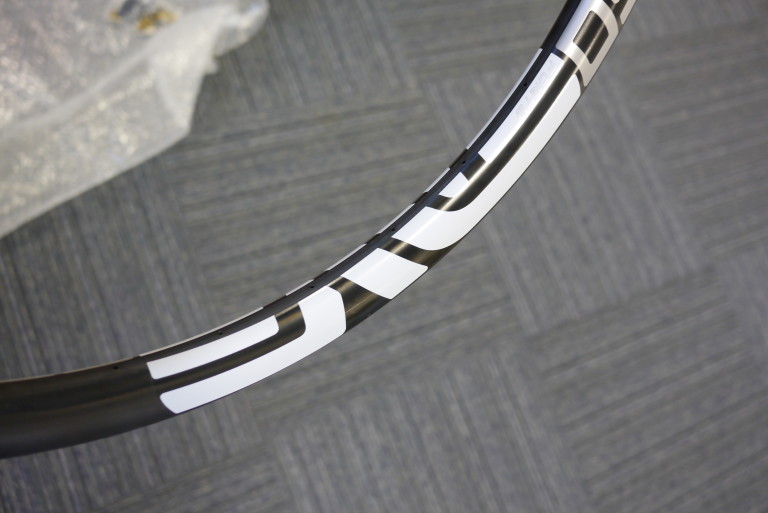 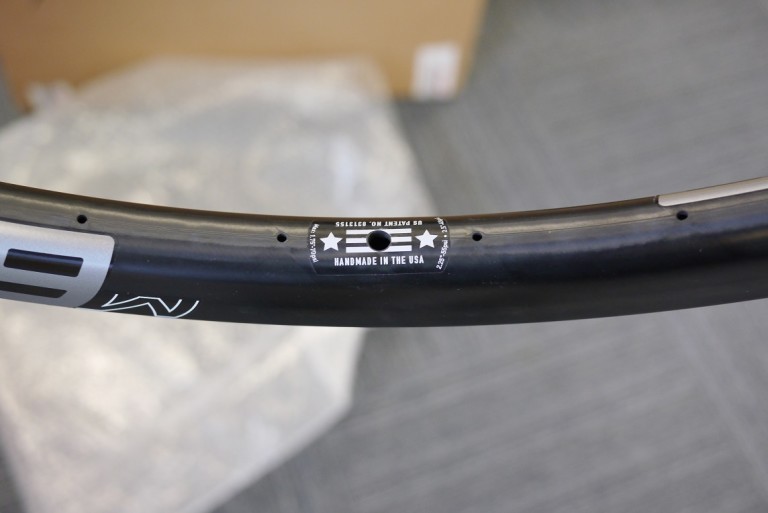 This is the nearest we can get this week to a carbon wheelset. But if we have to resort to just showing a carbon rim then we may as well show you the best of the best. We’ve got these rims in to get our wheelbuilder Tony to build up on to some Hope hubs. The rims are bonkers money but we’ve knocked a bit off the price of the hubs as a small gesture to y’all. Every little helps. 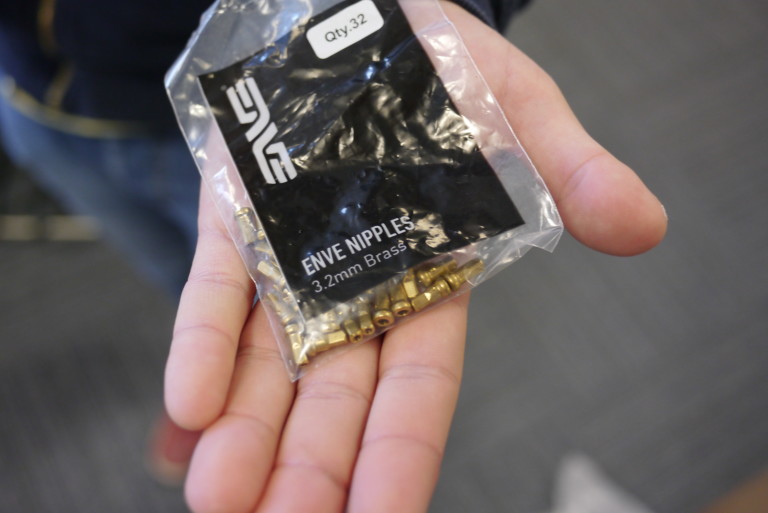