This one starts slow but finishes on a high. We’ve had a great week for cool stuff landing with us. Carbon wheels, colourful pedals and an irresponsible video. 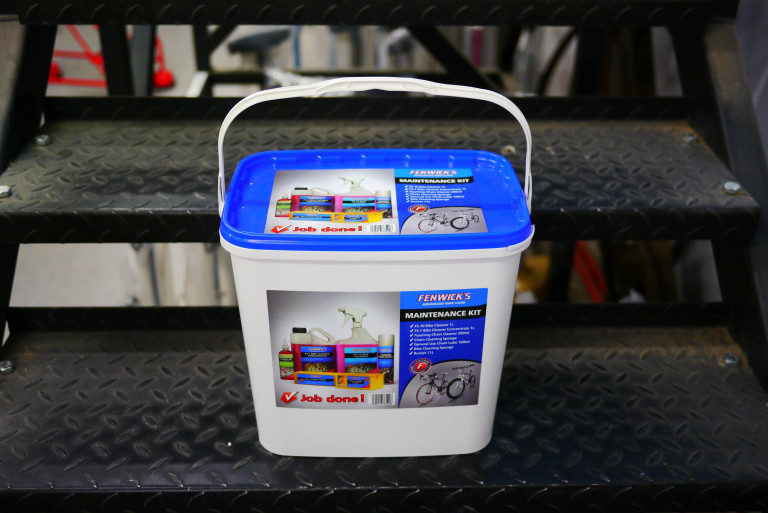 It’s almost time to start paying proper attention to how your bike looks (instead of just splashing some water over it and running inside the house to get showered and get some feeling back into your fingers). This one-stop-shop bucket from Fenwicks is a handy and good value way of starting afresh. 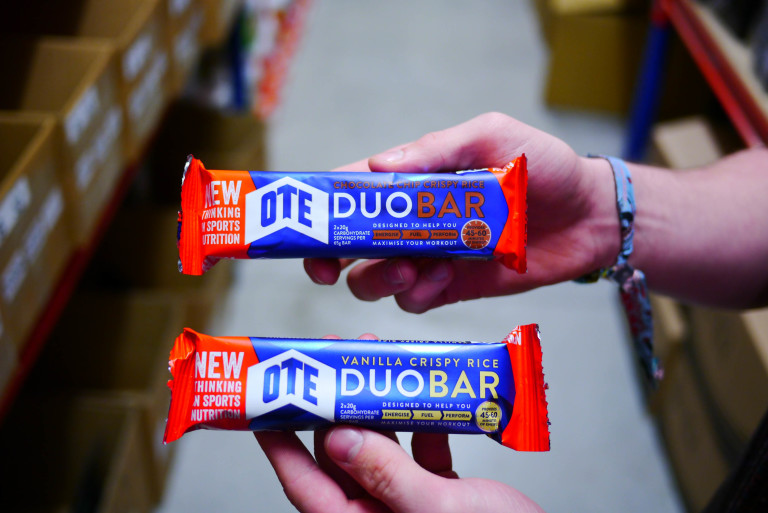 Energy bars from a new brand to us – OTE. Chocolate and vanilla flavours. We’ve not tried them yet so can’t vouch for their taste but we’ll let you know soon. Why are they called Duo bars? Because the bars are split into two pieces. Er, that’s it. 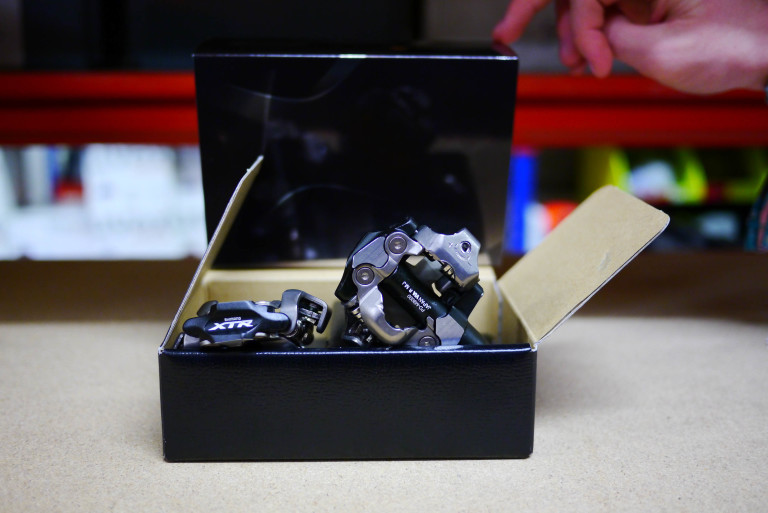 Mmm… these are surely the best mountain bike SPuDs of all time. Low profile, positive engagement and release, cool looks, quality bearings, large cleat contact area. If you have the funds (and they’re not that much these days you know) then there’s very little reason to use anything else. 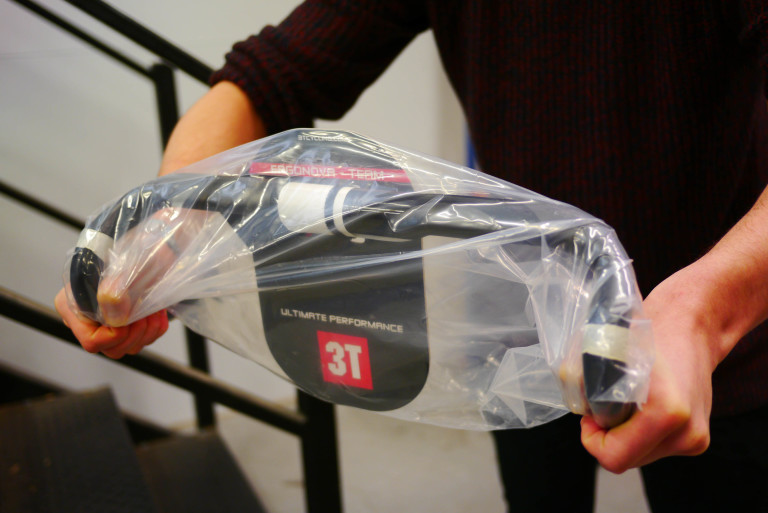 Pictured here in its aerodynamic waterproof sheath protector. Oh okay then, it’s just in its plastic packing bag. Horizontally egg-shaped across the tops and vertically egg-shaped near the hoods,  round shaped in the drops. The ends of the bars flare out a bit, so the brake hoods are narrower than drops. 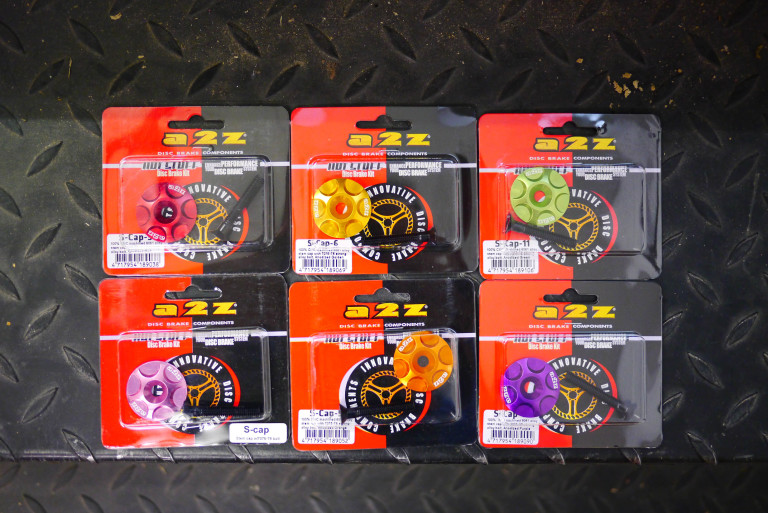 One for you Chris Froome fans out there. If you love staring at your stem as much as Da Froome Dog does then you’ll appreciate the opportunity to stick a bit of colour down there. 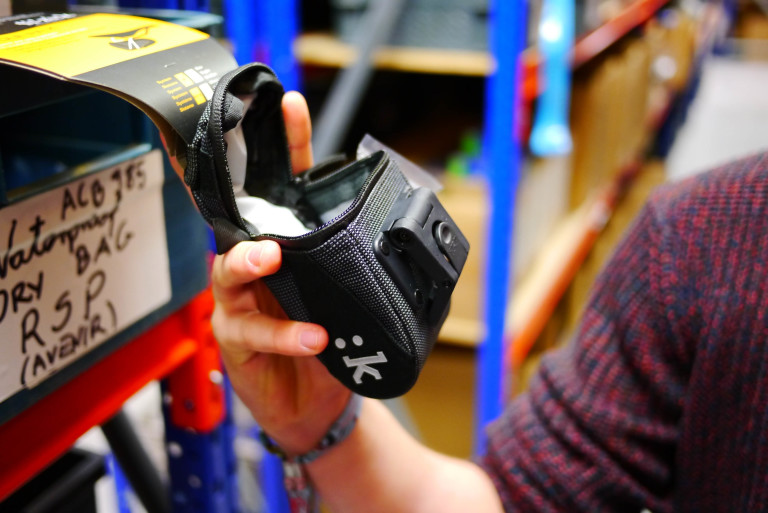 Fi’zi:k? Fi’zi:k! What kind of company sticks apostrophes and colons into their name? I mean, honestly! Having said that, their seat packs are very probably the best ones you can get. Especially if you already own a Fi’zi:k saddle that has the rear docking port – the seat pack just slots in. Done. 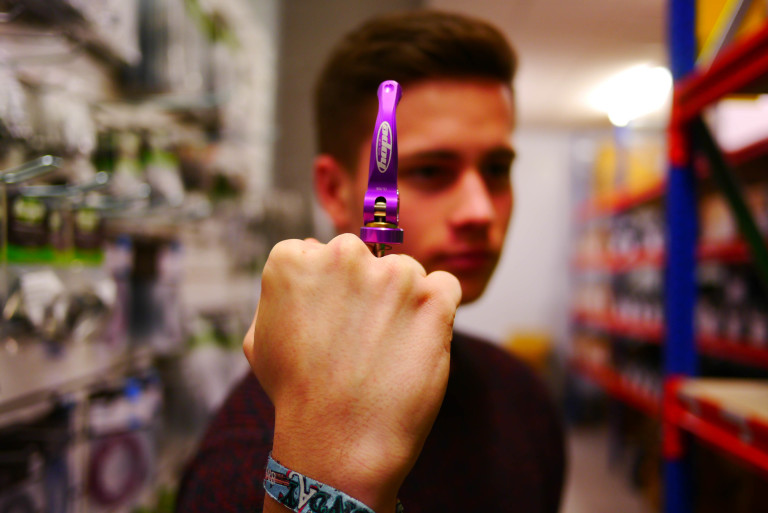 Our lad Kane is so young that he thinks purple anodising is a new thing. He was spared the horror excessives of the nineties cycling scene. Lucky lad. Hope handily sell skewers in singles. Most mountain bikers these days will be running bolt-thru forks up front but a lot of folk will still require a QR for the rear wheel. Possibly even a purple one. 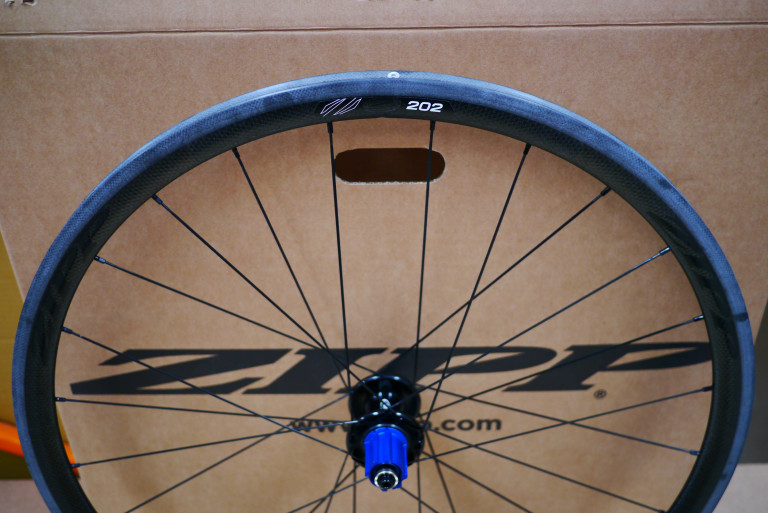 Alberto Contador’s wheel of choice. An all-round (hah!) wheel that is light, stiff and a little bit aero. When you’re splashing out serious dollar on some wheels it’s good to know that they’ll see some use. 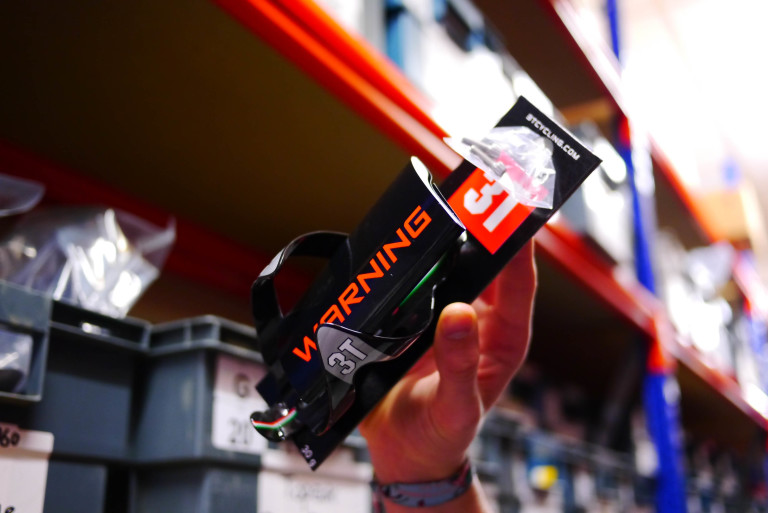 It’s not the best pic is it? Sorry about that. We just wanted to show off the ‘WARNING’ instruction manual that comes with this bottle cage. We say “instruction manual” it’s actually more like an “instruction novella”. Maybe it’s in there to stop this super lightweight cage from blowing away in a mild breeze? 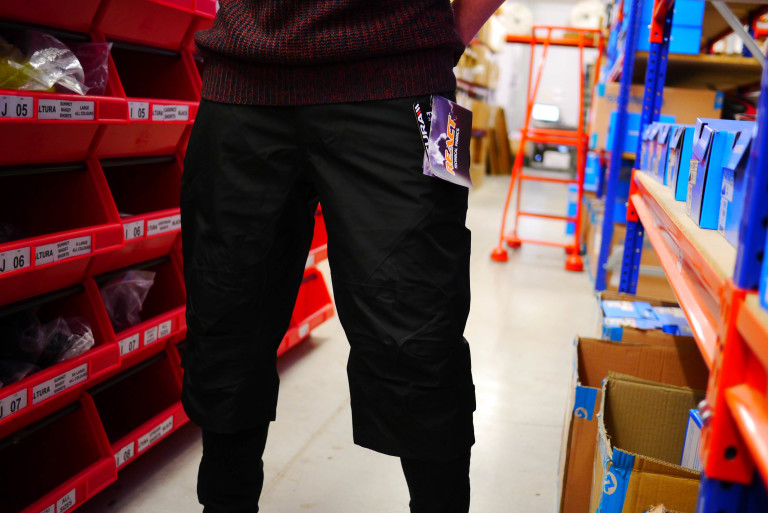 There are few garments more British than these. Most of the rest of the world don’t ride bikes when it’s really filthy weather outside. If us Brits didn’t ride when it was filthy we’d rarely ride at all. Jackets for your legs. Great Britain. 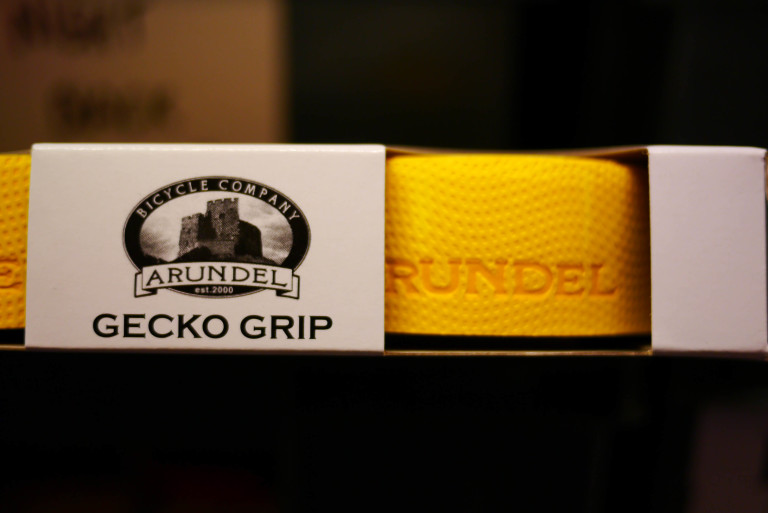 Great name. Great colour. Great bar tape. That is all. 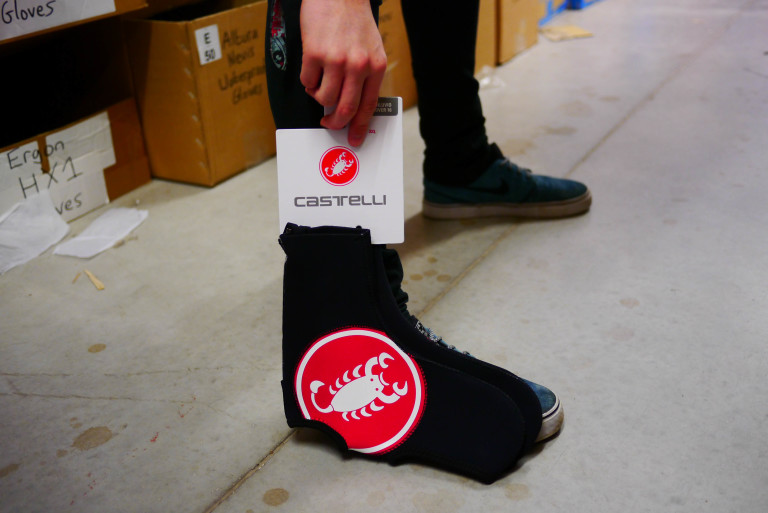 As cycling socks have become longer so too have overshoes. These are the new addition to Castelli’s range of Diluvio shoecovers that come with a 16cm cuff. 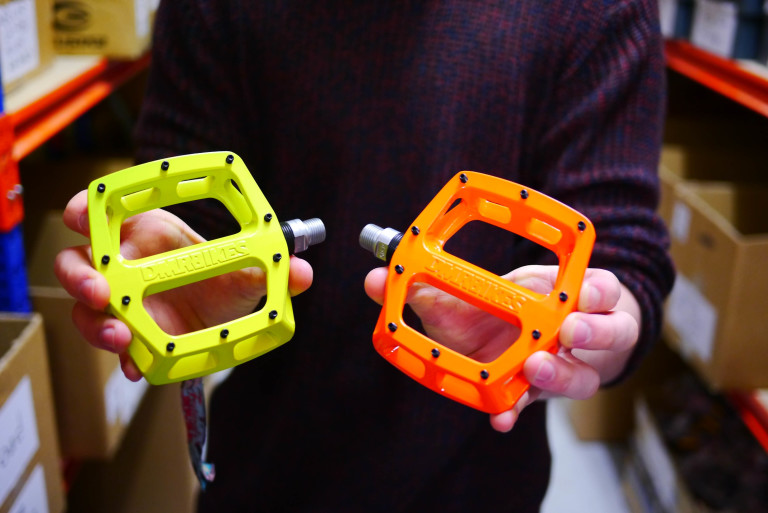 Last year DMR tweaked their iconic V12 pedal. The old pedal was looking a bit to chunky and tall for modern tastes and riding styles. The revised version is a great work of design. You can still tell it’s a V12 but it just looks a bit neater and contemporary. Hurray for facelifts. 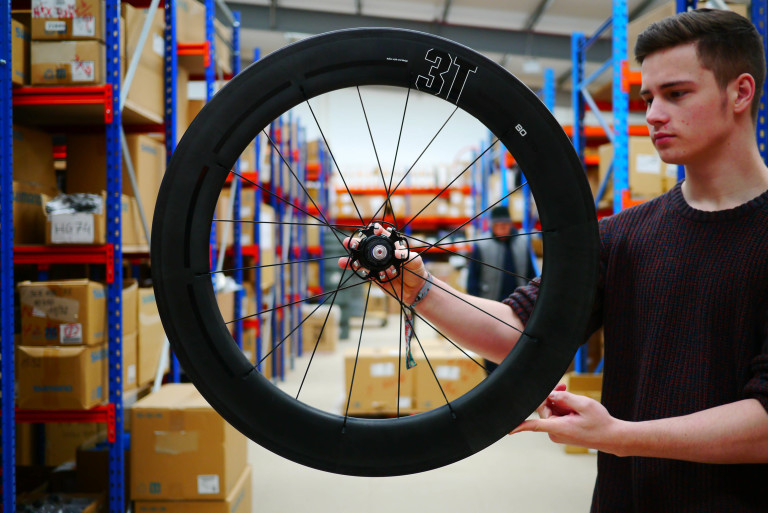 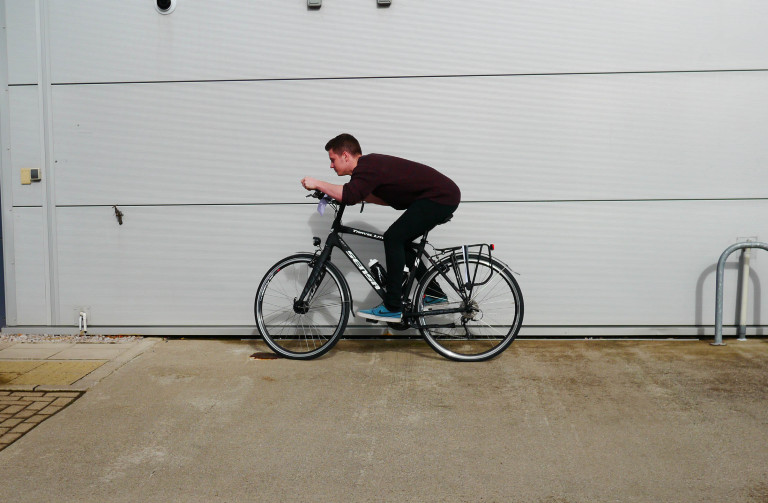 This bike has everything you need for a steady-away utility or commuting bike. It very possibly even has kitchen sink tucked away somewhere about it. Adjustable riding position, bar ends, kickstand, pannier rack, luggage straps. puncture proof tyres, rear LED and a front LED that is powered by a dynamo hub in the front wheel.