I’m by no means new to enduro racing but I’m not exactly a regular racer. I do one or two enduro races a year. Up until last weekend I hadn’t done a race of any kind in 2014. When a round of the PMBA Emduro Series came to a venue not very far from I live, it was too convenient an opportunity to ignore.

I signed up for the Sunday race. The full version of the event involved Saturday and Sunday with one day being total practice and the race itself involving a total of five stages located on three different hillsides. As a family guy, getting two days ‘signed off’ from Dad duties was never going to happen. 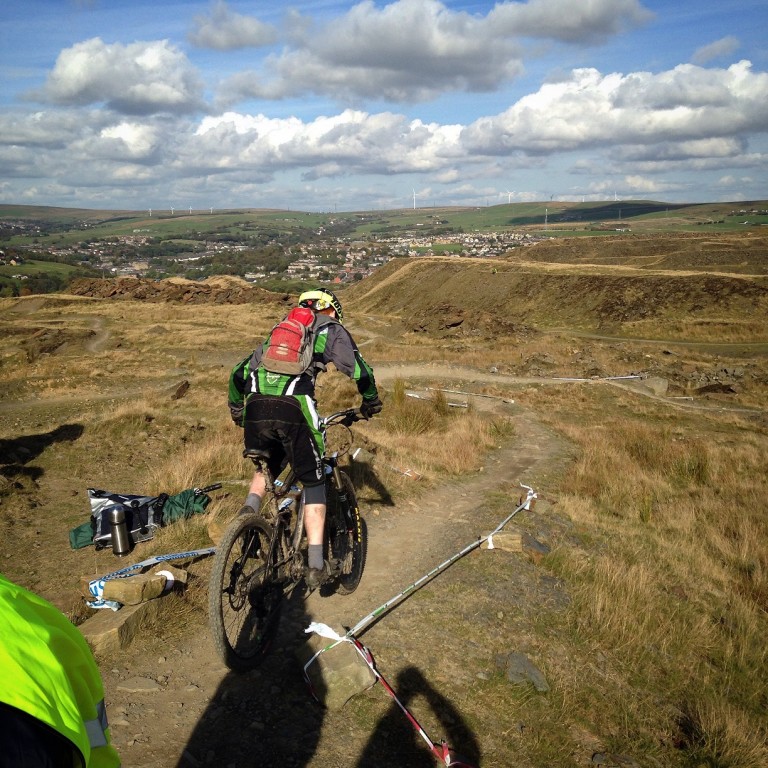 The enduro format suits me. A decent ride around with a few downhill-y sections against the clock. Like a lot of normal mountain bikers, it’s the race format that most loosely resembles what we do anyway.

What does a typical Enduro race day consist of?

Up and out of the house. Far too early really but I’d rather be stupidly early than horribly late. Quick visit to the petrol station to get some cash out of the wall (for lunch, inner tubes etc) and grab a(nother) coffee.

Arrive at race venue – Lee Quarry. Spend far too long choosing a parking spot. Doesn’t bode well for the day’s decision making! Head over to the sign-on tent to register and pick up my race plate and timing dibber. Go back to the car and ziptie the race plate to my bike. Very happy with my ziptie-ing handiwork. Put my riding clothes on.

Spot some friends who are racing and go over for a chat. Become a bit embarrassed of my battered, ropey old bike amidst their shiny expensive bikes. I take some solace that one of them is emergency-bleeding his brakes. My bike may look knackered but it works okay (fingers crossed) 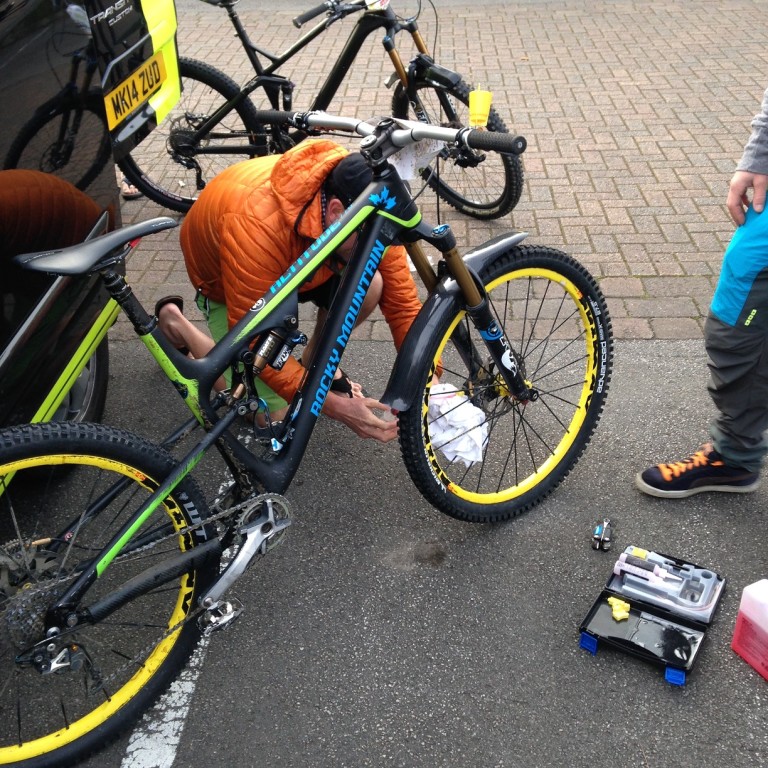 My brother (Matt) and his friend (Rich) finally arrive and we head up on to the hill to practice and to watch the “5 Stagers” race off down Stage 1. They’d done a couple of the other rounds in the PMBA Enduro Series so they had a good grasp of what (and what not) to expect.

On the way up to the start points we spot where one of the stages heads down. It looks steep. Really steep. I wasn’t expecting that.

Watching the 5 Stagers zip off down Stage 1 was a reassuring sight. Sure there were some impressively speedy riders present but most of the field consisted of normal riders like us. 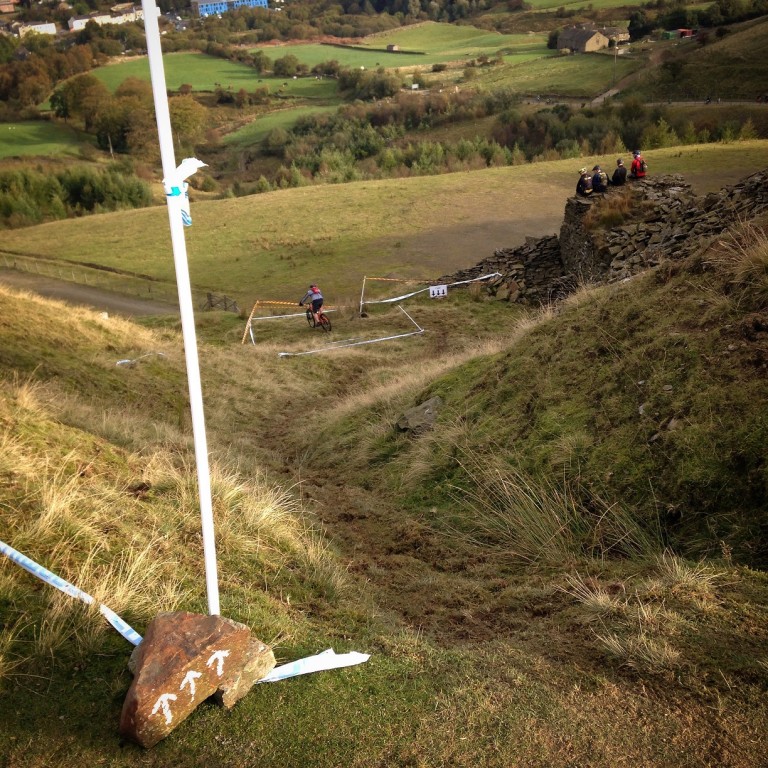 Stage 1 was off-limits to us “3 Stagers” for a while so we went off and had a look at Stage 5 (which we’d be doing as our third and final stage). Stage 5 practice went pretty well. I survived the aforementioned steep drop. No mechanicals. No sign of any nerves yet.

By this time Stage 1 was open for practice to 3 Stagers. During the ride/push up to the top we paused to watch some fellow riders practising. Rich and I spotted a cheeky-but-legitt little line that circumnavigated a couple of awkward dips. One to remember.

My practice run down Stage 1 went okay for the most part but I was surprisingly tired going into the final pedally section. I had to sit down briefly a few times due to complaining legs. Uh-oh.

The transition from Lee Quarry over to Back Cowm woods (the location of Stage 2) was when the day began to take on a definite enduro vibe. Small bands of friends making their way across the moors to practice the next racing zone. 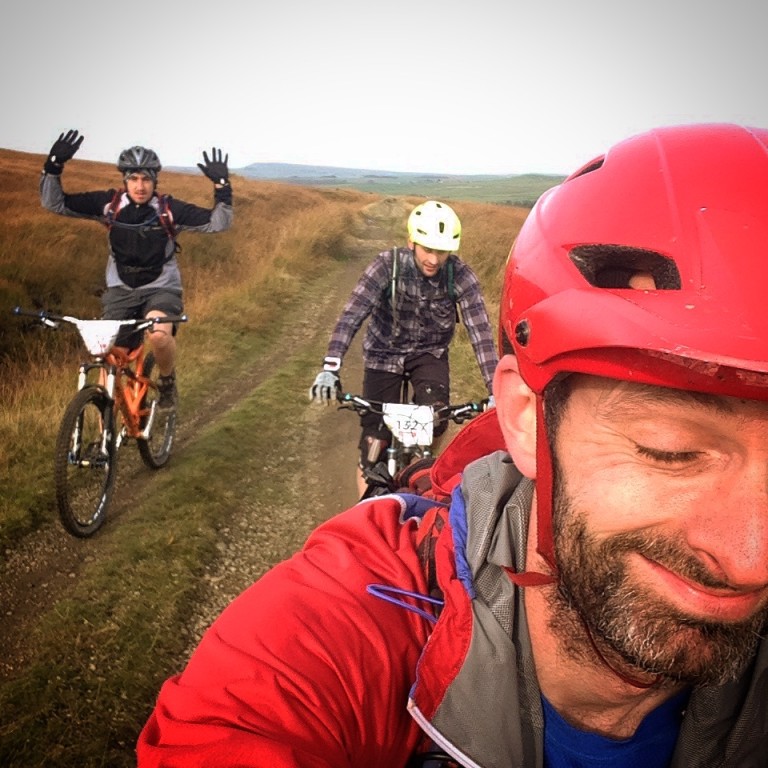 Happy travellers. Making new friends along the way. Shooting the breeze. It’s this aspect that you simply don’t encounter with other race formats. Obviously it would have been hideous if it had been hailstone-ing but hey-ho. The sun was out for us.

Waiting in line at Stage 2. The tail-end of the 5 Stagers were heading off on their timed runs, separated by thirty seconds and a whistle blow. Stage 2 started steeply and twisty. It looked great. Some riders were finding it all a bit much and crashed into the undergrowth on the first corner. 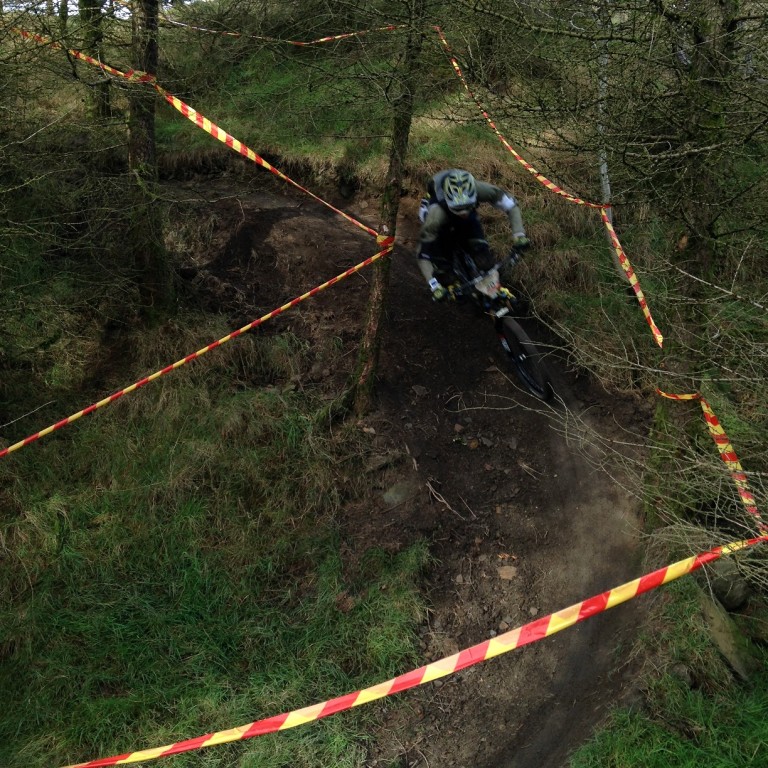 I tried not to watch too much as I found it was just making me notice all the things you shouldn’t do. It’s the waiting that can do you in. Once off on my practice run things went okay at first. It was difficult not knowing what was ahead – and we weren’t really allowed to stop once on the practice run – so it involved a bit of coming up short on jumps and tripod-ing over log lips and so on.

Then I had double pinch-flat. I hit a rocky section with a bit too much gusto (ahem) and my tyres quickly sighed out all their air. At least it wasn’t during a timed attempt. Two new inner tubes installed, pumped up (very hard) and I was off again. It was a nicely technical stage and one that I couldn’t wait to have another go at against the clock.

Matt did okay generally but has concerns about clearing a couple of the jumps. Rich had a crash fairly early up the stage but isn’t injured.

Back at Lee Quarry we lunched at a nearby cafe and chatted about the stages with some fellow racers. I loaded up with a grilled cheese sandwich, a Coke and a coffee. Not exactly ideal race fuel but it went down very well.

I give my bike a quick once over and it turns out it needs a whole lot of air. Just like my tyres that probably needed more air in them, my suspension was rather on the soft side too. Running 50% sag is a bit silly. Oops. Out with the shock pump and things are feeling lots better.

Racing for us 3 Stagers due to start from 1:00pm 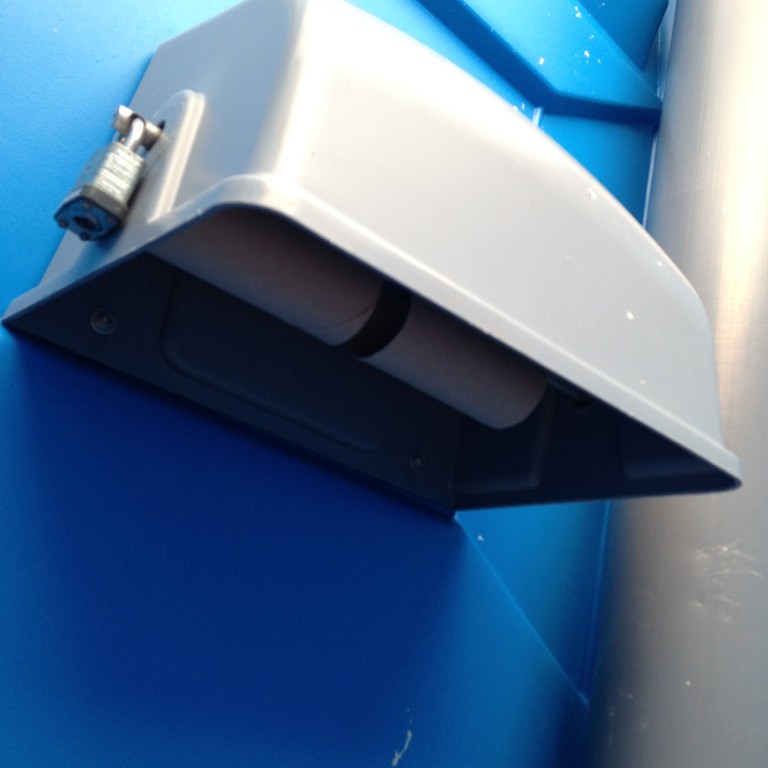 Well, time for us 3 Stagers to leave the car park area and head up on to the hill to have a crack at Stage 1 properly. I put my knee pads on and dig out my eyewear – a desperate attempt to inject some grrr into my riding!

Matt, Rich and myself arrive on the mound at the start of Stage 1 and join the queue. Racers can set off at any time, in any order, so we opt to go pretty dead last. We’re in no rush.

I dib my dibber and I’m off racing down Stage 1. 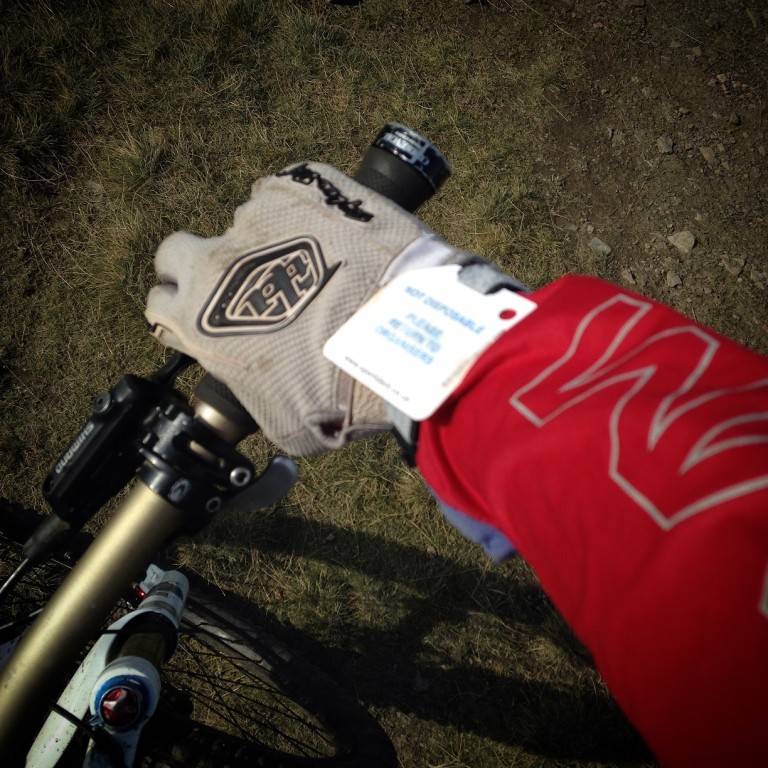 My chain skips as I set off from the start line. Uh-oh. It seems to calm itself down though.

I impress myself by actually remembering the cheeky-but-legit line and it seems to pay off. Nothing majorly goes wrong for the first half. I could possibly have put in a few more pedal strokes but I’m generally pleased to have not crashed or had a mechanical issue. The cheers heard on one steep-ish section make me smile.

Once again though my legs give out on the final straight. I could try a bit harder/longer but I’m concerned that I’d just have a silly off. Pretty sure it was a decent run anyway.

My brother arrives after me, cursing. Turns out he took a wrong turning at some point and had to get off and push back up something! Oh dear. Let’s hope this doesn’t spoil our happy day.

During the transition to Stage 2 my brother gets the nightmare of his Stage 1 calamity out of his system. Stage 2 feels like it’s a lot more significant now. I need to not pinch flat, my brother needs to stay on the course and Rich needs to stay on his bike.

My race run down Stage 2, Back Cowm.

The steep start goes well and sets me up nicely for clearing the first small double jump. Woo!

I remember that there’s the log lip thing up ahead and try to gee myself up for launching off it. As I get to it I pull on the brakes. Boo! No tripod-ing this time but it could have been a whole lot faster. 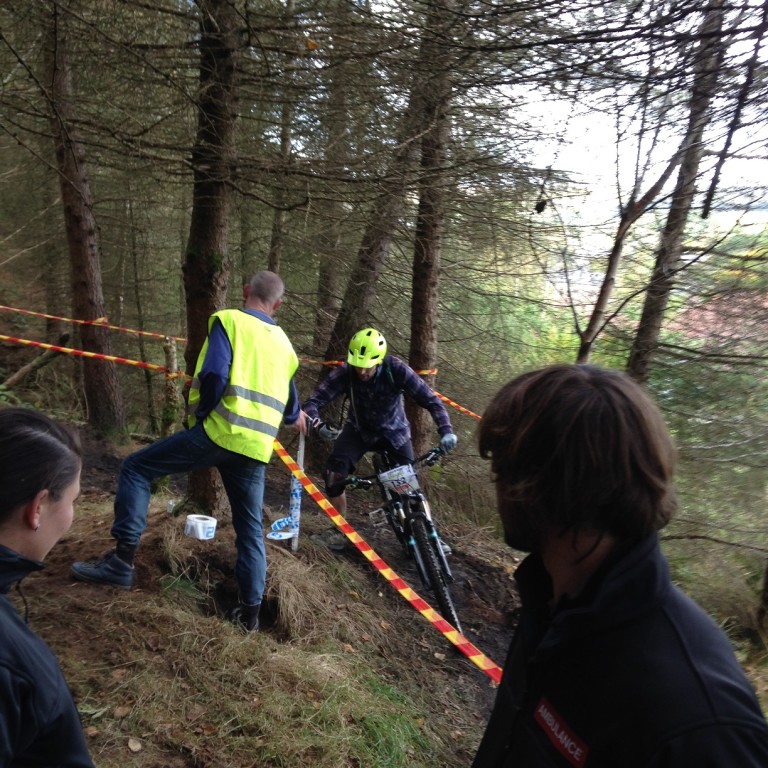 The final section I can’t remember a lot about but it went very well I think. Very happy with Stage 2 overall.

My brother comes in. He didn’t get lost this time.

Rich comes in. He crashed at the same spot again. But his last section looked to be really quick from what we could see.

Queueing for Stage 5 (our third stage). Stage 2 and the transition links had felt rather quiet. We were back markers with the place to ourself pretty much. Back at Lee Quarry lots of people reappeared. 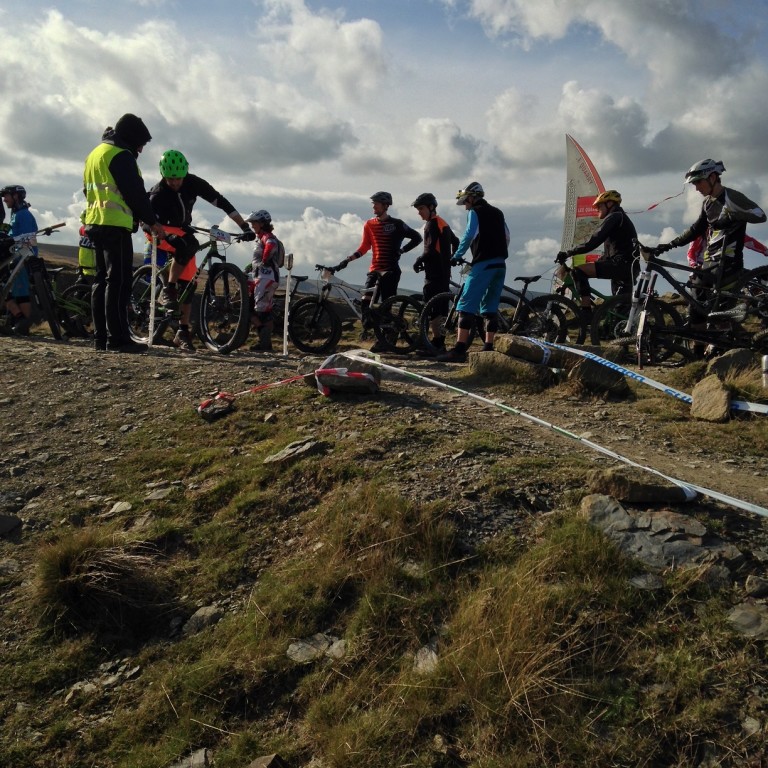 The queue was the biggest one of any of the stages but it was all very civilised and good natured. I was glad of the opportunity to rest my legs.

My race run down Stage 5.

The opening awkward switchback goes… awkwardly. Never mind. The next section feels more like it. A bit of flow.

A camera flash goes off mid-jump and I think to myself “I think I looked pretty good there actually, I’ll have a look for that pic online tomorrow”.

Into the stupidly steep section. I hit the intro far too fast and have to put a foot down to point myself in the right direction at the turn. I just about make the hard right turn and pop up over a little ridge.

All of a sudden I see and hear loads of people around me. Spectators. Someone yells my name. “I’ll do me best!” I shout back at them. Good fun. The run-out is slippery and loose but I get away with it. The crowd cheers. Yay!

And then the wheels fell off. Not literally. Again, a Stage is just a bit too far for my legs/effort. I’m kind of surprised at how much I struggle to pedal hard for the last sections. The stages aren’t actually that long. I clearly lack sustained power in my legs.

I cross the line with an odd mixed emotion of delight (in the race vibe) and disappointment (in my legs).

Matt and Rich soon follow. Both pleased with their final stage performance.

Back in the race arena checking out our results. I think everyone expects me to have done a better time than my brother (Rich is too much of an unknown!). I certainly assume I’ve beaten my bro and I think he does too. 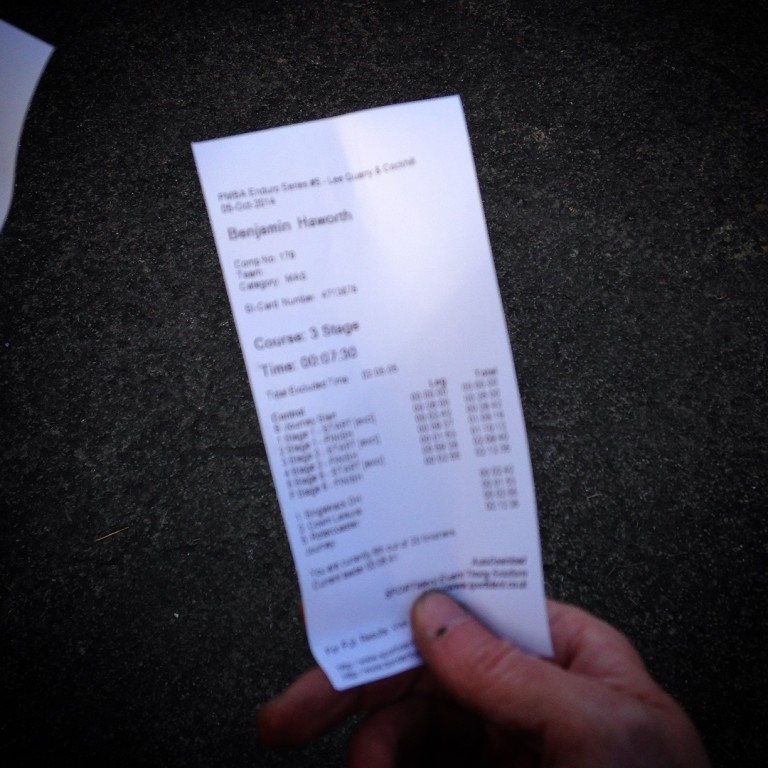 But I haven’t. Matt’s beaten me by nine seconds overall.

It actually takes us quite a while to work it out as the results print-out doesn’t tell us what we’re expecting to see.

I just about beat him on Stage 2 (by two seconds) but he put in faster times on Stage 1 – despite the wrong turning! – and on Stage 5.

I almost instantly begin thinking of how I can beat him next time.

Driving home mulling over where I could have done better.

Browsing online for a new bike.