When two tribes go to war. There’s only one thing cyclists love more than riding a bike and that’s bitching about how fellow cyclists are wrong about something. 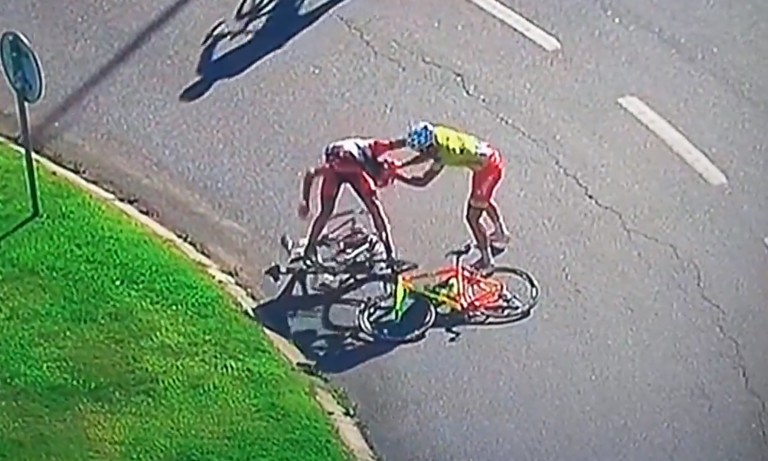 Campagnolo used to have it all their own way. Everyone with a decent bike had Campagnolo on it. No brand has cycling heritage and prestige like Campagnolo does. Then the 1980s came along and Shimano attacked.

Essentially Campagnolo weren’t prepared or equipped to bring out new things with the same relentless frequency as Shimano did. Shimano’s STI units were arguably the biggest thing. They struck a blow that Campag has arguably never entirely recovered from.

Campag stuff is always a bit more expensive than Shimano. But it does look nicer to many people’s eyes and some people prefer the ‘feel’ of it and get on better with the ergonomics of Campag hoods.

This used to be a right old ding-dong. Roadies were boring. Mountain bikers were juvenile delinquents.

But then we all just sort of grew up.

Road bikes came back into fashion. And now everyone pretty much dabbles in a bit of everything.

Well, we still find the time to have inter-disciplinary arguments like hardtail versus full suspension or sportive versus racer.

The anti-mudguard argument is admirable in its simplicity: mudguards look ugly.

The pro-mudguard arguments are legion. Mudguards keep you comfier. Mudguards stop your clothing getting wrecked. Mudguards extend the life of your bike. Mudguards protect your fellow riders from wheel spray.

But yes, mudguards are ugly.

Remember the days when all mountain bikes came with 26″ wheels and we all knew what was what? Them were the days eh?

Nowadays there are three different wheel sizes to choose from (well, the last time I checked anyway). New boy 27.5″, original 26″ and the big ol’ 29″.

It’s the latter size that arguably started all of the hoo-ha. 29ers came out into the vaguely mainstream in the early 2000’s and wheel size became a thing.

What’s all this 27.5 thing about then? It’s complicated. It’s a mix of genuine advantage, marketing hype, 29er-phobia and suspension compromise.

Every wheel size will have its fans. They will each hate the other wheel size.

Taking performance enhancing drugs is wrong. All cyclists technically agree on this. But what if everyone is doing it?

The doping debate is not so much a ‘for’ and ‘against’ argument. It’s a ‘realist’ versus ‘idealist’ debate.

Armstrong may have had his Tour De France victories taken away from him but how many of us are confident that the 2nd place riders were clean?

This is on road bikes. The mountain bike world gladly embraced disc brakes several aeons ago.

Even in the trad world of cyclocross the war is pretty much settled. Sure, some cx racers prefer cantis as they’re lighter and, let’s face it, pro racers don’t really use their brakes much. Most non-pro cx riders/racers have made the switch to discs.

But ever since Colnago bunged a set of Formula disc brakes on one of their road bikes there has been a fairly heated debate about it.

The initial reactionary outburst arguments have calmed down a bit now actually. The arguing parties can be split into three camps: pro racers, traditionalists and normal people.

Racers have genuine concerns over weight, frame stiffness and aerodynamics.

Although the Downhill MTB scene has a mild hoo-ha about riding clipless pedals or flat pedals, the real proper arguing about them goes on in the BMX racing world.

No one argues as to which is the fastest – SPDs all the way – the debate is more about the ‘morality’ of using clipless pedals on BMX bikes. It’s simply not cricket.

The key point is that being able to control your BMX around a race course without having to be physically attached to your bike is one of the skills of BMX. SPDs are cheating.

SPDs are faster though and it’s often those who cross the line first who make the rules.

Tyres. How we cyclists all love to obsess about rubber.

In the road and cyclocross world there’s the debate about tubular tyres versus clincher tyres. Racers and other obsessives use tubs (sealed air-filled sausages that you glue on to special rims). Mere mortal normal people use clinchers.

Mountain bikers have the tubeless debate. Tubeless proponents are adamant that it’s worth the faff of setup and repair. Everyone else just puts an inner tube in and gets on with their life.

Steel is real and all that guff. But there’s no denying that a skinny tubed steel bike just looks… right.

Aluminium has never managed to get itself a proper fan base. Just when it was starting to find one, carbon fibre came along and grabbed all the limelight.

Competition is just another form of argument isn’t? And with Strava we get to argue about whether it’s actually proper competition or not. Bonus!