Welcome to my second blog. I’m here to share my experiences as a paracyclist training on the British Cycling Development Programme 2013.

So, how did I get here?  You may wish to read the last blog then come back to this one as it contains my backstory. Suffice to say, I’m actually very lucky.

I love riding my bike. When I realised I wanted to compete again, I got in touch with Manchester velodrome to enquire about events and, after a Paralympic fest event, I was invited to attend a number of British Cycling talent confirmation events.  These involved rigorous training, testing (more testing) and official certification in the C5 category.

I still can’t quite believe that I’m now officially a C5 Paracyclist on the British Cycling Development Programme 2013 monitored by Team GB.  I’m certain of my ambition however – to race at the Rio Paralympic Games in 2016 for Team GB. 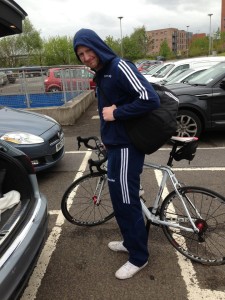 So, I recently had the first 4-day training session as part of the British Cycling Development Programme, what was it like?

Well, we were based at the Manchester Velodrome and the camp involved Watt-Bike Testing, Road Riding and Track Riding amongst other things. I was happy to now be putting out 1560 Watts which is pretty good going.

I was very proud to be given British Cycling kit, so my new place on the Programme now feels official. I’ll be attending a training camp every month and having distant support whilst my progress is closely monitored over the next 12 months.

The next step would be to progress on to the Olympic Podium Programme and to win medals as part of the British Cycling Squad.
The main Cycling events are the Paralympic Games; World Championships; European Championships; World Cups and the National Championships (visit: http://www.britishcycling.org.uk for more details).

There are currently about a dozen people on the Programme in a variety of paracycling categories including mine. All have interesting stories to tell, half are fully funded by British Cycling – mainly the youngsters as they potentially have 2 stabs at Paralympic victory. I appreciate that I only have one shot and am planning to give it my all.

Suffice to say, on the resistance testing and both the road and track races, I was the fastest. My team and I also competed in a road race and I came 10th overall (including ablebodied) on my old heavy cyclocrossbike, winning the paracycling category.

The highlight of my first training camp was sharing the track with Jason Queally and Craig MacLean – both Olympic Legends.

Hopefully there’s plenty more inspiration to come in my next training camp in June, I can’t wait! 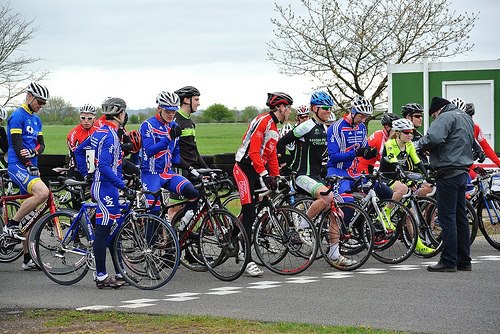 This year I intend to ride all of the Paracycling National Points Series which are circuit based races and also the national championships on both the Road and Track.

I have just started training with a bespoke plan that focuses on the Paracycling Road Race Nationals In July, then focus my attention on the Track Nationals in September.

I’m currently winning the Paracycling Road race series after 4 rounds and have just received delivery of my new Sensa Giulia (this is an old post and the linked content no longer exists) which is super quick, so should give me an extra bit of pace.